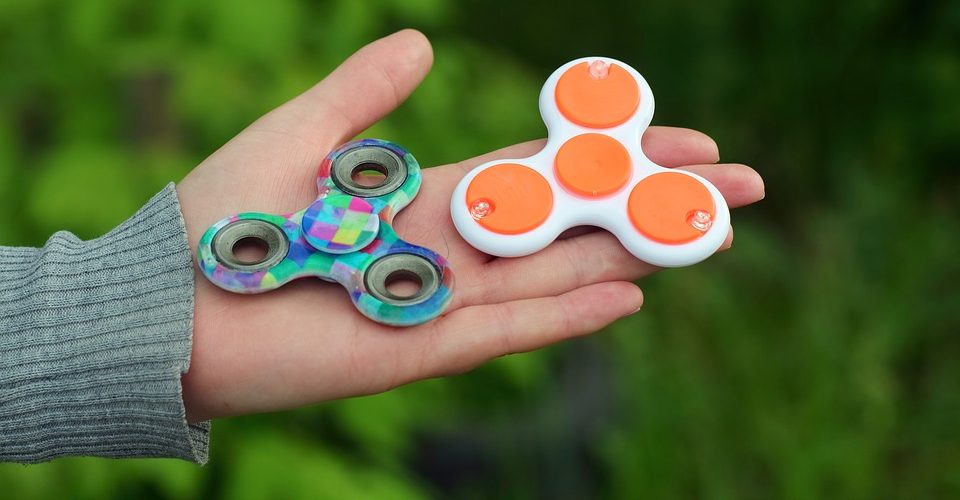 by Joseph Flynt
Posted on September 8, 2022
15 Shares
3D Insider is ad supported and earns money from clicks, commissions from sales, and other ways.

Fidget toys caught on in the last decade, most notably when fidget spinners became extremely popular. Nowadays, fidget toys are recognized as more than just ‘toys’ – they are helpful outlets for people dealing with anxiety, stress, or boredom. People diagnosed with OCD or ADHD can also benefit from regulating emotions using fidget toys.

The great thing about fidget toys is that they are so simple that they work exceptionally well with 3D printers. They are typically small and involve several moving parts. Check out some of the best custom 3D printable fidget toy designs that you can download right now. 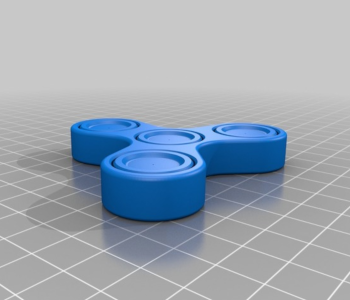 The fidget spinner is a classic fidget toy. It’s small enough to play around with in one hand, looks great when it’s spinning, and requires virtually no thought to use. This one-piece print is a 3D printable take on the classic fidget spinner design that eliminates the need for metal bearings.

Instead of metal bearings, the model integrates movable print-in-place bearings into the fidget spinner. Make sure to print with a good slicer and calibrate the X-Y clearance of your 3D printer. You might miss the heft of a fidget spinner with metal bearings, but this version is so much easier and less expensive to make. 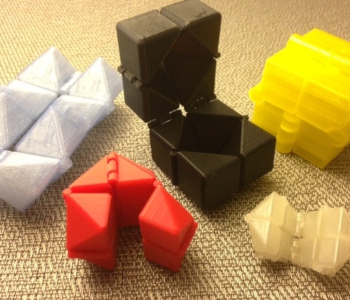 Being able to print moving parts in place is probably the best reason to design fidget toys for 3D printers. This particular model is a cube that has been divided into segments that can move along hinges. All hinges are print-in-place, so the cube is fully functional after 3D printing.

The moving segments of this cube are what make it interesting, as they can be rearranged into different shapes. This is great for when you are trying to come up with creative ideas or if you just need your wind to wander off into somewhere relaxing. As with any print-in-place model, make sure that your clearances are well-calibrated. 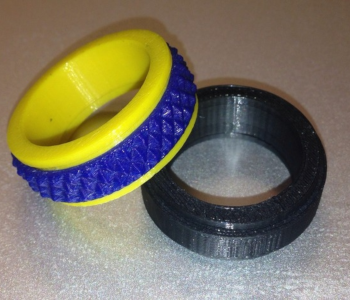 Fidget toys that fit in your pocket are great, but what if you can just wear them instead? This fidget spinner ring is great for giving your fingers something to twitch on without being too obvious about it.

A fully customizable ring, the model is split into three parts that interlock when assembled. You can scale the rings according to your size and print them in your preferred colors. You can even have several of these in different color schemes so you can choose one according to your mood. This is a fairly simple project and should be easier to print than a print-in-place model. 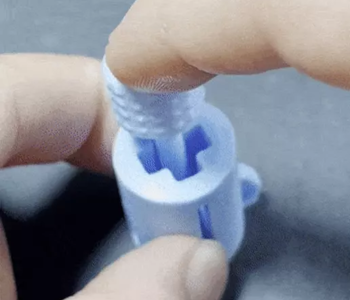 Here’s a pretty unique idea for a fidget toy – one that is patterned after a gear shift stick. This model definitely appeals more to car drivers, but the smooth motion along the X-Y axis should satisfy anyone who just needs to do something with their hands. The shaft of the stick itself is also rollable, providing another axis of motion.

The fidget shifter ticks many of the marks needed for tactile stimulation. Aside from the linear and rotational motion of the stick, the knob itself is studded and has a curved head. The extra texture is very pleasing to the touch. If you want a fidget toy to keep around your workspace, the fidget shifter is excellent for keeping your hands and brain occupied. 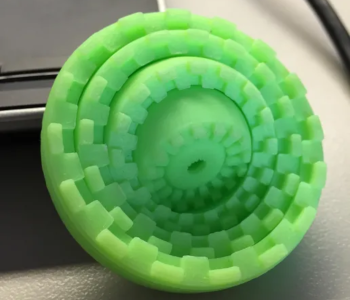 Parts that interlock with each other without any complex assembly are a staple of 3D printing. These also make excellent fidget toys since the parts can move within the assembly but typically cannot be broken apart. This collection of models includes four different interlocked things.

All objects in the collection are small fidget toys with moving parts. Clearance resolution is important, as is printing at small layer heights (0.14 to 0.2 millimeters). Printing with solid infill is recommended for added strength and to make the toys somewhat hefty despite their sizes. 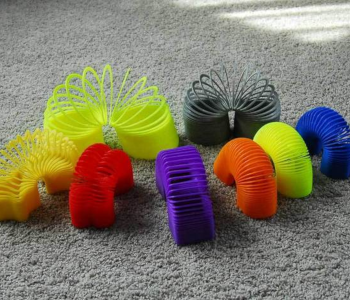 Slinkies were the original fidget toys before fidget toys were even a thing. You can play with them with one hand or both hands, have them tumble down from your desk, or just watch them descend a staircase. Despite being a fairly simple toy, the genius design of slinkies has had an enduring appeal.

This set of 3D models comes with all manners of slinkiness from the classic circular Slinkies to the more unusual ones shaped like a star, circle, or even Pac-man. Each slinky prints in a single piece held together by a removable outer sheath. The coils will then have to be separated from each other, ideally with a small knife. A flexible but durable material like ABS would be the optimal choice for printing a slinky. 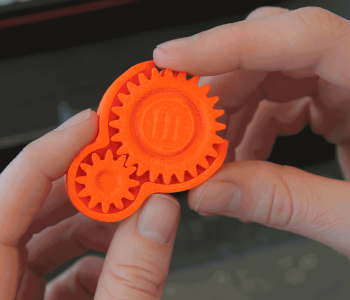 Fidget toys do not always need to have a complicated set of moving parts. This Fidget Gear is as simple as it gets – a pair of connected gears that move along with each other. These are small enough to fit in your pocket and can be played around with just one hand.

The Fidget Gear is also a good model for checking the accuracy of your printer’s X-Y clearance. The gears should rotate freely without any post-processing under ideal circumstances. It is recommended to print this model at a low layer height (0.2 mm) but the infill can be reduced to as low as 10%. Printing with a raft is recommended to avoid warping and to facilitate print removal from the bed. 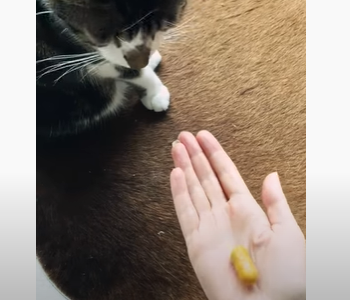 You have probably played with a “magic bean” when you were young. It’s basically a small capsule-like object that always stands upright on account of an embedded metal ball. It’s one of those things you can play around with mindlessly, which is great for keeping your hands and eyes busy.

Instead of printing the capsule in two halves, the instructions for this model state that the print should be stopped mid-way and the metal ball dropped inside the capsule. This makes it a single-part 3D printing job. It’s one of the simpler fidget toys on this list and one that we would not mind having multiple copies of. 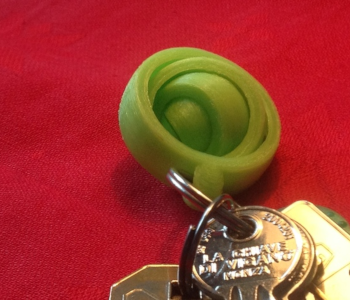 Gyroscopes are contraptions that have rings that can rotate along different axes. Aside from being mesmerizing to watch, gyroscopes are also fun and relaxing to play with. If you’d like to have your very own mini-gyroscope, then this keyring is an easy print-in-place 3D model.

This three-ring gyroscope is basic but is also just compact enough to be a practical keyring. You can certainly go bigger – there are models out there for a 6-ring or 8-ring gyroscope. These also make great gifts that are much more engaging than the standard keyrings. 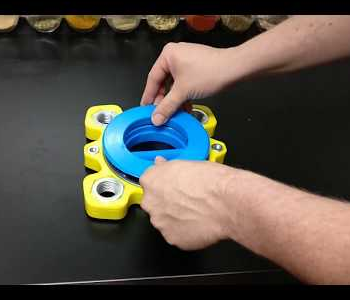 What better way to finish this list than with a giant fidget spinner? This super-sized spinner is both large and heavy – it contains multiple metal bearings and nuts. The whole thing weighs 2 kilograms when finished, so this might even double as a workout device.

More importantly, the fidget spinner rotates freely as intended because of the metal bearings. It is an impressive build and is certainly a mesmerizing fidget toy to play with. You will want to use a strong filament for this project, such as ABS, PETG, or Nylon. You might also need a hammer to snap the parts together for assembly.

Fidget toys are small contraptions with moving parts that are made to ease feelings of anxiety and stress by keeping one’s hands and brain busy. It can also help you come up with ideas when you’re stuck in a rut, or just to stave off boredom.

The great thing about using a 3D printer to make a fidget toy is that there are lots of downloadable designs out there. You can make several fidget toys for yourselves or give them out as gifts, all for a small amount of filament and a few hours on your 3D printer.