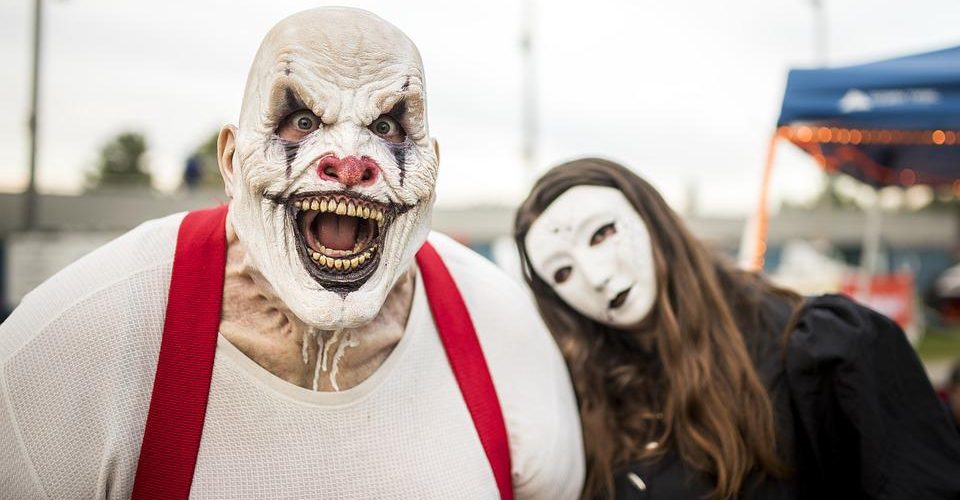 by Joseph Flynt
Posted on August 12, 2022
17 Shares
3D Insider is ad supported and earns money from clicks, commissions from sales, and other ways.

Is it too early for Halloween? Not if you’re aiming to make the best costume ever! A good Halloween costume can take several months of effort. A huge part of this process is just coming up with the idea. Don’t worry – we have a few brilliant ones that may inspire you.

If you own a 3D printer, then you already have a huge leg up over any competition. 3D printers have been extremely useful for creating custom-built props and costume parts. In this article, we will be focusing on an essential part of a costume – the mask. Here are some amazing 3D models of masks that you can print. 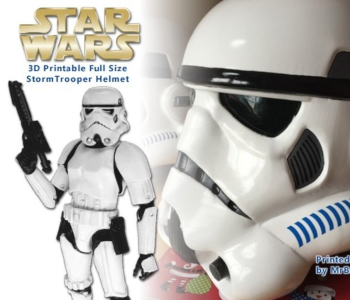 Stormtroopers are not exactly known as great shots, but they do have very nice masks and armor. For Halloween, you will be sure to turn quite a few heads if you show up in a 3D-printed replica of a Stormtrooper costume. Even the mask or helmet is impressive enough already takes quite a bit of work.

There are 20 different files that you will need to print for this Stormtrooper mask, so make sure to plan well ahead for this build. Each piece will have to be sanded and polished to get that signature shiny Stormtrooper finish. By then, you might be tempted to go all the way and 3D print the entire armor set. 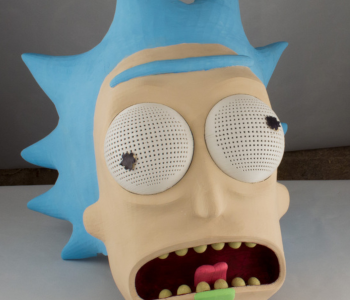 The disturbed genius Rick Sanchez from the popular Rick and Morty series has proven to be one of the more recognizable animated characters in the last decade. This mask perfectly captures the heavily deranged and unhinged personality of Rick while sticking true to the artistic flair of the show.

Again, the model is made of several parts that have to be printed separately. You will need some super glue to put them all together and some drywall putty to fill in the seams. The beauty of this mask is that you just need a lab gown, a cyan shirt, and brown pants to complete the look of this time-hopping super scientist. 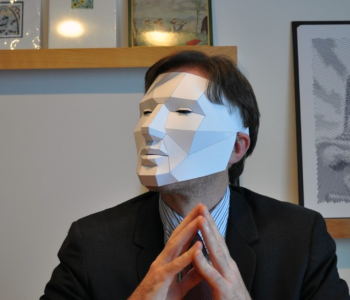 If you want to be just really creepy this Halloween, here’s a brilliant mask that does the job so elegantly. This Low Poly Mask looks right at home in the uncanny valley. It looks close enough to how a human face should look but just different enough to make other people uncomfortable.

It is also essentially a blank canvas that you can personalize. You can color it in with funky colors or just a slightly threatening shade of red or black. Though seemingly simple, the Low Poly Mask also needs to be printed in a few separate pieces. It certainly requires much less effort than the other entries on this list, making it great as one of those emergency Halloween costume ideas. 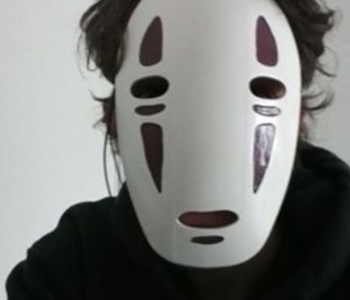 No-Face from the Spirited Away animated film is equal parts endearing and disturbing. This spirit is most recognizable via this simple white mask with a slight smile but a blank expression. This is a fairly simple project that you can 3D print within a single day.

Again, this is a fairly low-effort Halloween costume idea. Just print the mask, finish it with some paint, throw on a black hood, and you’re golden. Most people will recognize No-Face easily because of the character’s distinct design. 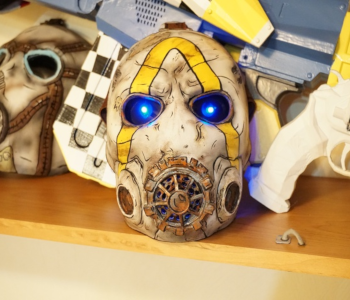 Video game fans are probably familiar with the mask of the Psycho bandits from the Borderlands series. An instantly iconic design, the mask has been a trademark of the video game franchise. It’s quirky, cartoony, but also slightly deranged.

Despite seeming like a simple build, the mask is actually made of 26 3D printable files. Some of the pieces are quite small and can be printed simultaneously. The bulk of the work for this mask is in the assembly, finishing, and painting steps. The tough part is simulating the art of Borderlands using solid colors and thick lines. You can even go the extra mile and add eyes that light up! 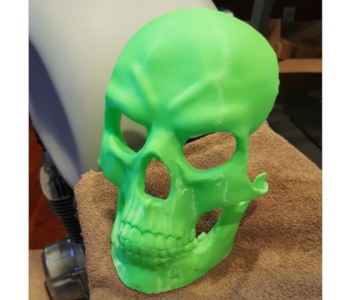 Let’s leave the land of pop culture for a while and go back to the basics. Nothing is more fundamental as a Halloween costume than a mask in the shape of a skull. This specific mask puts a bit of a twist on the concept, giving the skull the appearance of making an evil grin. With this on your face, there will be no mistaking that this is indeed an evil skull.

This Evil Skull mask is one of the few Halloween masks that you can 3D print as a single piece. It’s a simple and easy project, yet very effective. If you’re still fairly new to 3D printing, this mask can be a good entry-level project while doubling as an emergency Halloween costume. 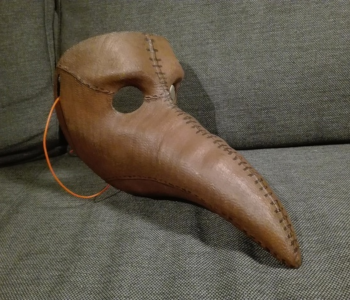 Is it too soon to wear a Plague Doctor mask while we’re still in the middle of an actual plague? Maybe, but a bit of tongue-in-cheek humor might be the best thing for the coming Halloween. With just a black hood as an accessory, this is also a pretty easy Halloween costume.

The creator of the model of this mask provides separate options for how it can be printed. If you have a printer with a large enough build volume, you can print the model as a single piece. There is also an option for smaller 3D printers to print it in separate parts. 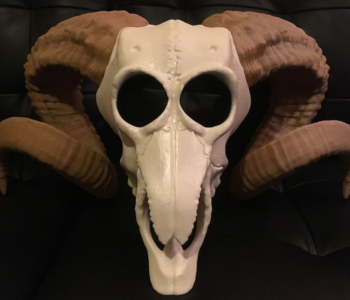 An advantage of 3D-printed masks is that they can be super-sized but not exceptionally heavy. That is certainly the case for this ram skull mask with its exaggerated eye holes and horns. You will have your work cut out for you to print and finish this mask, but it will definitely catch attention at a Halloween party.

As with any large 3D printing project, expect to spend between 1 to 2 weeks just printing this behemoth skull. This will need to be printed in separate parts and glued together in post-processing. You will also need to add some soft foam padding to the inside of the mask to make it snug and comfortable against your head and face. 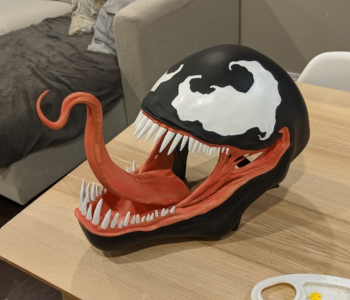 Venom is a comic book character that has enjoyed a surge in popularity in the past few years following two fairly successful movies. This character also has an extremely dynamic design with a long tongue, sharp teeth, and a very wide jaw. This material is great for masks.

This oversized Venom mask is really more a helmet than a mask, but this design perfectly captures the exaggerated features of Venom. There are lots of separate parts in the design, but the best strategy would be to 3D print them all in black. This will cut down the work needed for painting. 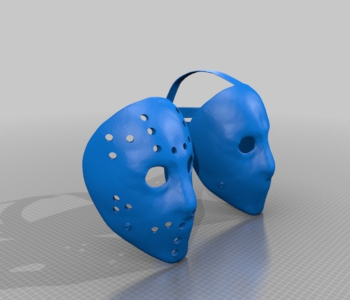 Let’s wrap up this list with a classic. In the realm of horror movies, few masks are as iconic as that of Jason Voorhees from the Friday the 13th series. The Jason character has elevated a standard hockey goalie mask into an emblem of terror. It is also a fairly simple mask to 3D print.

The great thing about making a mask for a character as disheveled as Jason is that you don’t even need to spend so much time polishing and smoothing the final product. Throw a few splotches of paint on it and you can call it a day. Don’t forget the raggedy clothes and the ever-present machete!

A 3D printer is an amazing tool if you’re into the whole hobby of dressing up as characters. There is no better time to show this off than Halloween. It’s still a few months off, but who says you should not start getting ready early?

A mask is a great starting point for making a homemade costume. If this mask will be the centerpiece of your costume, then it’s worth the time and effort to make it perfectly – so get that 3D printer working!