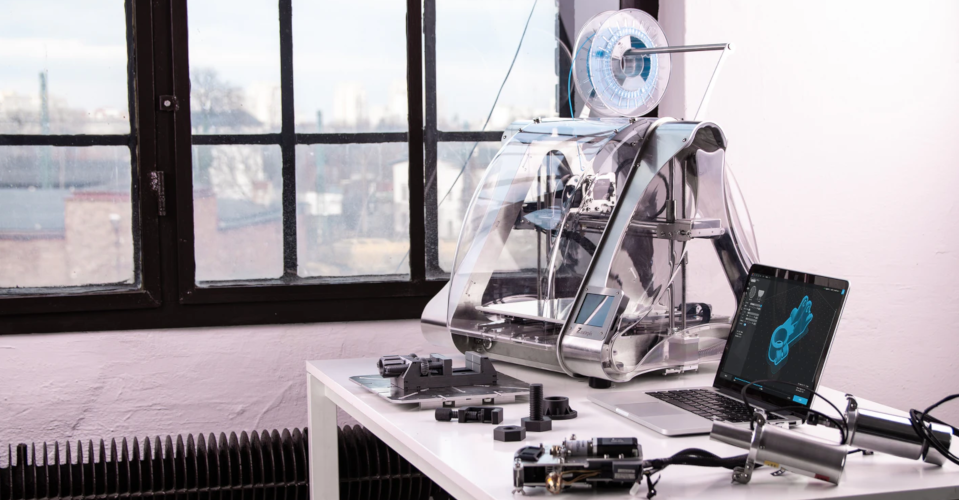 by Joseph Flynt
Posted on October 6, 2020
27 Shares
3D Insider is ad supported and earns money from clicks, commissions from sales, and other ways.

At its very core, a 3D printer is just like any machine that requires maintenance. Its mechanical parts get worn down and its electronics cease to function over time, which means that they need to be replaced. Lubrication is also a huge part of this maintenance.

With proper lubrication, you may extend the useful life of the components of your 3D printer and even improve output quality. Which parts of a 3D printer need lubrication and what makes a good lubricant? What are some of the best lubricants for 3D printers?

Why you need to lubricate your 3D printer

To better understand the importance of lubrication, let’s look at the primary objective of applying them on any mechanical part – to reduce friction. By applying a lubricant to moving parts, you can reduce friction-related wear and ensure that parts are moving as smoothly as intended. Lubricants are typically applied to parts with metal-to-metal contact, although specialty lubricants are also manufactured for other materials such as plastics.

Lubricants also act as barriers between metal parts and the moist outside air, thus reducing the chances of corrosion. Over time, excessive corrosion can compromise the mechanical integrity of metal parts – not to mention that rust is simply unsightly.

In the context of 3D printers, there are certain parts that would particularly benefit from lubrication. The bulk of the movement in a 3D printer is that of the print head. The print head moves in all three axes (x, y, and z) according to g-code commands that were generated from the model processed by the slicer software.

To restrict the movement of the print head, it is tethered to rails corresponding to each axis. There is typically a bearing that sits between the print head assembly and the rails, and the print head is moved along the rails by belts and pulleys connected to stepper motors.

The lubrication needs of 3D printers may vary based on the components used, their operating conditions, and how frequently they are used. Printers with self-lubricating bearings are a bit less selective when it comes to lubricants. Those with heated beds will need lubricants with better heat stability. Lubricants for 3D printers would also need to have good consistency, as graded by the National Lubricant Grease Institute (NLGI), to remain intact when carrying heavy loads.

To help you select a good lubricant for your 3D printer, here are a few considerations: 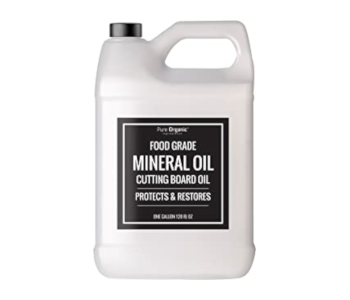 Both oil or grease are acceptable forms of lubrication and can be made of essentially the same components. The simplest way of distinguishing between the two is to think of grease as a thicker version of oil. This makes grease a little more difficult to apply than oil. If done wrong, you can easily end up with a lot of mess when trying to use grease.

Applying an appropriately thin film of oil is easier. The “lightness” of oil is great for allowing smooth movement. However, oil may not have enough mechanical robustness to stay intact under heavy loads. This is an area where a grease-based lubricant performs exceptionally well.

When choosing a lubricant for a 3D printer, you want a balance between the two – a lubricant that is robust enough to withstand constant and repeated movement of a heavy load but is also light enough to create a thin film for smooth movement.

When exposed to high temperatures, an unsuitable lubricant may experience any of three things – a breakdown of its chemical structure, oxidation as accelerated by heat, and a loss of mechanical stability. Any of these phenomena can drastically reduce the effectivity of a lubricant.

While lubricants are naturally heat-resistant, they are also exposed to exceptionally high temperatures when used in 3D printers. Thus, the choice of lubricants for a 3D printer needs to take into careful consideration the temperature ranges at which the lubricant remains stable. 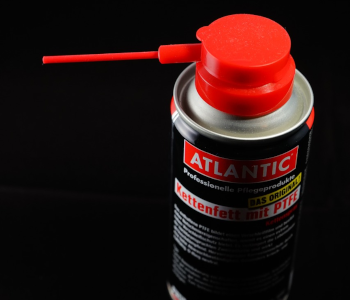 Anyone who has a workshop or a toolbox at home probably has a can of WD-40 lying around. While it can be very tempting to reach for WD-40 when you need a quick lubricant for your 3D printer, it’s actually one of the worst things you can do.

One thing you need to know about WD-40 is that it was never designed to be a lubricant. Instead, it’s a product that is meant to provide rust removal and protection. When left on metal parts for extended periods, WD-40 tends to react with the metal and ruin it permanently.

The message here is simple – you’re better off using cheap machine oil than spraying your 3D printer with WD-40.

How often to lubricate

The most obvious sign is a squeaking sound in any of the rods along which the print head moves on. If there is a significant hindrance to movement or heat buildup due to lack of lubrication, then it would be a good idea to stop printing to apply lubricant – even if it means having to start over. A poorly lubricated 3D printer will likely run into quality issues anyway.

If your 3D printer is in a room with a lot of dust, some of those dust particles may end up sticking on the layer of lubricant in the printer. This quickly reduces the effectivity of the lubricant. You will likely have to clean and lubricate your 3D printer if this were the case.

Thankfully, 3D printer lubrication is not a complicated process. Start by wiping all the rods and bearings with a dry, clean cloth. You need to remove all of the old lubricant, as well as all the dust which have likely been entrained in it. Paper towels with some rubbing alcohol would also be a great way to thoroughly clean your machine from the old lubricant.

Once everything is clean, apply the lubricant in small dabs along the length of each rod. A single dab of lubricant every 5 inches should do just fine. With a rubber glove, rub the lubricant along the rod to distribute it along a thin film. Don’t use your bare hands, as additives in the lubricant may not be safe for contact with skin.

After the lubricant has been applied evenly, you will need to jog the print head assembly along each of the rods. You can do this manually or via the motor controls of your 3D printer. Make sure to have the print head move along the entire length of the rod while watching out for signs of excessive friction.

If you’re satisfied with the smoothness of the movement of the print head, then you’re just about done. At this point, the lubricant must be spread in such a thin layer that it’s barely visible. Excess lubricant is also bad, so you can just wipe them away with some paper towels. Test the motion of the print head again if you had to resort to removing excess lubricant.

A lot of lubricants for 3D printers have been developed through the years, some a lot fancier than the others. We prefer sticking with the more old-fashioned ones as they are easier to find. 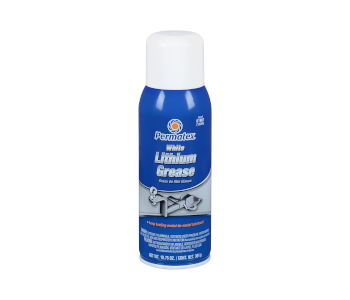 Also known as white lithium grease, this is a very common lubricant for metal-to-metal or metal-to-plastic parts. Made from a combination of lithium soap and oil, the extra viscosity provided by lithium grease makes it more robust for high-load applications such as in garage doors, exercise equipment, or the tracks for adjustable car seats.

As mentioned, the application of thick grease can be a little more challenging than oil. You also need to make sure to buy lithium grease that is compatible for high-temperature applications, such as this White Lithium Grease from Permatex. 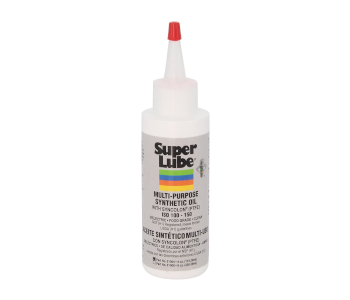 In terms of chemistry, there is very little difference between lithium grease and PTFE oil. In both cases, PTFE (more commonly known as Teflon) acts as the agent for reducing surface friction between moving parts. PTFE oil is suitable for both metal-to-metal and metal-to-plastic applications.

By far, the most popular brand of PTFE-based lubricants is Super Lube. This typical PTFE oil has a synthetic oil base and is marketed as “high viscosity” because of how well it adheres to the surface it is applied to. It is a little thicker than standard oil and manages to hit the sweet spot of superior lubrication and staying power. This PTFE oil is probably the most foolproof option in this list.

Silicone lubricant is typically used in the belts of treadmills as they are particularly suited for metal-to-plastic applications, as well as for contact with rubber and other plastics. Popular brand Super Lube also sells a silicone lubricant oil.

There’s one thing to watch out of when using a silicone-based lubricant – it is not fit to use on metal-to-metal parts. Take a careful look at how your 3D printer is built before using silicone oil.

A lubricant with graphite powder is probably the most expensive one you can get on this list. The presence of graphite gives this lubricant the ability to repel dirt and dust, as well helps keep it rigidly intact to most substrates. In terms of staying power, a graphite lubricant is superior to most other lubricants.

Instead of an oil vehicle, a graphite lubricant typically has a volatile solvent that evaporates after application. This leaves a thin layer of “dry” graphite. This graphite layer is very strong, retains a small amount of conductivity, and looks like a black primer when it dries out.

Graphite lubricant is best for metal-to-metal applications. Although it is used for industrial belts and conveyors, the graphite particles may prove to be too abrasive for the plastic bearings found in most 3D printers.

As with any machine that has moving parts, friction is a huge enemy for 3D printers. As the print head moves along the horizontal and vertical rails, contact between the bearings and the rods will naturally generate friction. Over time, excessive friction will wear down the hardware. The generation of excessive heat due to friction also means that the stepper motors are drawing more power than necessary. Moreover, unchecked friction may have effects on product quality.

The good news is that it only takes the regular application of lubricant to reduce this friction. As long as you know which lubricant to use and how to apply it properly, then you should not have any problems with your 3D printer’s moving parts.

Joseph Flynt
I love diving into the latest and greatest in emerging technologies and seeing what they can do. I enjoy running when I'm not thinking about tech.
2 comments
Share now:
27 Shares
YOU MAY ALSO LIKE
SEE MORE