3D Printers That Use Recycled Plastic

by Ramon
Posted on August 27, 2013
16 Shares
3D Insider is ad supported and earns money from clicks, commissions from sales, and other ways.

Yes, the 3d printer is cool, and it can print anything you want, whenever, wherever… But you still have to fill ’em with €25 plastic spools. If it were only a little cheaper to use them… Or is it?

Well, now you can! Researchers at Michigan Technological University have created a 3d extruder, called Filabot, that turns old plastic that you were going to recycle anyway (of course you were) into usable filament for 3d printing. The Filabot takes 4-inch pieces of used plastic and shreds it before melting it down and extruding it through changeable nozzles. The machine works with thermoplastics like ABS, HDPE, LDPE, but it doesn’t use PVC because of toxicity reasons. The University researchers calculated that the machine would only need a fraction of the energy to recycle the plastic to produce the filament. 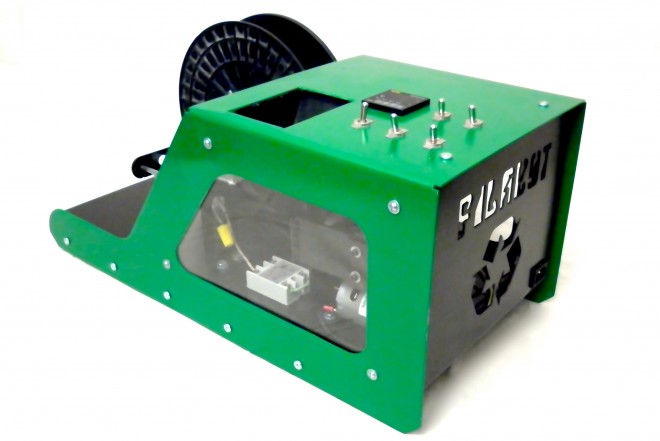 While 20 empty milk jugs can already provide about a kilogram of plastic, this kind of recycling could seriously drop down the price of using a 3d printer. Normally that would have set you back at least €25 – €40. You can save money from not having to buy new plastic but indirectly you’re also saving money because those empty jugs don’t have to be processed by a recycling-plant. Imagine in the near future where all people are printing all the objects they need, exactly how they want it and for pennies on the dollar. This could really be a turning-point for recycling polymeres. “Yeah but I can’t design stuff”. -I know, me neither; but you can always download a design at Thingiverse.com.

But, the researchers say, not every plastic is suitable for 3d printing. For re-using milk jugs, which are made out of high-density polyethylene (HDPE) it’s a little bit more challenging. But the disadvantages are not overwhelming. The University group made their own climate-controlled chamber, integrated with a dorm-room refrigerator and an off-the-shelf teddy-bear humidifier and achieved good results. “3d printing is were the computer is in the ’70’s. The results will get much better.”

It is clear that these types of 3d extruders, where recycled plastic is used, could be a serious answer to global pollution. If consumers can recycle their old plastics at home, ‘garbage’ gets a whole new perspective. But, only time will tell as there are so many factors to be taken into consideration. With good hope, we look forward to the next breaktrough.