How 3D Printing is Changing Chocolate

by Joseph Flynt
Posted on February 4, 2017
40 Shares
3D Insider is ad supported and earns money from clicks, commissions from sales, and other ways.

Chocolate is awesome. 3D printing is awesome. Put the two together, and you have a sure hit on your hands. Chocolate has long been viewed as an essential component of dessert toppings. Since the beginning, the focus has been not just on putting chocolate on top of confectionary items, but adding it in the form of intricate designs and shapes that make the entire dish look more stylish and attractive.

Before the advent of 3D printing, the task of creating chocolate shapes used to be performed by hand. Pastry makers would often spend hours at a time on a single piece of chocolate topping. There was no room for error or second tries, since the entire design was in danger of collapsing at any moment if subjected to too much force. Because of such conditions, chocolate toppings were rare, expensive, and limited in terms of how intricate the design could be.

3D printing enthusiasts noticed these problems and decided to improve the chocolate-making process by handing the job over to the 3D printer. One of the earliest players in this movement was the UK based Choc Edge. The company, which began in 2012, conducted extensive research on the process needed to turn molten chocolate into elaborate designs that tasted exactly like regular chocolate. The only problem was that this device was more of a 2D plotter than a model builder. This meant that the designs you could create on Choc Edge could be no more than a few millimeters thick. The prints that came out, no matter how elaborately styled and beautiful to look at, were essentially 2D paintings rather than 3D structures.

Over the years, more innovations were brought into the field of chocolate 3D printing. Hershey’s Chocolate came up with the Cocojet a few years ago, a 3D printer that prints chocolate models instead of plastic ones. The company claimed that it is the most sophisticated chocolate 3D printer on the market, capable of creating portraits, helixes, figurines, and anything else the mind can conjure up. 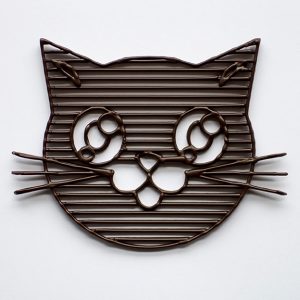 Modern 3D printers allow customers to choose from a library of uniquely delicious chocolate structures. Users can also create original designs out of chocolate -uploading the design into the printer library, in much the same way that original plastic models are created on regular 3D printers. This means users can even create a miniature model of themselves out of chocolate, show the model to their friends, say “Eat me!”, and then laugh at their own wit.

The main development that led to 3D printed chocolate was when researchers swapped out the plastic extruders found on regular printers with extruders that carried chocolate paste with varying degrees of viscosity, depending on the type of chocolate to be made. To get to that point, first the universal paste extruder was conceived by Richard Horne. This innovation allowed for the possibility of looking beyond plastic powered printers to printers that could use any type of paste material, from silicon, to gels, and of course, chocolate. 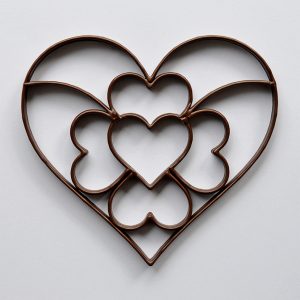 Since then, many more open-source projects have been created that allow participants to print their own chocolate designs from any part of the world. One of the most noteworthy in this regard is the Zmorph, in which the 3D printer comes with multiple heads, each designed for a specific design purpose. This allows the printer to carry out milling, scanning, and other processes to create even more sophisticated designs.

All these companies and their counterparts across the globe are now focussed on expanding the limits of the current 3D chocolate printing technology. There are many varieties of chocolate, from dark, white, granular to paste, and not all of them can be used in conjunction with a 3D printer yet. The printers also have to budget for the temperature of the chocolate. If it’s too hot, it might melt as soon as it is extruded onto a surface. Too cold, and it becomes difficult to create a design and instead, the chocolate comes out a lumpy mass. As you can see, 3D printing chocolate is a much harder problem than you originally anticipated.

Researchers are also working on making the printer itself more compact. As of now, a regular chocolate printer is roughly double the size of an oven. It needs to become smaller before it can be introduced to households. For now, 3D chocolate printers remain the domain of high-end restaurants.

A Future of Printed Chocolate

As with any other innovation the question now is, where does the technology go from here? The answer seems to be to the nearest supermarket. After all, it is not practical to expect every person who wants to eat 3D chocolate to invest money in buying the printer. Neither do all the customers have the skills to create their own chocolate structures. That is why every company that’s involved in the 3D chocolate field wants to find a way to mass produce 3D chocolate structures at affordable rates for direct consumption. A Dutch company called byFlow has taken the first steps in this direction, by creating chocolate 3D printed decorations for cakes and selling them in markets across the Netherlands.

Another way in which 3D printing is impacting the chocolate industry is that established choco-manufacturers are also beginning to embrace the technology, recognizing how it can help them cut costs and deliver better results to customers than what hand-made chocolate can provide. The idea is to avoid making 3D chocolate printers look like threats to chocolate makers, who might fear becoming obsolete if the world takes to the technology too fully. Instead, chocolate makers need to be made to look at the printers as a powerful tool in their arsenal for creating better and more intricately designed chocolate than ever before.

Companies are also working hard to raise awareness of 3D chocolate printing in the minds of the public. The technology is still in its nascent stage, and for the most part had stuck to trade shows until recently. While professional pastry makers are aware of 3D chocolate and the various advantages it offers over traditional chocolate-making methods, the ultimate dream is to make 3D chocolate printers as common a part of households as ovens or cake-makers, so that chocolate enthusiasts can have the opportunity to create their own unique chocolate dishes in the comfort of their homes.

Images courtesy of ChocEdge and 3DPrint.com

Joseph Flynt
I love diving into the latest and greatest in emerging technologies and seeing what they can do. I enjoy running when I'm not thinking about tech.
1 comment
Share now:
40 Shares
YOU MAY ALSO LIKE
SEE MORE