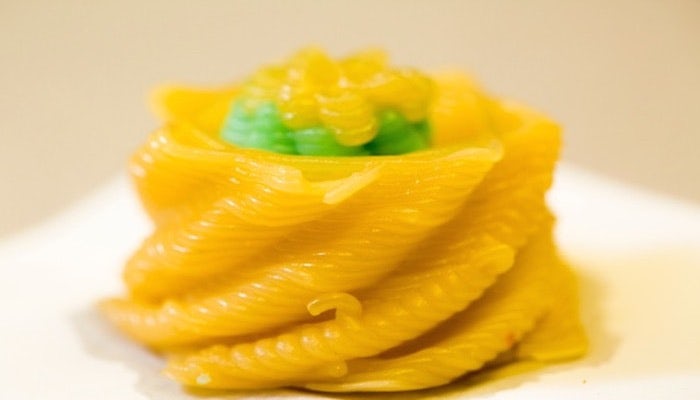 How 3D Printing Will Revolutionize Food

by Joseph Flynt
Posted on June 24, 2017
14 Shares
3D Insider is ad supported and earns money from clicks, commissions from sales, and other ways.

Many people still scoff at the idea of a 3D printer that can create entire meals with the push of a button. Cooking is still considered the domain of the experienced human chef, with dexterous hands capable of cutting, grinding, sprinkling, sautéing, pureeing and carrying out all the other actions that go into making a fully cooked meal.

What these skeptics seem to forget is that the vast majority of food companies already make use of complex machinery to create packaged food products, from tortillas to biscuits. Therefore, the ability to make a machine cook a food item already exists. The question is, can that ability be mimicked by 3D printers in your kitchen?

The answer, as it turns out, is a resounding yes! The reason why people have a hard time imagining machines cooking food is because they associate the act of cooking with what goes on in the kitchen at home everyday. The movements of a cook while preparing food with two hands would be difficult to replicate by a machine. But when machines are tasked with the same job of cooking food they employ a completely different set of movements that work even better.

The food created by 3D printers differs in its execution as well its appearance. The basic model of creation by the printer is the same that is used by printers to create plastic 3D models. In place of plastic filament, a range of tubes containing food paste of different varieties are connected to the extruder. Once the machine starts, the extruder moves in complex circles and lines while laying out the paste in the desired shape layer by layer. The end product has a different texture and feel to hand-cooked food, but it tastes exactly the same as the traditionally cooked stuff.

Where 3D printed food wins out over hand-cooked food is in terms of presentation, because the machine is able to create far more accurate designs on a much more complex level. Cooking by hand is often a dice throw. If you have an experienced chef, the dish might come out looking like something out of a cooking magazine. On the other hand, less-experienced chefs (which most people are by definition) are usually only able to make two or three dishes in a decent manner. Trying new or exotic recipes often ends up in a runny mess.

Ironically, chefs in high-end restaurants are among the first to try 3D printing to get an edge in presentation over their competitors.

3D printed food creates the dish’s shape and contours with a machine’s natural efficiency and accuracy. No matter how many times you print out a dish, it will always come out looking picture perfect. Another point where 3D food wins is also many people’s favorite feature of the new technology: the fact that it makes cooking much less time consuming. The last significant revolution in the world of cooking was the microwave. The reason it gained instant and widespread popularity was because it helped cut down the amount of time spent in the kitchen heating food. Now imagine a 3D printer that reduces the act of cooking a dish to pushing a button, so that all the work of preparing the dish is taken care of by the printer!

What’s brought about renewed interest in the 3D food printer is the fact that it is finally becoming commercially viable. In the past, even more than the printer, it was the tubes of food paste that were posing a problem for wide-scale acceptance of the technology. Unlike plastic filament, food paste has an expiry date unless it is stuffed with preservatives which effects the taste. Recently, companies have hit upon the idea of simply allowing customers to create fresh food paste at home to be fed to the printer and prepare the specific dish you want made.

While this solution sidesteps the issue of food paste getting spoiled before use, it poses a larger question. If people have to create the food paste at home, why not just make the whole dish on their own? This is the main question that needs to be answered by 3D food printer companies before the technology can experience popularity at the level of the microwave. Another point of concern is that current printers can only be used to create the raw dish, which then needs to be manually cooked before it can be eaten.

While there is a new innovation in the field that promises to allow the dish to be automatically cooked using a infrared heating system, we will have to wait and see how soon the technology comes to fruition. For now, 3D printed food technology will continue to be viewed as the one of the next great innovations in 3D printing.