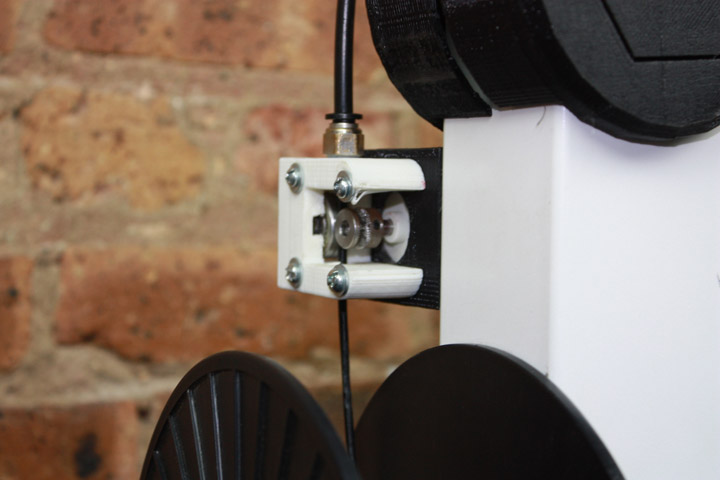 by Joseph Flynt
Posted on March 22, 2017
8 Shares
3D Insider is ad supported and earns money from clicks, commissions from sales, and other ways.

3D printing is often seen as a mysterious, almost magical process by the outside world, where a simple press of a button allows you to conjure intricate shapes out of thin air. Of course, the reality is there is no magic responsible for the printer’s performance, simply sophisticated technology, and some well-designed mechanical and electrical components. Let’s take a closer look at one of the most important components of 3D printers, which is the extruder.

The extruder is responsible for sending filament to the hot end of the printer to be melted and extruded into thin layers that create the final 3D part. The extruder is sometimes referred to as the ‘cold end’ to differentiate it from the ‘hot end’, since the two are sometimes mistaken for each other.

The Bowden and the Direct are the two most popular types of extruders available today. Most desktop 3D printers make use of NEMA 17 Stepper motors. These type of motors can be geared, have different ratings for current, voltage and come in a variety of lengths. Based on the specifications of a particular NEMA motor, it can produce varying amounts of torque according to the setup of the extruder assembly and printer.

There is a part of the extruder which is responsible for extruding the filament through the hot end. This work is either done by hobbed gears, where the splines or teeth have been cut into it, or by hobbed bolt gears. In both cases, the gears are mounted on the motor shaft, where the bolts are driven by geared extruded motors. The work of holding the filament against the drive gear is done by the idler mechanism. Many materials are used to create the idler, from bearings, PTFF tubing, printed plastic to rubber wheels. In order for the idle to work properly a certain amount of pressure needs to be applied against the filament on the drive gear. Changes to the degree of pressure can lead to problems with the extrusion action.

Differentiating between Direct and Bowden

There is no clear cut answer to which extruder is better. Both types have their own strengths and weaknesses. The Direct extruder allows for a shorter distance between the drive mechanism and the hot end. This means extruding and retracting movement can be carried out more easily. Less torque is required for the action than in a Bowden extruder. This in turn leads to cleaner prints, which means less stringing, oozing or messing of the surface finish. A Direct extruder can make use of a smaller motor with a lower current setting to do its job. In addition, the shorter distance means that printing using flexible materials becomes easier.

On the other hand, the Direct extruder moves along with the hot end, since it is directly attached to it. More mass needs to be moved around, which raises the possibility of backlash or frame wobbling. The printer also faces problems because of this. The printer needs to make calculations based on acceleration, deceleration and changes in direction. Some printers don’t take the weight of the hot end into account, how stiff the frame is, or how tight the belts are. This raises the likelihood of the printer experiencing overshooting or backlash. More direct current is required to move the large mass, which means more heat is generated by your motors and drivers.

All things considered, the Bowden allows for more accurate printing. But using a Bowden means there is a greater chance of stringing or oozing. The greater distance the material needs to cover increases the hysteresis of the system. While this can be adjusted by making adjustments to the firmware, it is a definite problem if you are not well-versed in configuring the setting to budget for the lag. More friction is produced by the filament since it travels further on its journey to the hot end. Printing flexible materials can become a hassle in such a situation.

While flexible filaments can be printed using either of the extruders, Direct extruders are the more popular choice for printing them. The reason behind this preference have been explained above, but in the end, both extruders have the capability to work with flexible filaments, since both follow a constrained path for the gear pinch point to the hot end.

In conclusion, there really is no one type of extruder which can be said to be qualitatively better than the other. The quality of the printing depends on many factors other than the extruder. The type of printer you use, the software it carries, the quality of the raw print material, and the speed with which you want to carry out the printing are all important factors. A general rule of thumb to follow is that the Direct extruder gives better results when the speed of printing is slow.

There are many extruder-hot-end combinations on the market today that you can choose from. The PTFF Hot Ends is cheap and works quietly. It has a large melting area, and so works faster, with easy to change nozzles. On the other hand, it has a pretty old design and can be hard to find. The Lulzbot Hexagon Hot End with TAZ extruder can handle high temperature materials. It has an all-metal design, and the short hot end allows for tall prints. But it needs cooling fans to prevent the extruder body from melting and jamming the printer. The E3D V6 can also handle high temperature and has a metal design and easy-to-change nozzles. Again, active cooling fans are required for this model. The flexion extruder retrofitkit can handle a diverse array of printers and prints at a much faster rate compared to stock extruders. It has a self-cleaning mechanism and a high-pressure discharge nozzle for easy printing with flexible filaments.