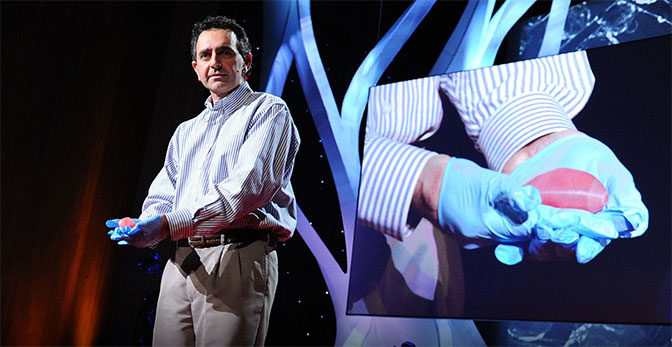 by Ramon
Posted on April 19, 2014
11 Shares
3D Insider is ad supported and earns money from clicks, commissions from sales, and other ways.

Since the invention of the 3d printer in 1984, its disruption to the manufacturing process became inevitable as more companies started to come up with their own 3d printers.  For years the design has been improved. Now, many sectors are bearing its fruits, such as in industrial designs, consumer applications and even the automotive industry. However, the greatest benefits mankind might be receiving from 3d printing is when scientists and engineers started thinking: “what if we extend the potentials being offered by 3d printers to medical innovations? Like 3d printing organs?”

“Today, nearly 100,000 people are on waiting lists for organ transplants in the United States, but about a dozen of them die each day because of a lack of organs”

According to the Hastings Bioethics Research Center, it is imperative that the number of organs available for transplant goes up. People are in dire need of body organs either as part of their long-term medical treatment or in an emergency situation.  Physicians and researchers are finding unique ways to make 3d printed organs work for patients.  Initial results like a printed and implanted skull or airways show that this can be the hope of patients around the world.

Before the 3d printer made its entrance to the medical field, artificial organs had to be grown around a hand-made mold, making it very difficult to achieve the desired shape. Now, scientists are able to precisely print any shape they want, in a fraction of the time (read: money) required beforehand. Read these amazing stories about 3d printing organs saved these persons’ lives.

Early this year, a 22-year old woman from The Netherlands underwent a 3d printed skull transplantation. This was the first of its kind. She was suffering from a condition that made her skull bone thicken over time. Normally, that bone would be about an inch thick, hers was almost four times that. She was suffering from loss of vision, headaches and impaired sense of direction. Surgery was inevitable.

A specialized company from Australia, whose name is not disclosed, printed a polymere skull that was implanted during a 23-hour surgery. Brain surgeon dr. Bon Verweij, who lead the operation, announced the woman had fully recovered. She was already able to start working again, without any discomforts. “By her looks, you couldn’t tell she had an operation either”, Verweij said.

Another miraculous story tells about 6 weeks old Kaiba Gionfriddo, a boy from Ohio that had to receive an artificial airway in order to survive. Due to an obstruction in the boy’s windpipe, he was rushed to the hospital where he was able to breath steady. At home he would have no chance of surviving, since he could be in need of CPR at any given time. Again, doctors were facing a dilemma.

Using an experimental technique, the toddler’s own stem cells were used to 3d print an artificial windpipe. First, they made a CT-scan of the boy’s lungs, The model was fed into a 3-D printer that can engineer structures using a powder called polycaprolactone, or PCL. A shape was created for the stem cells to grow on. Within a day the organ (think of it more like a scaffold) had completed growing. When it was being stitched closed, the lungs starting infating themselves. There were cheers in the operating room. The printed windpipe will degrade over time, giving the boy’s body the ability to strengthen the organ itself. No further surgery is needed.

Accidents and sickness will never be eradicated.  Diseases and conditions that cause the need for a transplant or surgery will always be here. But at the very least, in the near future 3d printed organs will revolutionize healthcare.  Patients will be given a second lease on life once this technology becomes more readily available and proven. Progress in implanting artificial body parts can prolong someone’s life, and improve the quality of it. It’s of great importance that this method becomes cheap enough so that everybody in need can benefit from it.