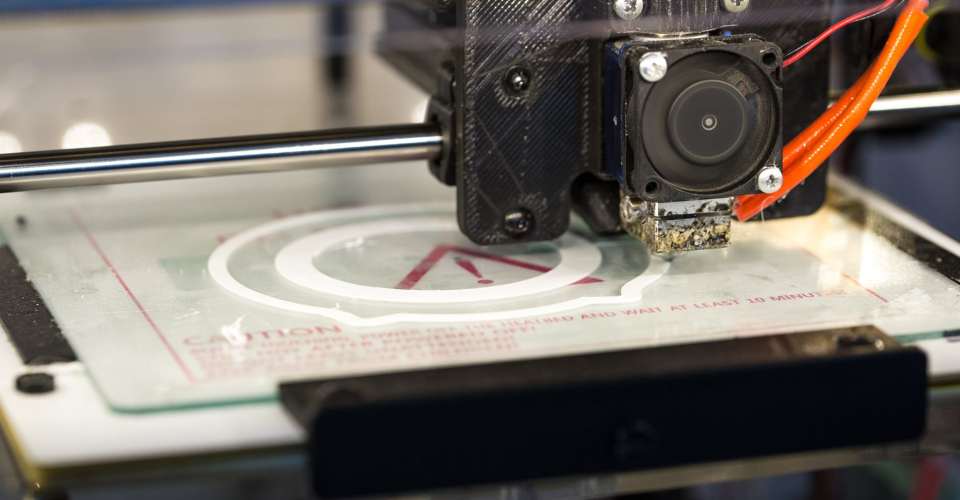 Dealing with Overhangs in 3D Printing

by Joseph Flynt
Posted on June 9, 2019
13 Shares
3D Insider is ad supported and earns money from clicks, commissions from sales, and other ways.

One of the often-cited reasons for the popularity of 3D printing is that it’s capable of printing any kind of object and design. While this statement is technically true, some designs are inherently more challenging than others. A fine example of this is printing a design with a prominent overhang.

What is an overhand, and why is it so challenging? Is it something 3D printing professional should just avoid altogether? What are the best ways to succeed in printing a design with an overhang?

What is an overhang?

To better understand why an overhang is challenging, we need to go back to the basics of 3D printing using Fused Deposition Modelling (FDM) technology. In this process, the melted filament material exits the extruder nozzle and is deposited on a surface. AT this point, the filament starts to cool down, solidifying the later while fusing with the layer directly below it at the same time.

Based on this series of steps, FDM printing relies on each layer being printed on another layer directly below it. Small amounts of filament without any direct support are fine, as the filament starts to cool down and solidify the moment it exits the hot end nozzle.

However, large features without any support underneath them tend to collapse under their own weight. This is an overhang – a design feature that extends far beyond the layer underneath it, leaving it without any direct support. The feature does not need to completely collapse to be considered a failure. In minor cases, the overhanging feature can end up sagging or merely delaminated. In any case, these features don’t look good and are structurally weak.

Is an overhang a problem?

Overhangs can certainly be challenging, but they are not problems that cannot be solved. In many cases, they also cannot be avoided. For many 3D printing professionals, overhangs are simply a necessary evil and one they have to work around.

As we’ve mentioned, the melted filament material starts to cool down and solidify the moment it exits the hot end nozzle. This means that it can somehow support itself if it’s even partially supported by the layer underneath. As a rule of thumb, an overhang that extends at a 45-degree angle does not require any special measure to hold. At this angle, each layer is still 50% supported by the previous layer.

Many designers try to stick to this 45-degree rule to simplify the printing process. However, this can prove severely limiting, especially for designers who want to come up with unique and creative 3D prints. By learning how to print with overhangs, designers and 3D printing professionals can expire their horizons and work beyond what is considered a basic 3D printing challenge.

How to not have problems with printing with an overhang

There are a lot of ways that you can work around a design with an overhang. Which one works best for you depends on your level of patience, craftsmanship, or how much filament you’re willing to allow to go to waste.

Sometimes, the best way to print with overhangs is to avoid them altogether or minimize them by reorienting your model. Slicer software are pretty smart about this and can usually detect overhangs that exceed the 45-degree rule. By playing around with your model’s orientation, you might be able to have as few overhanging features as possible. You’ll likely still have to print with supports, but at least you’re going to need less of them.

If your design has long, continuous features that are overhanging, it’s sometimes better to print them in separate pieces. Keep in mind that the less overhanging features you have, the less likely that your print will fail spectacularly. This will only work if you have flat and simple overhanging features, otherwise printing them separately won’t be much help. Splitting the model may not always be a viable option, as some designs (especially those you downloaded from free design websites) don’t allow any edits to be made outside of scaling.

A downside of this method is that you’ll end up with more post-processing work. You’ll have to glue the separate pieces together and smoothen the surface to hide the split. How well you can pull this off depends on your level of crafting skill.

Modifying your design to integrate chamfers feels like cheating, as it merely avoids the overhang problem rather than solve it. A chamfer ensures that the 45-degree rule is followed by forcing all angled features to be within 45 degrees. As you can imagine, this can drastically change how a design looks. This may not be agreeable to the original intention of the design, so a chamfer is not always a good solution.

The most foolproof solution to overhanging features, a series of columnar supports can be printed under overhangs to support their weight. Slicer software can automatically do this for you, and different software platforms have different ways of implementing them. These supports will then have to be removed from your print when it’s completed.

Removing the supports takes a bit of additional work, especially if they are made from the same filament material as the rest of your print. There’s also the risk that your print itself will get damaged during post-processing. Fortunately, certain filaments are meant to be used as supports.

Polyvinyl Alcohol (PVA) is one of the best support filaments as it dissolves in water. Removing PVA supports after printing is as simple as submerging the print in water for several hours. High Impact Polystyrene (HIPS) is another example, although it requires a limonene solvent for dissolution. However, printing with soluble filaments is only possible if you have a dual extrusion setup.

A drawback of using supports for overhanging features is that you inevitably end up using more filament material than what the design calls for. This is fine for a few prints but making multiple prints with supports can get expensive pretty quickly. Printing lots of supports will also add several hours of printing time. If these are relevant issues for you, then you can try reorienting your model so that you’ll need as few supports as possible.

When you’ve exhausted all the exotic solutions to overhangs, then maybe it’s time to tweak your printer settings to avoid overhang-related failures. When making adjustments, keep in mind that your goal is for each layer to cool and harden as quickly as possible. A harder layer can better support itself. However, keep in mind that a layer that cools too rapidly can lead to layer adhesion problems. This means there’s a sweet spot you should be aiming for.

Reducing the printing speed, or the rate at which the extruder conveys the filament, you are giving the filament just enough time to cool down before it hits the build platform. Hopefully, this longer cooling time is enough to strengthen the layers of the overhanging features.

Keep in mind that you also need to reduce the hot end temperature when reducing printing speed, as the filament ends up with longer exposure time to the hot end. Not doing so can lead to other problems such as stringing or a clogged nozzle.

Each filament type has a range of printing temperatures. If you’re having overhang problems, then you can try printing at the lowest possible temperature setting. This should make the filament material just soft enough for layer adhesion but not too hot that it cannot support its own weight.

You can also try reducing the layer width of your print, at least for the overhanging features. By reducing the layer width, you also reduce the weight of each successive layer. This makes it less likely for a layer to collapse due to its weight. The low mass of filament material deposited per layer also helps each layer cool down faster. The downside of this is that you can end up with a much longer printing time.

4. Use a cooling fan

When it comes to strengthening your layers, cooling is your friend. When your print reaches the part where there are overhang features, you can start using a cooling fan at maximum speed. This step can work on the other measures we’ve mentioned above, such as reducing printing speed and layer width.

Hitting just the right spot in terms of printer settings can take a lot of trial and error. This also means that you could end up with a lot of wasted filament. To keep the amount of waste to a minimum, you can print a test object every time you dial in your settings. There are a lot of overhang test designs out there, such as this one from Thingiverse.

Truth be told, overhangs are some of the most challenges that 3D printing professionals face. Each one of the methods to solve the overhang problem we have listed here is viable, and which one you use is up to you. Some people prefer the simplicity of printing designs as separate pieces and are skilled enough to make them look like a single piece after post-processing. Others prefer the reliability and lower post-processing needs of supports. If you have a dual extruder printer, then soluble filaments seem to be the no-brainer option.

If you can’t decide which one works best for you, then we recommend that you try all of them at least once. This exercise could give you a lot of insight into how your filament behaves under different conditions. Mastering overhangs is just a step towards being a true 3D printing expert.