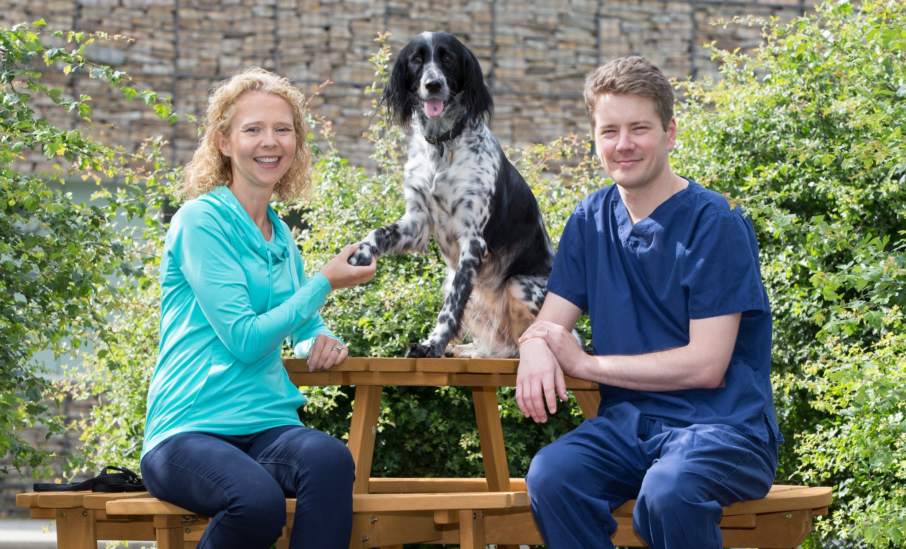 by Joseph Flynt
Posted on June 24, 2017
38 Shares
3D Insider is ad supported and earns money from clicks and other ways.

When we think of 3D printing the first thing that comes to our mind is printing gadgets or toys. We imagine all the possibilities and all the things we can print at home rather than going out to buy them.

Scientists at the University of Glasgow however have other ideas. They are now printing bones to implant them in animals and humans later on. This is also being done by SI-BONE which is a company based in California that has recently received FDA clearance.

Funded by the Find a Better Way foundation, which was founded by Sir Bobby Charlton, the University of Glasgow team started work last year. The idea of printing actual limbs has already become a reality. The first benefactor of this wonderful project is Eva, a 2 year old Munsterlander dog.

Eva almost had her leg amputated until it occurred to her vet to utilize the research being done at the University of Glasgow. Following a car accident Eva’s front leg was broken. Unfortunately, it hasn’t been able to heal due to recurrent bone infections. These infections require the removal of the infected bone tissue ending in a 2cm gap in the bone.

Her vet, William Marshall, had heard about the researchers at the University of Glasgow and their usage of a protein called BMP-2 that encourages bone growth. The research was a few years away from human testing, but why not try it on Eva who could either risk it or have her leg amputated?

The combination of BMP-2, bone chips, Eva’s own bone marrow, and a binding agent was implanted in her leg by William Marshall. This was done for the first time and luckily for Eva she made a full recovery within 7 weeks of the procedure. The degradable biomedical plastic dissolves with time leaving newly grown bone in its place.

Encouraged and delighted by this experiment the team at the University of Glasgow is now more eager to continue their research and now have an actual use of the device to build upon. This technique was started with the goal of helping landmine survivors in Cambodia, but now it’s starting to look like it can be utilized for lots of people. The future looks bright.

Sir Bobby Charlton expressed his delight saying he wasn’t expecting results so soon and that he’s glad that Eva can now live a normal and handicap free life.

Joseph Flynt
I love diving into the latest and greatest in emerging technologies and seeing what they can do. I enjoy running when I'm not thinking about tech.
0 comments
Share now:
38 Shares
YOU MAY ALSO LIKE
SEE MORE