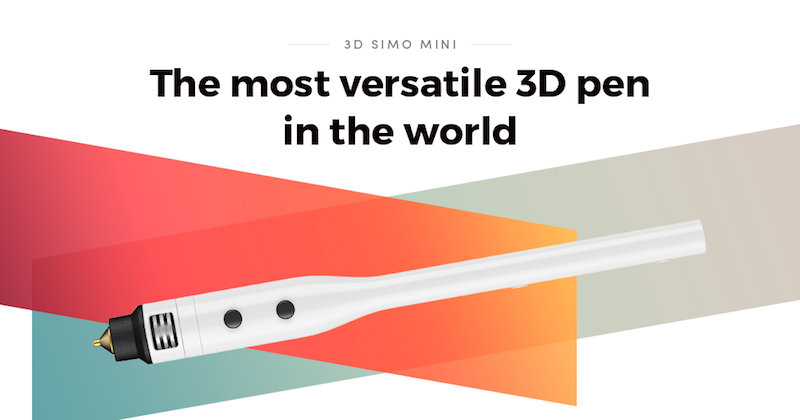 by Joseph Flynt
Posted on June 27, 2018
15 Shares
3D Insider is ad supported and earns money from clicks, commissions from sales, and other ways.

Could this be the most versatile 3D printing pen on the planet right now?

The nearest thing to a 3D pen’s design is a glue gun, but that’s where the similarity ends. 3D pens don’t glue of course, they build by drawing. This new concept allows users to create 3D objects as the heated colored material oozes out the nozzle. It’s an artistic process and one that takes patience and persistence to perfect. This review looks at the 3D Simo Mini 2 that takes 3D pens up to a new level.

The 3D Simo Mini 2 is the most versatile 3D pen around according to the company. This honest review looks at their pen, the claims, and thus cuts through the hype so that you don’t have to.

So why do they call it the most versatile 3D pen in the world? It’s because it’s so much more than a 3D pen. This pocket-sized puppy melts, burns, cuts, and even solders metal.

To power the pen you have two choices. You can plug it in using the long power cable or use a battery pack to make it wireless.

The 3D Simo Mini 2 APP: The iOS and Android APP helps to enhance its multipurpose use still further. App control lets you change temperatures and select different speeds. Users can also create material profiles using the app and print out project templates. Heck, there’s even an option to watch video tutorials if you need a little help.

Don’t worry if you don’t have a smartphone. It’s also easy to control the 3D Simo Mini 2 using the pen’s intuitive buttons and LCD screen.

3D Drawing: How and what you use the 3D Simo Mini 2 to draw is up to you. There are few limits. You can create decorative storage boxes, print insects, animals, and make decorations. There are enough templates to keep you going from beginner to advanced levels.

The wide range of plastic filaments adds to the pen’s versatility and your creativity. You can also print using thermochrome, wood, metal, and a few other materials.

The Creative Burner: Why would you want to deliberately burn, scorch, or cut something made of leather, wood, or foam? Well, it’s an artistic way to produce patterns, create unique logos, make shapes, or add decorative text to an object. There are no limits other than the artist’s inspiration. And the precision foam cutting attachment glides like a hot knife through butter.

The Soldering Iron: It’s no different to using a conventional domestic soldering iron. The soldering attachment creates a permanent bond between parts using a fusible metal alloy or solder.

What’s Not so Good

The 3D Simo Mini 2 is not a toy, and that’s fine if you’re an adult. Do not leave unsupervised kids alone with this 3D pen. The tip gets very hot and can reach temperatures in the neighborhood of 480-degrees. It’s also a good idea to keep a fan on to waft away any unpleasant fumes while using the tool. There’s quite a learning curve too. That’s half the fun for some, but it’s a frustration for others.