AdBlock Plus vs uBlock Origin

by Joseph Flynt
Posted on April 29, 2018
15 Shares
3D Insider is ad supported and earns money from clicks, commissions from sales, and other ways.

Many sites contain ads in an attempt to make their owners money. That’s fair enough as good sites take a lot of time and energy to develop. However, some sites are simply stuffed with ads, which creates a poor user experience. That’s where ad blockers come into play. By installing the right program, you can easily prevent these annoyances.

If you look below, you will see a HuffPost page without ad blockers. You will notice an annoying PayPal ad at the top and a Lexus ad to the right.

The problem is that some ad-blocking software simply does a poor job and can be heavy on your system’s resources. To help you choose which ad blocker to install, we have compared two of the most popular options: AdBlock Plus and uBlock Origin. Both programs will be assessed across a range of categories. If there is a clear overall winner, then we will award a point. A final score will be tallied up at the end, and we will let you know which program is recommended.

Should You be Using Ad Blockers in the First Place?

Of course, it’s up to you. A site that is spammy deserves it. If you visit blogs with small readerships, then you may want to support the owner by switching off your blocking software. You can also create a blacklist of handpicked sites to block ads on, instead of blocking it everywhere by default.

Some ads are forms of malware in disguise. For example, they may invite you to download software that is, in fact, a virus. Enabling ad blockers is always recommended when visiting sites you don’t completely trust.

Keep in mind that some sites automatically detect ad blockers and prevent access if one is currently enabled. For example, Forbes doesn’t allow ad blockers as shown below.

This is pretty common and a problem with almost any ad blocker. There’s a tug-of-war between ad blocking software and major sites.

History of AdBlock Plus

The original version of AdBlock came about in 2002. It was developed by Henrik Sorensen, a Danish university student. The original program hid ads from view. However, it did not prevent them from being downloaded.

Adblock Plus wasn’t released until 2010. It was originally only available for Google Chrome but quickly made its way to other browsers.

uBlock Origin is a lot newer than AdBlock Plus. First released in 2014 as μBlock, its name was quickly changed to uBlock to avoid confusion with the Greek letter “μ.”

To install AdBlock Plus, simply pay a visit to https://adblockplus.org/. The site should automatically detect your browser and supply you with the correct download link. The extension will install automatically (usually within seconds).

When installing uBlock Origin, make sure you steer clear of www.ublock.org. This site is for installing uBlock, not uBlock Origin (which we are discussing today). Both programs have the same logo so it can be a bit confusing. Rather, you will need to visit the extension section for your current browser, find uBlock Origin, and select install. The easiest way to do this is to type “uBlock Origin” into Google, followed by your browser name. Once you locate the browser extension, it should only take seconds to install.

It’s pretty simple to install either program so no overall winner in this category.

AdBlock Plus works on computers as well as Android and iOS devices. The program is currently available for the following browsers:

uBlock Origin is also available for Android and iOS. It’s currently compatible with:

It’s likely that you will notice differences in performance, depending on which browser you are using, and whether that browser is on a PC or mobile device. The current browser version may also affect performance.

If you’re having trouble getting either program to work properly, it’s recommended you either update your current browser or switch to a different one.

AdBlock Plus inches out slightly ahead in this category.

When you visit a site, AdBlock Plus blocks most ads. However, sometimes it will let ads be seen. If you’re wondering why, it’s because certain companies pay for the privilege of having their ads stay visible. These are known as acceptable ads and they must meet specific criteria. However, there is a way to block these acceptable ads and we will show you how in the next section.

uBlock Origin simply blocks every ad that it can.

If you don’t want to worry about whitelist options and simply want a program that blocks all ads, then uBlock Origin cuts the nonsense and does what it’s supposed to do.

On the surface, both programs’ interfaces look fairly similar. There are buttons to toggle ad blocking on and off. For AdBlock Plus this is an “enable/disable” button. uBlock has a similar “start/stop” button, which look like a computer power button. B

Both programs also show how many ads are blocked (both for the current site and since installation) on their main interface. Pretty simple so far. 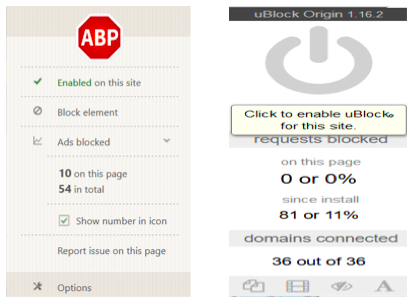 If you access the settings menu on AdBlock Plus, you will find it pretty simple. You have a couple of privacy settings to consider. You can also turn acceptable ads on and off (this is very helpful). Lastly, you can add languages to AdBlock Plus (if you browse websites in languages other than English). 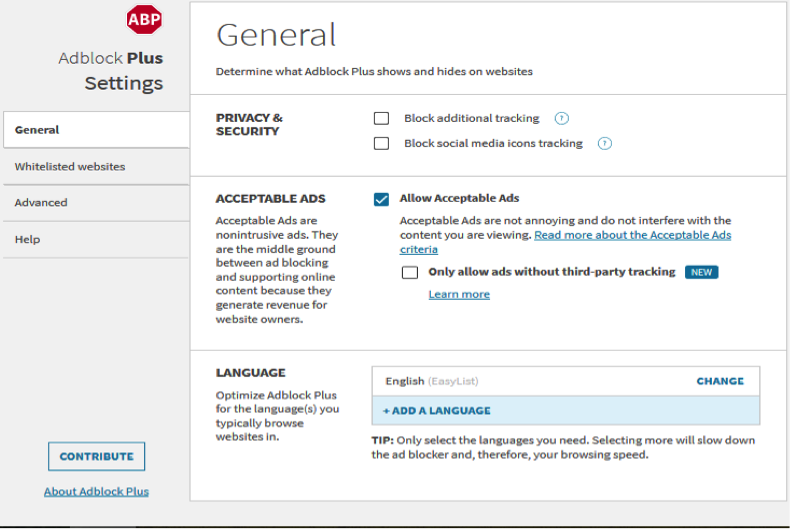 The uBlock Origin settings menu is a bit more complicated. You will have privacy options, a range of setting to modify the functionality of the program, and even a color-blind friendly option. 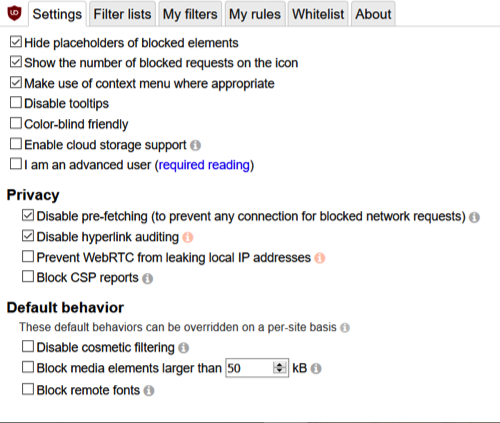 uBlock Origin comes with more built-in ad lists than AdBlock Plus. However, this isn’t a big deal as both programs allow users to import as many third-party lists as they like.

Both programs also allow users to write their own lists. 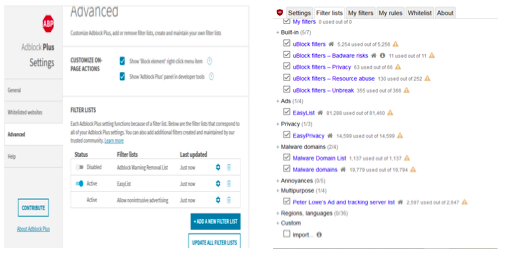 This is another category where it’s hard to determine a clear winner.

Adblock Plus is based on older technology that has a heavier drain on your system resources. This is especially true if you’re blocking ads on a large number of tabs at once. While you may still experience slowdowns using uBlock Origin, these are typically less noticeable.

Most tests determine that uBlock Origin uses less system RAM than AdBlock Plus.

Both ad blockers are completely free to use, as they are open source. However, you do have the option of donating if you like.

The scores are tallied up below.

Which Program is Best?

Overall uBlock Origin is the better option for most users. It’s less heavy on system resources, and it automatically blocks all ads. If you have an older computer, then this program will be the faster option.

If you want to see some ads, then AdBlock Plus is a better choice. You can simply enable the “Allow acceptable ads” option. You will then see ads that have been assessed as being helpful, typically from major companies such as Google and Amazon.

Both programs allow third-party ad filter lists and allow users to write their own lists, so no differences there.

Regardless of which ad blocker you choose, you probably won’t experience much difference. They are both designed to block ads, and that’s what they do.

Both programs are free, so consider giving each one a try. You could run one for a week then switch next week. See which one performs the best and then stick with it.

Joseph Flynt
I love diving into the latest and greatest in emerging technologies and seeing what they can do. I enjoy running when I'm not thinking about tech.
15 comments
Share now:
15 Shares
YOU MAY ALSO LIKE
SEE MORE