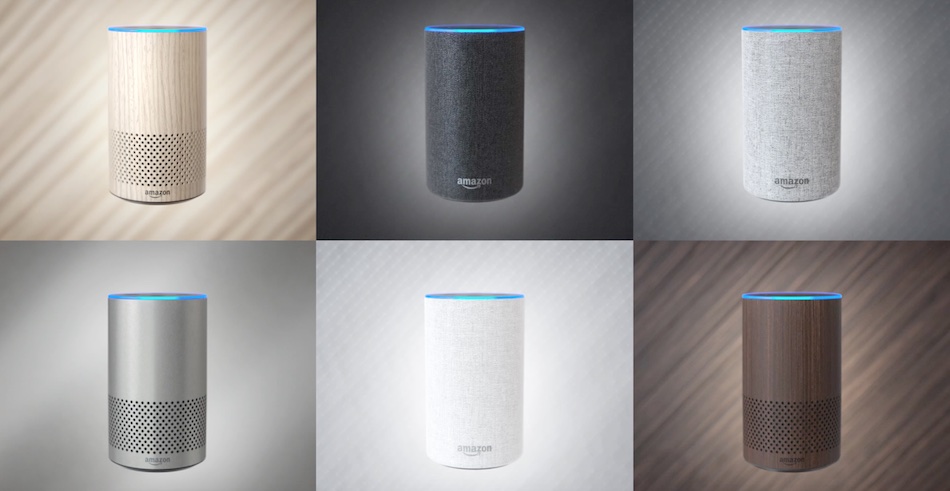 by Joseph Flynt
Posted on November 19, 2018
15 Shares
3D Insider is ad supported and earns money from clicks and other ways.

Amazon has recently released their Black Friday deals for 2018. You can save up to 50% on Echo device during the sale. There’s no confirmation when the sale will end, but it’s likely to continue through Cyber Monday.

The Echo is a brand of smart speakers developed by Amazon and released in 2014 which started the smart speaker rage. Echo speakers are powered by Alexa, which is a smart assistant that can perform tasks around your home simply by asking it. Black Friday is a great time to shop around if you’re looking to add to your smart home system.

Update: You can get a free Amazon Echo Dot when you purchase a Ring Video Doorbell 2. 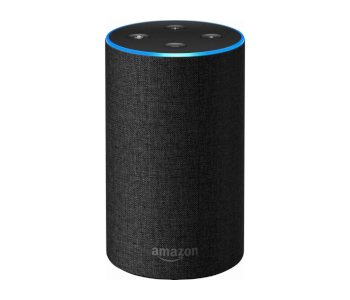 The second-generation Amazon Echo looks the least tech-centered from the entire Echo range. The fabric is wrapped around the whole device, giving it a more stylish and interior design-friendly design rather than the brushed aluminum of the higher-end Echo Plus. This means that it’s easier to match it with your home decor as these devices start to become mainstream.

There are three fabric options to help you match it to your home: Charcoal, Heather, and Sandstone. Apart from the fabric, you also have the option of getting an Echo with a hard plastic shell. These come with three options: Oak, Walnut, and Silver. The shells are interchangeable so if you change the decor in your room you can buy a new shell for your Echo to match.

One of the most unmissable features of the Echo is Amazon’s personal assistant, Alexa. Alexa has greatly improved from the first version and now has improved voice recognition so it can easily understand your commands. You can ask Alexa the basics like weather reports, flash news bulletins, and even have it set timers. You can also ask Alexa to tell a joke or sing, and it does.

It is highly recommended to look in detail at the different skills Alexa has and set up the Echo to work according to your preferences. The most powerful feature of Amazon Echos is the potential to use them to control smart devices like lightbulbs in your home.

The sound quality of the Echo is crisp. Whenever Alexa speaks she can be heard clearly. The Echo also has a seven-mic array, which means it can pick up your commands wherever you are in the room. The speaker in the Echo is great, and it’s a pleasure listening to music with it. The sound is crisp, but the sound quality starts to break a little when you turn up the volume too much. If you want a sound quality upgrade then you might want to check out the Amazon Echo Plus. 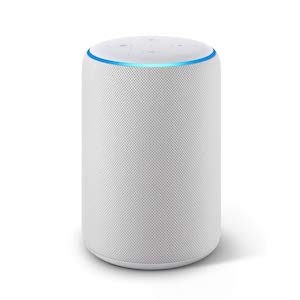 The Amazon Echo Plus looks similar to the Echo. It’s wrapped with a mesh fabric that helps it match your home decor. It also has buttons on top of the device to control the volume, mute the device, or activate Alexa. A ring of LED lights around the rim that lights up when Alexa speaks is one of the most striking differences between the Echo and the Echo Plus.

The Echo Plus also sports a seven-mic array so that it can easily pick up your voice commands. This has been improved over the Echo and it can easily pick out your voice from noisy environments. It has the same smart capabilities to play music and podcasts, connected to other smart devices. It can also tell you about the weather and the news.

One added feature of the Echo Plus is the temperature sensor, which monitors the temperature in the room. This feature is especially useful when you connect your Echo Plus with a smart thermostat so it can automatically turn the heat up when it gets cold.

The Echo Plus boasts the best audio in the Echo range. Its 3.0-inch neodymium subwoofer and its 0.8-inch tweeter allow you to enjoy better sound quality. The Echo Plus also sports a 3.5mm auxiliary port where you can always connect to external speakers.

These features make the Echo Plus much more than a smart speaker but more of a lifestyle product; a control center for your smart home system. 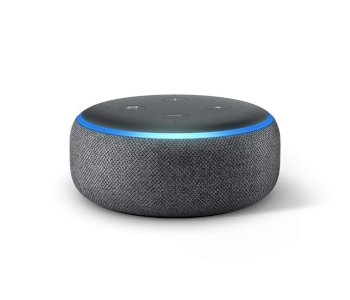 The Amazon Echo Dot is the cheapest Echo speaker you can get. It is significantly smaller than the Echo or the Echo Plus. In fact, it looks like a hockey puck but with rounded edges and a wrapped fabric mesh grille. The Echo Dot also matches the rest of the Echo line with its color range.

The top of the Echo Dot sports the same buttons you’ll find on other Echo devices: two volume buttons, a microphone mute, and Alexa. One of the differences between the Echo Dot is that it only has a four-array microphone to pick up your commands. It may not be the seven-mic array of both the Echo and Echo Plus, but it can still pick up your voice from a good distance.

The Echo Dot also has an auxiliary 3.5mm jack so that you can connect it to any speaker. The only drawback is that the cable is not included out-of-the-box, but finding a matching cable shouldn’t be a problem.

Installing the Echo Dot is similar to the rest of the Echo range, all you need to do is head to the Alexa app on your smartphone and follow the instructions.

This is the new 3rd generation that was just released. It features an improve speaker. You can save $80 when you buy three of them.

As a smart speaker, one of the things to look out for with the Echo Dot is the sound quality. Compared to the previous generations of Echo Dots, it sounds a lot better. Due to its size, it does not have the best speaker in the current Echo range. It does not have a lot of bass sounds and not the type of speaker you want to listen to music a lot.

The Echo Dot is the wireless speaker of choice if you’re looking for one to control your smart home system or make calls. The call quality is great and one of the best smart speakers at this price range. This Black Friday, you can grab the Echo Dot at a 50% discount, making it a great deal. 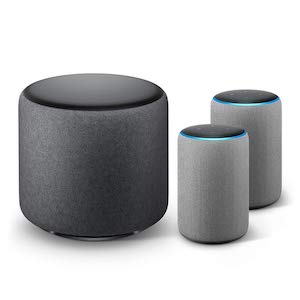 The Amazon Echo Sub is a companion speaker to your Echo line of products. The Echo and the Echo Plus both lack deep bass sounds and if you want to enjoy music with your smart speakers then the Echo Sub is the device for you. It’s not an upgrade for everyone, but if you’re an audiophile and feel that the Echos don’t do a great job, then this is an upgrade for you.

It looks similar to the Echo and the Echo Plus. It has a matte plastic top and a fabric mesh grille around the whole device. It’s not a smart speaker, so there are no volume, mute, and Alexa buttons. The only button that it has is for starting up the setup process. Amazon has designed the setup process to be simple and pair it up with your Echo devices.

The Echo Sub lacks finer audio controls like an equalizer or volume controls. You only get an “Alexa, turn down the bass” voice command.

Overall, if you’re looking for a smart speaker to add to your home, this Black Friday is the best time to get one. These deals will help save you up to 50% on the Echo Dots and 30% on the Echo and the Echo Plus.