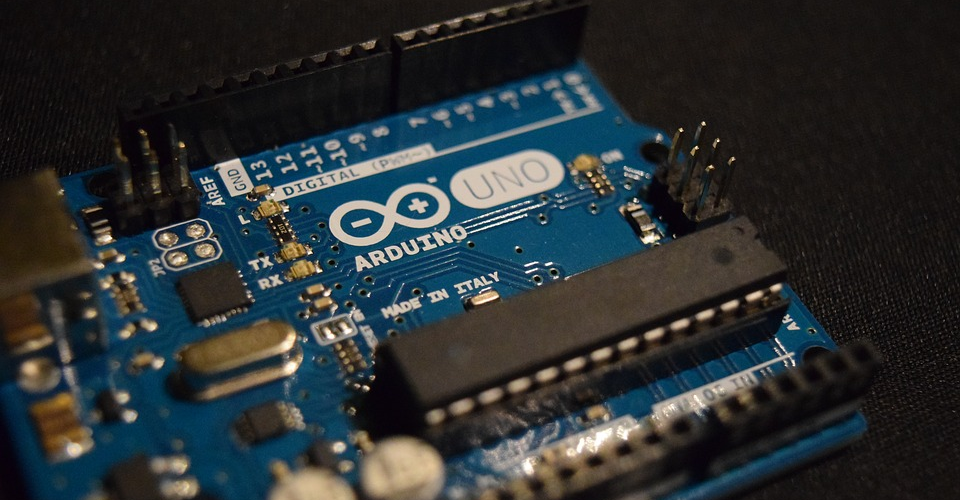 by Joseph Flynt
Posted on July 4, 2019
15 Shares
3D Insider is ad supported and earns money from clicks, commissions from sales, and other ways.

Up until a few years ago, we all thought of robots as the technology of the future. Considering how common robots have become nowadays, it seems that the future has already arrived. Robots have become incredibly essential in several manufacturing industries because they can be automated and can do their jobs tirelessly and extremely accurately.

Even our day-to-day lives are increasingly becoming influenced by robots. This is no small part to open-source and user-friendly robot development kits, such as those manufactured by Arduino. What is Arduino anyway and why is it found in so many consumer-level robot kits? What are the best Arduino robot kits that are available today?

What is Arduino and why is it popular?

Arduino is a hardware and software company that has become well-known for creating open source development kits. Nowadays, the “Arduino” typically refers to a single circuit board design that integrates the microcontroller, all input-output ports, a power connector, communication interfaces, and a few other essential components. Using just this single board, an Arduino-compatible device can capture data from several different sensors and respond by running servo motors or DC motors.

Behind this translation of input to output is the code. Programming an Arduino board is typically done using Arduino’s official integrated development environment (IDE). This IDE is also an open source software and comes with a special environment that was specifically designed to make coding easier. While it’s possible for anyone to start a code from scratch, Arduino has such an extensive community that you could probably find a code for what you need and modify it as necessary.

Due to the unique open-source and highly customizable characteristic of Arduino boards, they have become very popular in the market for preassembled or DIY kits. Arduino boards have also made robotics a much more accessible field. No longer do people need to be concerned about how sensors work or how much torque a motor can output. With Arduino robot kits, all you need to do is to assemble your robot and go straight to programming them.

What to look for in an Arduino robot kit

Picking the best Arduino robot kit needs to take into account several factors. If you’re buying the kit for your kid, you will need to consider how easy the robot it is to get assembled. Do you need to solder parts together? How complicated is the wiring of the components?

Flexibility is another important factor to consider. Most robot kits offer different functions, by way of different sensors and algorithms. While having a lot of built-in features is great, what will make a robot kit really stand out is if it’s compatible with after-market sensors and electronic components, which will allow you to really make the Arduino robot kit your own.

The most recommended Arduino robot kits 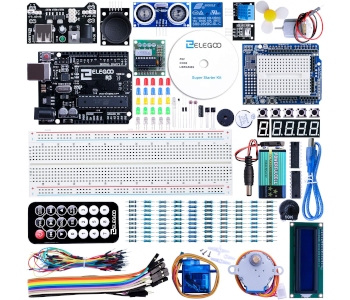 For kids and those who are pure beginners to the world of Arduino programming, then this ELEGOO UNO kit is an extremely accessible and very affordable option. The kit comes with just about everything you need to start your very own Arduino project, including the UNO board, LEDs, resistors, servo and stepper motors, and a breadboard for easy wiring. Since it was designed as a starter kit, it comes with a tutorial composed of 22 guided lessons.

Although the UNO board was developed by ELEGOO, it is 100% compatible with the Arduino coding IDE. The array of sensors that comes with this starter kit is just wide enough to allow for a variety of builds – a potentiometer, photo resistor, and a thermistor.

That being said, the UNO starter kit is quite limited in that you’ll quickly outgrow it as you become more proficient with Arduino. Even kids will be able to get the hang of this kit in a few days and will be ready to move to something more complex. The upside is that the UNO starter kit is very cheap, so you won’t feel too bad when it eventually becomes obsolete. As a learning tool, it does its job of being a starter kit beautifully. 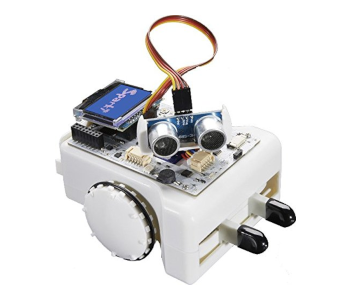 The Sparki Robot from ArcBotics boasts of being one of the widely used learning tools for STEM education. After all, schools like Stanford and MIT can’t all be wrong, can they? With over 100 lessons and more than 40 parts, the Sparki Robot offers learning opportunities for both beginners and advanced robotics users.

Beginners who might not be comfortable jumping straight into Arduino coding can take solace in the fact that the board of the Sparki Robot can be programmed using the block-based Scratch system. As you become comfortable with the functions that the robot can do, you can then start transitioning to the Arduino IDE that uses a language similar to C++.

With all the possibilities that the Sparki Robot offers, it feels quite justifiable that it comes with a price that is a bit higher compared to other Arduino robot kits. The good thing about the Sparki Robot is that it still offers learning even for advanced users, so it’s not a robot kit that you are going to outgrow after just a few weeks. 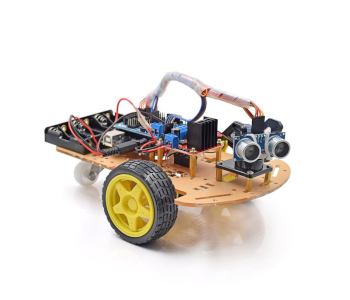 You would be hard-pressed to find an Arduino kit more affordable than this robot car kit from VKMaker. This stripped-down robot kit doesn’t exactly look great even when it’s fully assembled, but it’s still a great kit for learning how an Arduino works. It’s also an exceptionally cheap robot kit, which kind of makes up for its shortcomings, which we’ll get to later.

The VKMaker car kit uses an UNO R3 board which is compatible with the Arduino IDE. It also comes with a DC gear motor, a V5 shield, and four tracking modules that allow for obstacle avoidance. The components aren’t designed to snap in place, so a little soldering might be in order before you can start playing around with this robot kit.

Where the VKMaker ultimately fails is in providing good documentation on how the robot kit is put together. The manual does a very poor job of explaining the process, although you can always turn to tutorial videos and the Arduino community for help. The included CD also comes with a prepare Arduino test code that you can load directly to the UNO board to see how it works. Of course, the whole point of the kit is for you to write your own code eventually.

Despite its simple appearance and poor setup documentation, the VKMaker robot car kit is still a solid learning tool if you can figure out how to put it together. Since the wiring for this kit is a bit more complicated compared to others, you’re bound to learn more about electrical circuits work. It may be quite daunting, but you can take comfort in the fact that this is a really cheap Arduino robot kit. 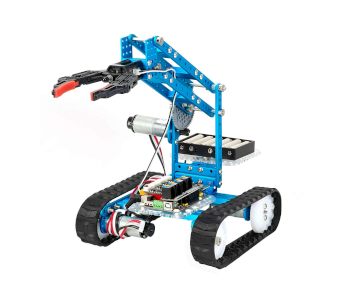 From a budget option, we move to one of the best-looking robot kits in the market. The Ultimate Robot Kit from Makeblock has parts made up of anodized 6061 aluminum and threading connections that make setup very quick. The robot also looks very good in any of the 10 application scenarios that are available to it.

Aside from the superior build quality, the versatility of this robot kit is one of the factors that really make it stand out. You can make a camera dolly, a platform for 3D scanning, an ant that can walk around on its spindly legs, or a fully functioning catapult. The MegaPi control board that runs all these robots is compatible with graphical block-based programming for beginners. More advanced users can also opt for Arduino or Python programming.

When you reach the point where you think you’ve done everything there is to do with the Ultimate Robot Kit, you can still expand its horizons by adding on any Makeblock module to it. Just make sure that you are buying pieces that are compatible with the MegaPi control board.

The robot kit does not come with all the directions you’ll need to build all 10 robots, but part of the fun is the discovery of how the more advanced robots are assembled. In any case, you can always look for tutorials online to fill in the gaps in the robot kit’s documentation. 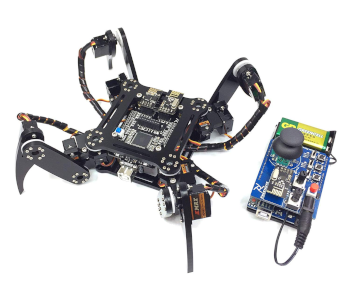 This is one of the strangest looking Arduino robot kits in the market, which is also part of its charm. Instead of a car or an upright humanoid figure, this robot kit takes an insect-like quadruped form. Because of its unusual appearance, assembling this robot and seeing it come to life becomes an even more fun experience.

Living up to its beginner-friendly claim, the Freenove robot kit comes with all the parts and instruction you’ll need to fully assemble it. All parts are clearly labeled and are pertained to by the assembly manual. The software for the Arduino Mega 2560 can be downloaded from GitHub and interfaces with the board without a hitch.

What makes this robot kit an exceptionally fun kit to play with is that the robot can be controlled via Bluetooth using an Android app. The board comes with a very simple prepared source code that is written in C. You may make changes to the source code or come up with your own entirely. Just make sure to recompile the code and reupload it to the board.

This robot kit has a glaring lack of sensors. It’s probably not necessary if you’re going to control the robot fully, but the robot does have a few expansion ports that can be used for sensor installation. The robot kit isn’t exactly the cheapest, so this absence of sensors feels a bit disappointing.

However, this insect-like robot is just pure fun. If you want your efforts to be rewarded with hours of entertainment making the robot crawl around, then this robot kit from Freenove offers a very unique experience.

Easily programmable, single board modules like the Arduino have made robot technology much more available to common people. While these robots don’t really serve any practical applications, they all excel as STEM education tools.

Arduino programming may not be as easy as visual block-based programming, but it’s a natural step towards being proficient with robotics and programming in general. Since Arduino boards are open-source and fully customizable, the possibilities they offer for talented programmers are virtually limitless. The single board design of Arduino also makes a low-cost alternative to more advanced robotics.

The Arduino robot kits we’ve listed above are highly recommended, especially for beginners. Every step of the way, from assembling the robots to programming on their boards, offers a carefully designed learning experience.