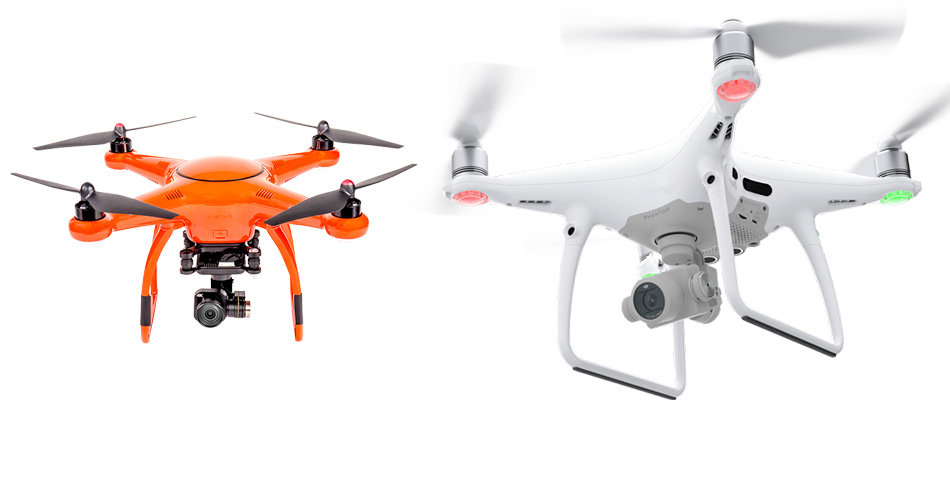 by Joseph Flynt
Posted on December 31, 2017
7 Shares
3D Insider is ad supported and earns money from clicks and other ways.
DJI has just released the Mavic Air 2. See all of the specs here.

Autel and DJI are two big-name drone manufacturers who are currently battling it out. But which has the best machines? Well, we will be comparing DJI’s Phantom range, Inspire 2, Mavic Pro, and Spark, against Autel’s X-star drones. These are each companies’ major drone models, and all are still currently being produced. An overall winner will be determined, as well as the best value for money.

A major reason to get a drone is for taking amazing aerial footage. For those that inspire to do so, you will need a decent camera. Check out the specs below.

As you can see the Phantom 4 Advanced, Phantom 4 Pro, and Inspire 2 are the clear winners. They really put the Autel drones to shame, with a higher megapixel and frame rate. This means they can take crisper and more high-definition photos and videos.

Check the flight capabilities for each drone below. Just remember these are maximum figures. Wind conditions, the drone’s operational mode, and other factors can affect them.

The Inspire 2 leaves all other models in the dust with a staggering 58mph max speed. Enough said.

Now, every minute can seem like an hour when fully engaged in flying your drone. That’s why flight time is very important. The Phantom 4 Advanced and Phantom 4 Pro are the clear winners with the ability to stay airborne for 30 minutes. They are closely followed by the Inspire 2 and Mavic Pro with 27 minutes, and then the X-star drones lagging behind a bit with 25 minutes.

The max range is the total distance a drone can fly away from its controller before losing the signal. Just remember, interference levels and the nature of the landscape (hills etc.) can affect signal coverage. The closer a drone gets to its maximum range the higher likelihood of connection dropouts.

Also be aware that it is illegal in many locations to fly a drone beyond your field of vision.

You will now notice the main difference between the X-star and X-star Premium. Everything about them is pretty similar except for the control range. The X-star Premium has double that of the X-star.

The overall winners are the Phantom 4 Advanced and Pro, the Inspire 2, and the Mavic Pro with 4.3-mile ranges. This is due to their incorporation of DJI’s Lightbridge Technology, which allows for a much greater range than a wifi connection.

Autel’s X-star drones controllers look very similar to those of DJI’s Phantom range and Inspire 2. Put them side by side, and you will not notice a lot of difference. Each has similar dimensions, two control sticks, an array of buttons, and a mount for attaching a smartphone or tablet.

Overall we reckon the Mavic Pro has the best controller. It is small, easy to use, has a data screen, and of course, you can mount your smartphone or tablet to it.

The Phantom 4 range, Inspire 2, Spark, and Mavic Pro all have dedicated obstacle avoidance systems. These detect obstacles ahead and downwards, to automatically prevent an accidental collision. The Inspire 2 can also detect obstacle above it, while the Phantom 4 Pro has sensors on its sides and rear, which allow for 360 degrees of obstacle detection.

Each drone uses GPS and GLONASS positioning for maximum accuracy. They also use vision positioning modules. These are downwards facing sensors that help each drone determine it position when low to the ground. This allows them to fly effectively at low altitudes and maintain hover accuracy without wobbling around too much.

There is no overall winner in this category.

Each drone comes with a variety of intelligent flight modes allowing for much greater control. Some of the modes that are consistent with all models are described below.

These are just a few examples. We could literally write another whole article describing all the modes for every drone. However, we will leave it at that. As every user is different and will want to fly their drone in different ways, its hard to know exactly what modes are most suitable, which makes it difficult to select an overall winner in this category.

Check out the approximate Amazon prices for each drone below.

As you can see the cheapest drone is the Spark at $550 while the Inspire 2 hits the other end of the scale at a massive $2,900.

To be fair, the results are looking a bit one-sided when it comes to DJI vs Autel. The X-star drones don’t cut it in comparison to DJI’s latest models.

Let’s analyze these results. First off, the Phantom 4 Advanced and Pro have the same score. However, the Pro model has side and rear obstacle sensors, making it a more capable machine. So really the showdown is between the Phantom 4 Pro and Inspire 2. They are similar in a lot of ways but also have some key differences.

We reckon the differences in flight time and max speed are an even trade-off, so the big question you have to ask is do you want to pay another $1,500 for the Inspire 2’s better camera. Serious filmmakers may want to, but we reckon the typical person is better off getting the cheaper Phantom 4 Pro.

The Mavic Pro is the best value for money. It is around $500 cheaper than the Phantom 4 Pro and $2,000 cheaper than the Inspire 2. For this lower cost, you are still getting a good all-round drone, which comes with obstacle avoidance, a 4.3-mile flight range, and an awesome controller.

It’s pretty obvious that we think DJI is the much greater drone manufacturer. Not only does it have the widest variety of drones but they are also more high-tech. In fact, the X-star models are rather dated when it comes to their cameras, lack of obstacle avoidance, and short control range.