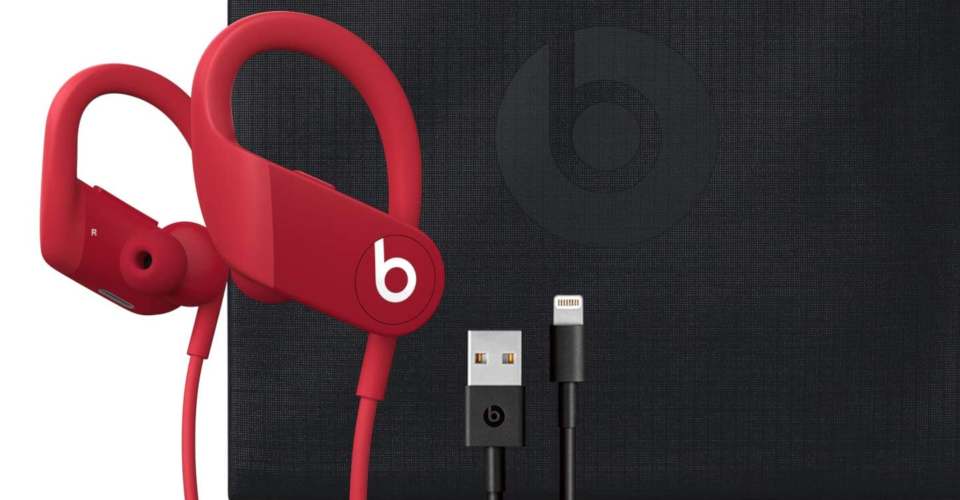 by Joseph Flynt
Posted on November 22, 2020
17 Shares
3D Insider is ad supported and earns money from clicks, commissions from sales, and other ways.

The fourth-gen Powerbeats arrived last March. The latest model in the popular line of wireless sports headphones has an updated design and boasts better performance, featuring the Apple H1 chip found in both the Apple AirPods Pro and the Powerbeats Pro. They are also around $50 cheaper than the original price of the Powerbeats3, which launched in 2016.

But while the fourth-gen Powerbeats are better overall, the third-gen Powerbeats are still worth considering when shopping for the best sports headphones, especially since they are better than their successor in some aspects. If you want a detailed look at the differences and similarities between the new Powerbeats 4 – which are simply called “Powerbeats” officially – and the Powerbeats3, we have you covered with this head-to-head comparison article.

The Powerbeats 4 and the Powerbeats3 are similar in many design aspects – including form factor, comfort, and stability – but the newer model is the better-designed product overall. They have a more streamlined and more balanced fit, better water resistance, and more convenient on-ear controls. They also support hands-free Siri controls on compatible iOS devices and include a Lightning cable.

On the other hand, the Powerbeats3 include a cable management clip and a rubberized pouch that offers better protection against damage. Some will also find their in-line remote simpler and easier to use than the on-ear controls of their successor.

The Powerbeats 4 and the Powerbeats3 belong in the same headphone category. They are wireless in-ear headphones designed specifically for sports use, featuring ear hooks for better stability. Unlike the Powerbeats Pro, both earphones are not completely wireless and still come with a short cable that connects to their earpieces. But at the same time, they lack a thicker and more solid neckband or collar module, separating them from true neckband headphones such as the Bose QuietControl 30.

Both earphones are more breathable than over-ear headphones and are comfortable to wear for casual use and sports use, with their ear hooks allowing them to stay securely on your ears. However, their ear hooks can be uncomfortable and hard to secure on your ears if you wear glasses. Both earphones come with four ear tip options, including a double-flange option, which is not usually included with in-ear headphones.

Although both are similarly comfortable and stable, the two earphones have a few minor differences in their overall fit. The Powerbeats 4 have a more streamlined design, with their audio cable connecting directly to the ear hook tips and hanging behind your ears. This makes for a more balanced fit compared with the Powerbeats3, whose audio cable hangs on the front side.

But unlike their successor, the older Powerbeats include a small cable adjustment clip, allowing you to adjust the cable’s tightness for different usages. You can tighten the cable around your head for a more secure fit during workouts or loosen it for casual everyday use. However, unlike some wireless sports earphones, both the Powerbeats 4 and the Powerbeats3 lack magnets for better security and cable management when wearing them around your neck when not in use. 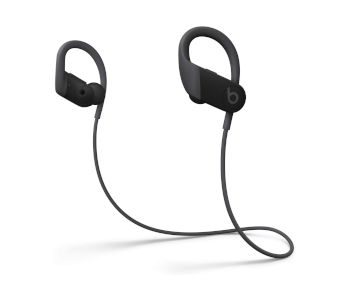 Both earphones have good plastic builds, with sturdy earpieces and durable audio cables, but the fourth-gen Powerbeats are better-built overall. They have an IPX4 rating for water resistance and are better-protected against sweat, which is important for sports use. While the third-gen Powerbeats are still advertised as sweat-resistant earphones, they lack an official IP rating, not to mention some people have reported having sweat intrusion issues with their less-protected in-line remote.

The Powerbeats 4 are better in this particular category, but only by a slim margin. Unlike their predecessor, they have an easily accessible on-ear control scheme, which is quite uncommon for earphones with a behind-the-neck cable. They have a dedicated power and pairing button on the left earpiece and a multi-function button and volume rocker on the right earpiece.

Registering single and multiple taps and long press inputs, the multi-function button – or “b” button – is used for call and music management and for activating Siri or Google Assistant. If you have an iOS device, you also get hands-free Siri support, allowing you to make calls, play songs, and set alarms, among other things, without touching your earphones or mobile device.

The Powerbeats3 are more in line with other wireless headphones with a behind-the-neck cable, featuring a small remote integrated into the audio cable – but it’s positioned on the left side instead of on the right, which can be confusing at first. The in-line remote has a built-in mic and the usual three-button setup for call and music management and volume control.

You can also use the middle multi-function button to activate Siri or Google Assistant, but you don’t get hands-free Siri controls on iOS devices. In addition to their in-line remote, the Powerbeats3 also have a separate power button – which is also used for the Bluetooth pairing – on the left earpiece. Their control scheme is simpler overall, with their in-line remote featuring responsive buttons that don’t feel too stiff or mushy.

While they are bulkier than usual due to their ear hooks, both earphones are very compact and lightweight, making them easy to carry for everyday use. They will easily fit into most pockets and take up minimal space in your bag. Their carrying cases are different, though: The Powerbeats 4 have a drawstring pouch that you’ll find easier to cram into smaller pockets while the Powerbeats3 come with a rubberized pouch that provides better protection against minor physical impact and water spills.

With both earphones featuring a behind-the-neck cable design, you can simply wear them around your neck when not in use, which makes them easily accessible if you want to use them again. Some will find this setup more portable and more convenient for casual everyday use compared with a truly wireless setup. But as mentioned, both lack magnets in their earpieces for keeping them more secure around your neck, requiring you to still be mindful of them at all times.

The two Beats earphones include the same number of accessories in the box, but the items are not all completely alike. Both earphones include four ear tip options – including a double-flange option – along with a carrying pouch and a short charging cable. In addition to their different pouch designs, their charging cables are also different: the fourth-gen Powerbeats include a Lightning cable while the third-gen Powerbeats come with a micro USB cable.

The Powerbeats 4 are better than the Powerbeats3 in overall performance, but not by a considerably wide margin. Their audio reproduction is better, with a more balanced sound, while their integrated mic is slightly better at noise handling. They also have a better battery life per charge and include the newer Apple H1 chip. On the other hand, the Powerbeats3 provide better sound isolation, with lower sound leakage, and have a better wireless range.

While they certainly won’t impress serious audiophiles, the Powerbeats 4 and the Powerbeats3 are both good-sounding earphones that sound clear and detailed. Both have an emphasized bass, making them suitable for hip hop and electronic dance music – music genres that many people listen to when running, training, or working out. The bass and mid-range of both earphones are good, but their treble lacks detail.

The Powerbeats 4 are slightly better-sounding overall, with a less overpowering bass that some people will prefer, but both earphones should satisfy most consumers. In addition to listening to music, both are also suitable for general media consumption. You can’t modify their sound profiles, though, as they lack a companion app for sound customization, which can also be said for other Beats headphones. 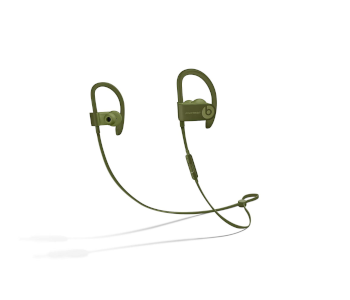 The fourth-gen Powerbeats and the third-gen Powerbeats both lack active noise cancellation (ANC) and simply provide passive noise isolation with their in-ear seals, but they are similarly subpar in that area – which is either good or bad depending on your preferences. Their subpar passive noise isolation is beneficial if you prefer to be more aware of your surroundings, especially when running or training outdoors.

Although they are not on the same level as actual open-back headphones, both Powerbeats models let more background noise in than most other closed-back earphones. But if you prefer sports earphones that provide a bit more noise isolation, the third-gen Powerbeats are the better option. They are slightly better at reducing background chatter and high-frequency noises, which is beneficial in some settings.

With their impressive 15-hour battery life, the Powerbeats 4 last three hours longer per charge than their predecessor. This makes them more suitable for ultramarathons and allows them to last an entire week on a single charge if you only use them for a couple of hours per day as your go-to workout headphones. If you intend to use them for commuting and traveling, they are also suitable for very long flights and road trips.

The Powerbeats3 are still some of the best among wireless earphones regarding battery performance, capable of running up to 12 hours per charge, but their successor is simply better. With their 12-hour battery life per charge, you can use them throughout your work shift and still get enough juice for a couple of hours for either your commute back home or a quick gym session.

Both earphones charge fast, requiring less than two hours of charging time to go from a dead battery to fully charged. Their quick-charge features are also identical, with a five-minute charge giving them one hour of playback, which is especially useful if they run out of battery right before you hit the gym or go for an outdoor run. On the other hand, both lack power-saving features such as an auto-off timer, which means you need to manually switch them off when not in use to conserve power.

Compatible with both iOS and Android mobile devices, the fourth-gen Powerbeats and the third-gen Powerbeats are similar in several aspects in this category. With iOS devices, both allow for seamless pairing and support audio sharing. Using the audio sharing feature, you can connect two compatible Apple and Beats headphones to one iOS device and listen to the same audio, complete with independent volume controls for each pair.

While the third-gen Powerbeats have a better wireless range, their successor has the advantage in this category overall. The fourth-gen Powerbeats include the Apple H1 chip while their predecessor has the older Apple W1 chip. With their H1 chip, they allow for improved battery performance, better signal stability, lower latency, and hands-free Siri control on compatible iOS devices, with the latter being an especially convenient feature for many people.

The two Beats earphones are similarly limited to Bluetooth connectivity, with no option to switch to a wired connection when their batteries are depleted. In addition, they lack multipoint technology for connecting with two devices at the same time and lack a companion app for customization, with the latter being typical for Beats headphones.