by Joseph Flynt
Posted on February 18, 2014
15 Shares
3D Insider is ad supported and earns money from clicks and other ways. 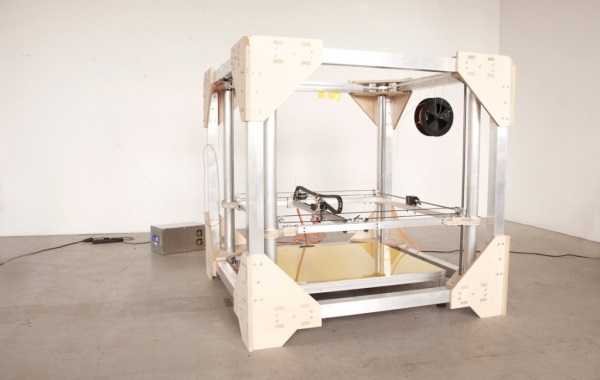 Need some new furniture, or perhaps you want to print a load of objects at the same time? Berlins Lukas Oehmigen and his friend Marcel Tasler have created a printer that could be big enough for both of those things, and they’ve named it the BigRep One.

As the name implies, the BigRep One is big, in fact very big, with a build volume that stretches to a gigantic 1,147 x 1000 x 1,188mm or just over one meter cubed. The massive build size makes the BigRep the largest commercially available fused deposition modelling (FDM) 3D Printer on the market.

The BigRep is constructed from aluminium and custom CNC’d components have been used. It incorporates dual extruders and can print objects up to 100 microns in layer resolution, an impressive feat for such a large machine. A standard range of materials are available to print in, which include PLA, ABS, PVA, HDPE, PC, Nylon, TPE, Laywood and Laybrick.

Oehmigen and Tasler started the project two years ago and Newten Ventures, a Berlin-based investment frim funded the project. The BigRep team used the printer to print designs for the Exploration Architecture’s show and the first production version began development at the end of last month.

With the massive build volume, comes a massive price. At $39,000 a pop, one has to question the rational behind buying a BigRep. FDM technology is notoriously slow and printing an object that would fill the build volume could take an age. The printer itself seems to be a scaled up version of a standard RepRap, and we’re not sure where the incredible price increase comes from. But, we imagine someone, somewhere will find a use for this enormous 3D printer.