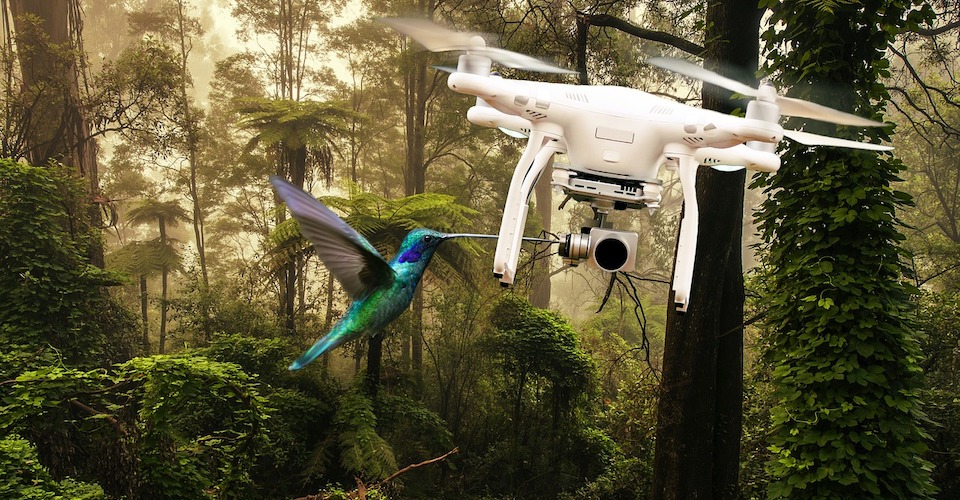 How to Avoid Bird Attacks on Your Drone

by Joseph Flynt
Posted on January 29, 2019
17 Shares
3D Insider is ad supported and earns money from clicks, commissions from sales, and other ways.

Both recreational and professional drone pilots probably run through a mental checklist of possible things that could go wrong before they fly their drones. Whether it’s uncalibrated sensors, a poorly charged remote controller, or overcast clouds that make it seem like it can rain anytime, a lot of things can go South the moment a drone takes off. One danger that drone pilots worry about is the threat of their drones getting attacked by birds. How common is this and what can you do to avoid bird attacks?

Incidents of bird attacks on drones

There have been plenty incidents of drones getting attacked by different types of birds. Most of them are also well-documented, making them amusing to watch especially if it’s not your drone on the other side of the attack.

Hunting birds, such as eagles and hawks, are especially dangerous. They can be very territorial, and they will treat any flying object as a prey. Being apex predators, these birds are not afraid of anything. An exceptionally large hexacopter might be intimidating, but Phantom 4 drones have been known to get snatched out of the sky without hesitation.

In 2017, a fixed-wing drone being flown by Daniel Parfitt was attacked by a wedge-tailed eagle, a particularly aggressive and territorial bird found in many parts of Australia. The $80,000 drone’s carbon fiber and Kevlar fuselage were easily torn by the eagle’s talons. This incident is so common in Australia that Rick Steve, a survey superintendent who uses drones to survey mining pits, has reportedly lost 12 drones over a span of 2 and a half years due to eagle attacks.

Downing drones is not an activity exclusive to birds of prey. The drone of a group of golfers who were shooting videos over a golf course crashed when it was attacked by a group of vengeful geese. Seagulls have also been known to chase drones as they fly out to sea, an especially dangerous scenario for the owner of the drone.

The potential of birds to down drones has been recognized the world over, with some law enforcement groups even training eagles to take down rogue drones. Videos have released showing how the Dutch police have trained eagles to snag the body of a quadcopter while avoiding injuring itself with its rotors.` This exercise was started as a response to a growing number of drone-facilitated crimes, such as smuggling of illegal drugs. Whether this method of crime abatement will take off soon is anyone’s guess.

What can you do to avoid them?

Knowing the potential damage that a bird attack can do to your drone, it is in your best interest to avoid them altogether. This is the best advice we have heard from people who have experienced bird attacks.

Although this knowledge is not applicable in most cases, there are certain areas that are known to have a nearby nesting location for predatory birds. Aside from their finely-honed hunting skills, these birds frequently hunt in packs. You might be able to outrun a single hawk but having three of them circling your drone will leave even the most experience drone pilot in a cold sweat. It’s best to leave them alone in their hunting ground.

2. Fly in the early morning

It is a well-known phenomenon that birds use thermals – rising air from the hot ground – to make it easier to fly around. This is the reason why most predatory birds actively hunt in the late morning to afternoon. If bird attacks are a concern in the area where you are flying, then it’s best to schedule your flight in the early morning while the air is still cold. It’s not a guarantee that there will be no birds during these hours, but your drone has a much better chance of leaving scot-free.

If you drone gets caught in the crosshair of a bird, then it’s time for you to do some evasive moves. You can react much better if you can see your drone, so you might want to put some reflective or colored tape on it as a safety precaution. This point also stresses how important it is to keep your drone within line of sight – FPV view is simply too restrictive for you to react to a bird.

4. Stay away from areas rich with prey

Chicken farms or any area rich with small animals are prime hunting grounds for predatory birds. For commercial drone pilots who might be paid to do drone jobs specifically in these areas, this might not be an option. However, recognizing that a hawk or eagle might just appear out of the clouds will keep you on your toes and have you carefully scanning the sky the whole time your drone is flying.

All kinds of birds are exceptionally mobile during mating season as they take to the skies to find a partner. Believe us, a sky full of birds is not something you want to fly in. If there are flocks of birds already flying around before you take off, then it might be a good idea to not take off at all and to fly another day.

How do I deal with bird attacks?

Despite the best measures to avoid bird attacks, they can still happen. After all, predatory birds are skilled hunters and you might now even know of their presence until they’re right on top of your drone. Many people have tried different things to ward off birds: painting their drones bright colors, speeding up, or slowing down. None of these have worked so far.

Should you find your drone as the target of a bird attack, then these are the best evasive maneuvers to make:

When birds attack, they usually do it from above. Everyone is probably familiar with the visual of a hawk or eagle diving from above and snatching its prey with its talon at the last moment. Knowing this behavior, the worst thing that you can do as a drone pilot is to attempt to land your drone right away. Not only does this open your drone to attacks from above, but drones are not designed to descend quickly. Before you know it, your drone will end up descending – just not in the way you wanted it to.

Most drone pilots recommend that you fly up when faced with a bird attack. This seems counterintuitive, but it is exactly the aberration in this reaction that seems to rattle predatory birds. Not only is flying up not the normal reaction of the prey of these birds, but it is also a very unnatural motion. Perhaps it is the unexpected nature of vertical ascensions that makes these birds realize that this machine they are hunting is not a bird – and therefore, nothing of interest to them.

Drone pilots who have experienced bird attacks and have reacted by flying up have stated that birds tend to lose interest after this maneuver. This window is your chance to pull out of the area. You can choose to activate the return-to-home function, which is usually slow, or fly your drone back home at the fastest speed possible.

In any case, do not tempt fate by attempting to continue flying in the area. The birds might have ignored you once, but they are still territorial and will not appreciate your continued presence in their domain.

We would like to send a message to drone pilots that in situations where drones are being stalked or attacked by birds, the real danger is not to your drone. The more important matter is to avoid inflicting injuries on the birds, inadvertent though it may be on your part.

The rapidly spinning propellers of your drone have the potential to cut serious wounds on attacking birds. When not tended to, these wounds can infect and ultimately lead to the death of the injured bird. Even if it’s not that serious, the ability of birds to hunt can still be seriously compromised. We have heard of accounts of pilots who just chose to shut down the propellers of their drones while it was being attacked to prevent injuring the attacking bird.

While we all love our drones, having them get damaged is still a better option than inadvertently maiming endangered wildlife such as eagles or hawks. Keep in mind that one of the tenets of responsible drone flight is to avoid injury – and that should also include animals.

Birds attacking drones is just one of the many things that a drone pilot has to worry about whenever they launch their drones. However, we need to respect that we share this airspace with others – people and animals alike. These birds, aggressive as they may be, probably see our drones as either potential prey or a threat to them.

Should you find yourself in a position where your drone is being threatened by birds, then your best course of action is to pull out. It is also your responsibility as a drone pilot to conduct due diligence of the area where you are flying, so you might want to ask around if there are birds that frequent the place.

In contrast to the other problems that drone pilots usually face, the threat of bird attacks is probably not something we can address without hurting the birds. Right now, the best option is to just avoid this danger altogether.