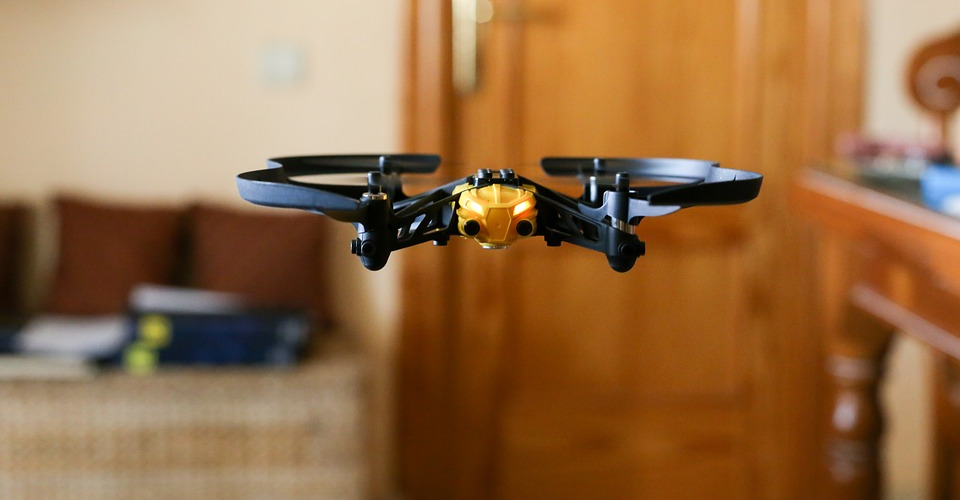 Brushless Tiny Whoop: What They Are and the Best Models

by Joseph Flynt
Posted on November 19, 2020
21 Shares
3D Insider is ad supported and earns money from clicks, commissions from sales, and other ways.
DJI has just released the Mavic Air 2. See all of the specs here.

When it comes to drones, bigger isn’t always better. We have seen this concept demonstrated in the rapid rise of popularity of ultra-portable drones like the DJI Mavic and Autel Evo lines. However, the concept of very small and highly portable drones isn’t new. Even before the first Mavic came along, there was already a very active community of tiny whoop enthusiasts.

While these “micro” drones obviously have limitations in terms of hardware, they have a unique appeal that has persisted through the years. What qualifies for a “tiny whoop” anyway and what models should a relative beginner go for?

What is a tiny whoop?

The term ‘tiny whoop’ has been used as a catch-all term for micro quadcopters. By ‘micro,’ we mean that these drones are really small – measuring around 8 centimeters across, a tiny whoop can easily fit in the palm of your hand.

To create such a small and lightweight drone, the integrated hardware has to be very limited. However, you might just be surprised to find what’s under the good of a tiny whoop. As you can expect, a tiny whoop has propeller motors, a flight controller, a transmitter, and a battery. Surprisingly, most tiny whoops also come with a camera capable of transmitting real-time video feed to a monitor or FPV goggles. More modern tiny whoops also come with integrated gyro sensors that help with flight stabilization, making them very easy to fly.

Another distinct feature of a tiny whoop drone are the ducted propellers. This boosts the propulsion efficiency of a tiny whoop, which is quite important given how small its propeller motors are. It also provides a measure of protection to the drone’s propellers.

Tiny whoop drones became popular because they are small enough to fly indoors and are incredibly fun to fly. They are fast and very maneuverable. There is no shortage of videos online shot in FPV from tiny whoop drones that showcase just how exciting flying them can be, especially when they weave in and out of tight spaces and small obstacles.

One of the reasons for why tiny whoop drones have inspired thriving communities is the fact that they can be easily built from separate components. This DIY appeal meant that enthusiasts could spend endless hours building and tweaking tiny whoop drones with the hopes of improving their power, speed, or handling. Since the components are so small, tiny whoop drones provide an inexpensive gateway to the world of DIY drones.

The ‘brushless’ half of the ‘brushless tiny whoop’ term refers to the type of motor that the drone has. Originally, tiny whoop drones were built using brushed motors simply because brushless motors weren’t as common several years ago. The popularity of brushless motors has only picked up in recent years, although they still aren’t the unanimous choice.

Gong for brushless instead of brushed motors presents several advantages, but there are still drawbacks to the technology that have kept brushed motors still quite relevant. =

One of the top reasons for why drone pilots go for the brushless route is because of the additional raw power that brushless motors offer. That extra bit of juice can make tiny whoop drones so much faster, allowing for more exciting flight experience. This can make brushless tiny whoops a little more intimidating for beginners, but more seasoned drone pilots will certainly get a kick out of the performance boost.

By the very principle of how a brushless motor operates, it requires less maintenance and lasts longer because the rotor and stator do not come in direct contact with each other. This heavily reduces wear and tear on the motor components, which means that you won’t need to have it replaced as often. Who wouldn’t want one less thing to worry about?

This feature is part of the standard firmware built into brushless tiny whoops (more on that later) which allows for a drone to fly back up even if it crashes upside down. Not only does this save your time by not having to pick up the drone every time it crashes, but it’s always fun just watching it flip around and go back to flying.

One of the best things about brushless tiny whoops having an active community is the wealth of firmware that community members have worked on through the years and offer for free. The two standout features of the widely-used BLHeli_S firmware are the support for 48 KHz ESC PWM frequency and RPM filter which improves the efficiency of the brushless motors, thereby extending the battery life.

Brushless motors may be more powerful, but that also means that they are harder to control. The better handling of tiny whoops with brushed motors is one of the major factors for why a lot of drone pilots still prefer brushed motor technology. With lower propulsion, brushed tiny whoops carry less momentum and have better maneuverability when handling corners or changing direction. 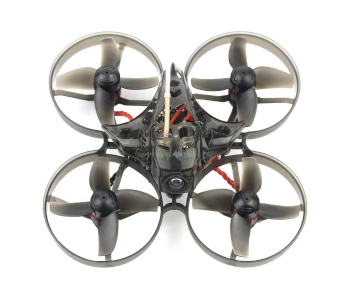 This brushless tiny whoop kit is a little more expensive than most but is a great starting point for those who want to get into this DIY craft. This is one of the more complete kits out there, so it’s still great value despite the high price tag.

This kit includes a 75-mm. frame, a Frsky transmitter (with EU and non-EU options), a Crazybee F3 PRO receiver, four KV1600 motors, four sets of propellers, an AIO camera, and four 250mAh batteries. Just about anything you’ll need to build your own tiny whoop is included in the kit, including a few basic tools. Take note that you will need to buy a controller and FPV goggles separately.

The Mobula7 is a fun and powerful drone that is great for flying indoors. The capability to swap between 1s or 2s batteries is an excellent feature, giving that little extra room for customization. The flight performance is good, especially since beginners can fly in stabilized mode. The included frame isn’t the best in terms of durability, so you might still want to avoid taking hard crashes.

Despite being a somewhat ‘complete’ brushless tiny whoop kit, it still takes considerable skill to put this whole drone together. This will make a great gift for someone who’s already into DIY drones. However, complete beginners may end up dumbfounded once they take a look at a drone that comes in separate components. 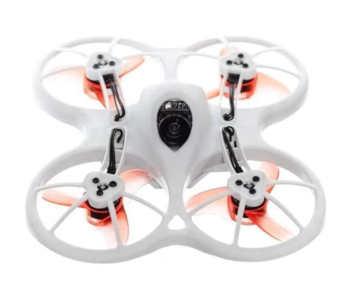 If you’re looking for a brushless tiny whoop that’s closer to being ready-to-fly, then the EMAX TinyHawk might just fit the bill. This micro-drone requires minimal assembly and comes with built-In gyro sensors, an EMAX Tiny receiver (compatible with Frsky D8 controller), a 450 mAh battery, and a 600 TVL CMOS camera. As with any of the other products in this list, the remote controller and FPV goggles have to be purchased separately.

This tiny whoop is a little heavier and more robust than others with its polypropylene frame and a total weight of 42 grams. The frame is nearly indestructible, although the speeds that this drone can go is limited by the use of only 1S batteries. The kit comes with no extra propellers, so it would be a good idea to have a few spare ones on hand.

The Tinyhawk isn’t an absolutely perfect tiny whoop, as demonstrated by several reports of motor problems. This might come down to poor quality checking by EMAX. The range of the built-in video transmitter also isn’t the best, so you might want to stick to indoor flight with this tiny whoop. 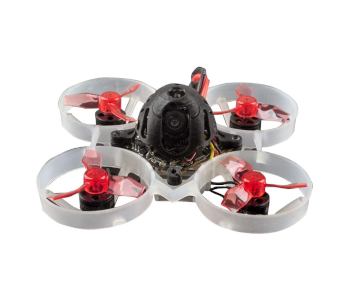 The Mobula6 is the predecessor of the Mobula7 from the Happymodel brand. Despite being an old model, the Mobula6 remains a favorite in the tiny whoop community. The model listed here is the 25,000 KV racing version.

An incredibly lightweight tiny whoop, the Mobula6 comes with a 65-mm. frame, a 25 mW VTX flight controller, a Frsky RX receiver, Nano3 CMOS 800VTL camera, and a 300 mAh battery. This is a surprisingly fast drone for its size and is suitably nimble for indoor drone races. In terms of value for money, it’s hard to go wrong with a model as reliable as the Mobula6.

As with the Tinyhawk, quality control issues may be holding back the Mobula6 from achieving high marks in reliability. Reports of motor failure are more common than we would like, and the battery connector that comes packaged in the kit fails to take advantage of the powerful 25,000 KV motors. 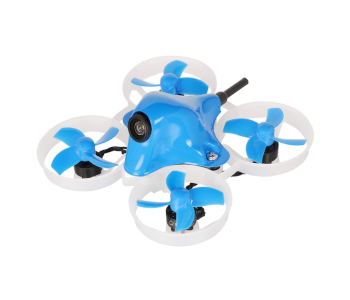 Light, fast, and simple – that’s the value proposition of the Beta 65 Pro 2 drone, which is a smaller version of the Pro series from the BETAFPV brand. Weighing in at only 24 grams, the Beta65 Pro 2 comes with modest 12000 KV brushless motors, an SPI Frsky receiver, two units of 300mAh 1S batteries, and a tiny AIO camera which has been specially customized to be lighter.

The lightweight build of this drone helps it seem more powerful, despite the small motors. It’s very fast, responds well to controls, and has a total flight time that can be pushed to more than four minutes.

That said, some of the components that come in the kit can be better. The battery connectors are poor quality and you’re better off swapping them out if you want to get better power draw. The camera also suffers from a lot of stuttering, perhaps as a consequence of designing it to be so small.

The Beta65 Pro 2 is a great introductory drone for those who want to get into brushless tiny whoops. More experienced users may want to go for a model that’s a little heftier and with better hardware. 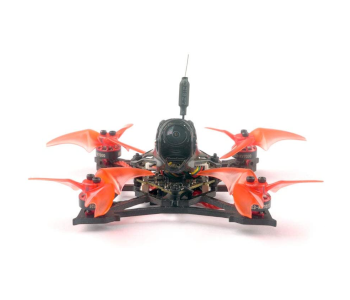 Now here’s something a little different. At first glance, the Larva-X tiny whoop instantly stands out because of its unusually shaped propellers. With a closer resemblance to wings than blades, the propellers of the Larva-X noticeably come with no ducts. The effect of this in terms of efficiency is likely to be significant, although we have no complaints about how quickly this tiny whoop moves.

Designed as a racing drone, the Larva-X comes with powerful 7000 KV motors. Happymodel offers several options for receivers, depending on if your remote controller is compatible with either Frsky or Flysky. The drone also comes with a Crazybee F4 Pro V3 flight controller.

Compared to the other entries in this list, the Larva-X is probably the farthest away from being ready-to-fly. It does not come with a camera and batteries, among other things. If you want to get the Larva-X to build a micro racing rig, then it’s going to be a huge investment in terms of the components you need to buy and the amount of work you need to get it to start flying.

Tiny whoops, whether with brushed or brushless motors, have a pretty dedicated following of hobbyists, racers, and professional kit makers. There’s certainly a different appeal to building your own drone from scratch as opposed to buying one that comes ready to fly out of the box. Tiny whoops provide this thrill and satisfaction without having to spend several hundreds of dollars.

If you want to get into tiny whoops, then you don’t even need to buy a fully assembled kit to get started. True to the DIY spirit, buying components separately and putting them together is always a viable option.