Build a 3D Printer from Old Computers for Less Than $70

by Joseph Flynt
Posted on June 4, 2014
23 Shares
3D Insider is ad supported and earns money from clicks and other ways. 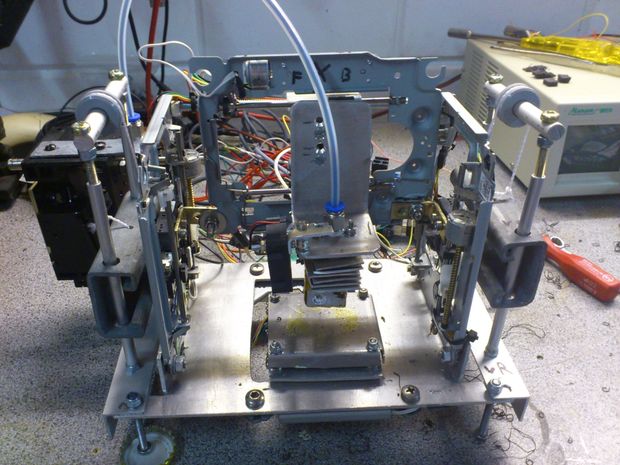 Cost is a major factor when purchasing anything, especially 3D printers. As we’ve seen with the success of the Micro 3D printer, people are willing to buy into the technology at the right price. The Micro 3D printer was initially available for just under $200, but what if I told you, you could build a 3D printer for $70.

Instructables user, Gelstronic has been recycling old computers and printer parts to build what he calls, the “Poor Man’s Printer”. He sourced four different PC’s and used parts like the power supply and motors from the DVD drives to build the printer. A stepper motor from an old printer was used for the extruder, which was built from an old HP printer.

All up, the total cost of the printer was $67, which includes the parts he bought; a hot end, which cost $20 Euro, and a Stackable Motor Driver Shield at 6 Euro. He also found an Arduino Mega 2560 board for 10 Euro and a few other components such as tubing and electronics cost him about 5 to 10 Euro. Many of the nuts and bolts weren’t included in the total cost because Gelstronic already had an assortment in his garage.

While Gelstronic’s printer may be made out of the sort of things you’d find in a skip, it can print in both ABS and PLA filament at a layer height of 80 microns (MakerBot can print at 100 microns to put it in perspective). The build volume is pretty small at 40 x 40 x 40mm, but what can you expect for $67.

Check out the demo below to see the Poor Man’s printer in action and there’s a post on Instructables about the printer.