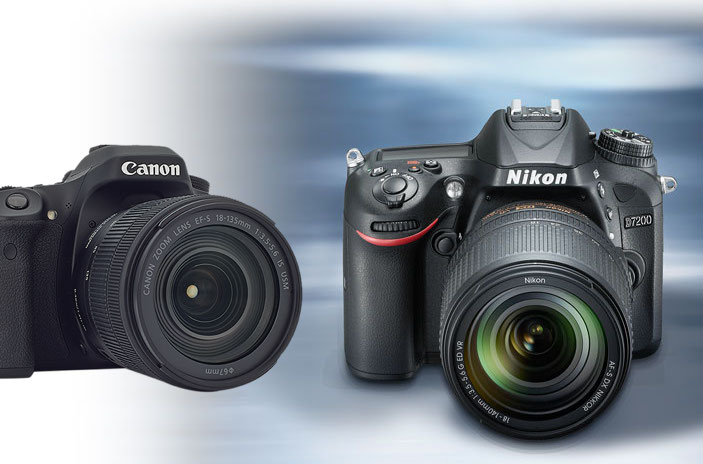 by Joseph Flynt
Posted on March 20, 2018
15 Shares
3D Insider is ad supported and earns money from clicks, commissions from sales, and other ways.
DJI has just released the Mavic Air 2. See all of the specs here.

The Canon 80D and Nikon D7200 are two high performing cameras. However, neither is cheap. That’s why you need to take care in your selection. To make things simple, we have compared each camera across all the important categories. We have assessed their features and specifications so you can know which camera is best for which tasks.

One megapixel is one million pixels. Each of these squares of data is the building blocks for a photo. The more of them available, the higher the image quality. Now, in saying this, users will find that both cameras have 24.2 megapixels sensors, which allow them to capture crisp, sharp images.

A camera’s ISO setting determines light sensitivity. The higher the figure, the greater the sensitivity and vice versa.

Neither camera has a significant advantage so we can call this category a draw.

If you want to capture good shots of a fast-moving subject, then you can do so using burst mode. This mode allows cameras to take a range of photos in rapid succession.

The 80D can shoot at 7fps when in burst mode, which simply means that the device can take up to seven photos per second. The D7200’s burst mode isn’t quite as fast at 6fps.

A camera’s autofocus capabilities are what determines how easy it is to lock onto a subject. The main factor to consider is the number of autofocus points. The more that are available, the easier it is to both manually and automatically focus on a subject, as well as track a subject as it moves between points.

The 80D uses the Canon EF/EF-S mount with 292 available lenses. The D7200 uses the Nikon F lens mount with 280 available lenses. As you can see, there are more than enough lens options for both devices. While there is a difference of 12 lenses, this doesn’t have much of an impact so we will call this category a draw.

Just remember that neither camera can record slow-motion video.

Overall, not a lot of differences and it’s hard to say that one camera is more portable than the other.

The 80D has quite a different screen than the D7200. Firstly, it has a touchscreen, which makes menus easy to navigate, just like your smartphone. Secondly, the screen is articulating, which gives users more flexible shooting positions. The D7200’s screen is neither articulating nor a touchscreen.

We feel that the 80D’s articulating touchscreen more than makes up for its slightly lower resolution.

The 80D only has a single SD card slot while the D7200 has two. The extra slot is handy for maximizing photo and video storage.

Let’s look at some more strengths that each camera has in common.

Let’s look at their common weaknesses.

A new 80D costs around $900 on Amazon. Bundle deals are also available for around $1,300. These typically include a range of lenses, a tripod, SD card, carry case, and other accessories.

A new D7200 costs approximately $1,000 on Amazon. A bundle deal with multiple lenses, a carry case, SD card, tripod, and other accessories costs around $1,240 on Amazon.

It’s pretty close in this category. The 80D is cheaper on its own. However, the D7200 has the better value for bundle deals. We will call it a tie.

We have tallied up the scores, and you can see the winner below.

The chart below makes it easy to compare the specs and features of each device quickly.

Which Camera is Best?

It’s a close battle, but for most people, the Canon 80D is the better option. It has superior autofocusing and burst mode to help users capture the best shots. It can also record 1080p video at 60fps. The articulating touchscreen also makes operation very user-friendly.

While the Nikon D7200 has slightly longer battery life, as well as dual SD card slots, these factors play less of an important role in the camera’s operations.

However, when it comes to lowlight photography, the Nikon D7200 comes out ahead of the Canon 80D with a better ISO range.