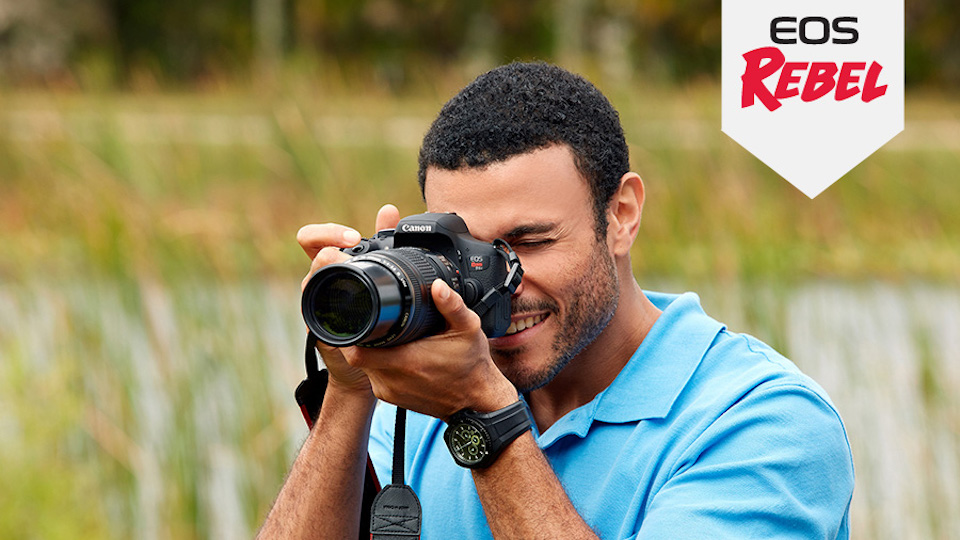 by Joseph Flynt
Posted on February 6, 2018
13 Shares
3D Insider is ad supported and earns money from clicks, commissions from sales, and other ways.

As is obvious by their names, both the Canon Rebel T5 and Canon Rebel T5i are very similar cameras. However, there are some key differences that a savvy buyer needs to know. We have compared the two devices across a range of categories so that you know exactly what you’re getting.

Each camera will be given a total score to help give you an indication of which one is best. We will also discuss the price of each model to work out which one is the best value for money.

Both cameras have 18 megapixel sensors which allows them to take very high-quality still shots. These still shots have a size of 5184 x 3456 pixels and can be either JPEG or RAW format.

For those don’t fully understand megapixels, you should be aware that one megapixel is one million pixels. Each pixel is a small square of data. The more of these squares present in an image the sharper and clearer it will be.

The difference between RAW and JPEG format is quite straightforward. RAW format is basically what its name suggests: unedited raw data. This data is not suitable for printing or editing because it has not been processed properly. Just imagine a RAW file as a negative found in film photography. A JPEG file is simply a processed and compressed version of a RAW file. This JPEG file can be edited and viewed using a range of different software.

This category is a tie.

The T5i has a DIGIC 5 image processing system, which is an upgrade from the T5’s DIGIC 4 system. What this means is that the T5i is slightly better at processing images and its burst mode is superior. The T5i can shoot 5fps in burst mode while the T5 can only shoot 3fps. This makes the T5i superior when taking photos of a moving subject.

Both cameras have auto focusing systems based on nine auto-focusing points. However, the T5i’s system is slightly more effective than that of the T5. It is more sensitive and works better in low light conditions. This is because the T5i’s auto-focusing points are cross-type rather than standard-type.

Both cameras have a shutter system with a max speed of 1/4000 of a second. The slowest shutter speed is 30 seconds.

For those unaware, shutter speed is the length of time that the camera’s shutter stays open. Think of this shutter like a curtain. The longer it stays open the longer the camera spends taking a photo.

A long shutter speed causes a blurred motion effect. Simply put, moving subjects in the photos will appear blurred across their direction of motion. This can achieve a feeling of speed: for example imagine a sports car with blurred wheels.

A short shutter speed has the opposite effect. It effectively freezes subjects in place. Even a fast moving subject such as a vehicle or droplets of water will appear completely sharp, defined, and locked in place.

Overall another tie in this category.

Each camera is compatible with dozens of different EF and EF-S lenses. There is no difference in compatibility between the two cameras. They can each use the same ones.

When selecting a lens, make sure you pay attention to the focal length and maximum aperture. The focal length is the number in millimeters. The higher this is the greater the lenses zoom. If the number is lower, it means the zoom will be less, but the photos taken will be wider. Lenses with two numbers in millimeters are adjustable along that range.

The maximum aperture tells you how much light the lens can take it. If the number is high then less light is taken in. If the number is low then the greater the amount of light captured by the lens. This plays a significant role in the final outcome of photos.

This is where some significant differences crop up. The T5 has a 3” LCD screen with a resolution of 460k-dots.

Now the T5i has a much better LCD screen with a resolution of 1040k-dots. This also operates as a touchscreen so you can control the camera just like you would your smartphone. Lastly, the T5i’s screen can tilt which gives it another advantage over the T5.

Neither camera is water resistant or has weather sealing, so keep then away from water and be careful when filming outdoors. If you do require something waterproof then you need to consider different camera models, such as those found in the Canon PowerShot range.

The T5 goes for around $280 on Amazon. For around $370, you can get a bundle deal that includes two lenses and a carry bag.

These prices are subject to change so we recommend jumping on Amazon to see the latest deals.

The T5 is noticeably cheaper than the T5i.

Check out the overall scores below.

And the side-by-side comparison below.

The Canon Rebel T5i is the superior camera but is it worth the extra price tag? Overall, both cameras are pretty similar and whether one you choose will do a pretty good job.

If you want an entry-level camera that does everything pretty well then just get the Canon Rebel T5. You can save around $270 dollars while still getting an 18-megapixel camera that films in 1080p. The only letdowns are that it doesn’t have a touch screen and its auto-focusing and burst modes aren’t as good.

On the other hand if you need the most user-friendly device possible (touch screen), as well as enhanced auto-focusing and image processing, then pay the extra to get the T5i.

Overall, we reckon the T5 is best for the novice photographer or a person that is going on holiday and wants to return home with some quality video and photos. On the other hand, the T5i is aimed more at the intermediate photographer that has experience with a range of cameras and doesn’t want to settle for second best.