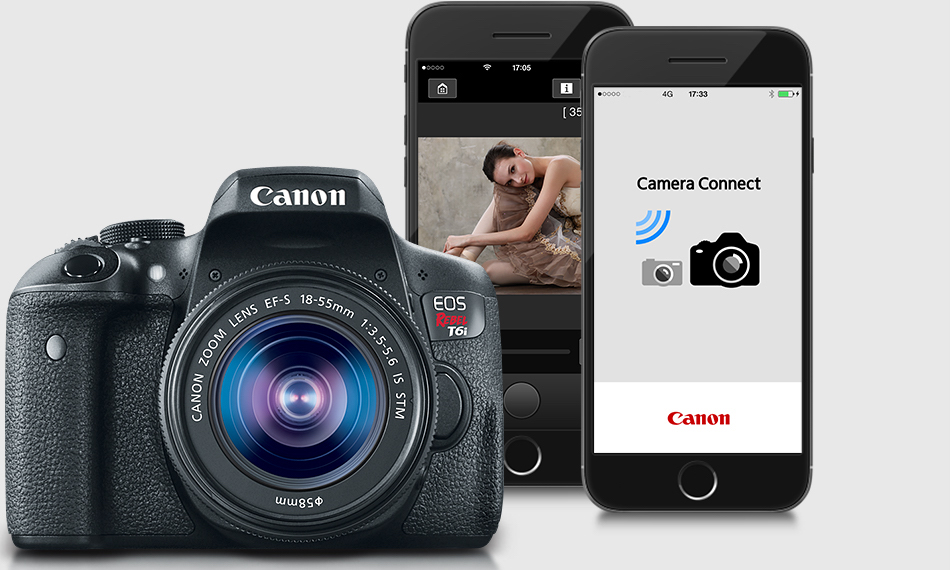 by Joseph Flynt
Posted on March 1, 2018
15 Shares
3D Insider is ad supported and earns money from clicks, commissions from sales, and other ways.
DJI has just released the Mavic Air 2. See all of the specs here.

The Canon T5i and Canon T6 are two powerful mid-range cameras. Both have a lot in common. However, there are still some crucial differences. To find out what they are, we will face them off across a range of categories. Then, at the end, we will tally up the scores. We will then let you know which one to buy, whether you’re a novice photographer or have been obsessed with cameras for decades.

The T5i brings the scales to 580 grams. The T6 is somewhat lighter at 485 grams. Not a big difference, however, it does make the T6 easier to carry around. If you’re going to be holding up the camera for a long time, while waiting for the perfect shot, then it will be more comfortable.

For those unaware, one megapixel is one million pixels. These pixels are squares of data that make up an image. The more you have, the more detailed the photo will be.

We are pleased to say that both cameras have powerful 18-megapixel sensors. They can capture clear and well-defined images with ease.

Don’t think that you’re limited to still-shots. You can shoot video footage as well. Both cameras can record video at the same definition and frame rate.

Another draw in this category.

If you are going to be snapping photos of a fast moving subject, such as a bird or vehicle, then you may want to shoot in burst mode. This allows a string of photos to be taken in quick succession. You can then sort through the results to select the best option.

The T5i can shot at 4.8fps when in burst mode while the T6 can only shoot at 3fps. This means that you will end up with more image options when using the T5i.

The T5i has nine cross-type auto-focusing points while the T6 only has one. These points improve autofocus performance so that the camera can effectively target a subject.

The T5i’s screen is far superior to that of the T6. First of all, users can tilt and swivel the screen for the most flexibility when taking photos.

The T5i also has a touchscreen. This makes it simple to use (just like your phone). Users can quickly and easily navigate through the menus without hassle.

Users can take around 500 photos with the T6 before its battery dies. In comparison, the T5i can only take 440 shots. This is a 60 shot difference that could really add up, especially if you are going to be shooting for many hours at a time.

The T6 has built-in Wi-Fi, while the T5i misses out on this feature. Wi-Fi is handy as it allows photographers to instantly backup their photos and makes them less reliant on SD card storage. If they are a social media junkie, they can share their best snaps straight away.

If audio quality is important to you, then you will want a camera with a microphone jack. Only the T5i includes one. Just keep in mind that neither camera has a headphone jack.

You can purchase a new T5i off Amazon for around $400. For $600 you can get a bundle deal that includes a lens kit, carry case, SD card, and a range of other accessories.

There are so many different bundle deals available, so it pays to carefully scrutinize what each one includes.

The T6 is the most affordable camera.

Each camera has a variety of strengths in common. We will quickly cover them so that you know exactly what you’re getting

We will do the same again, but this time for each model’s weaknesses

We have tallied up the scores below.

The chart below also makes it easy to compare each model side-by-side.

It’s a tough decision considering both cameras have so many similarities. They are both built around the same core design, and regardless of which one you choose, you will be getting a powerful device. However, we still reckon the T5i is the best option for most photographers. This model has a superior screen, burst mode, and auto-focusing when compared to the T6. It also includes a microphone jack.

While the T6 does weigh less, incorporates Wi-Fi, and has a longer battery life, when it comes to taking photos, the T5i is superior. Honestly, most users will barely notice the difference in weight or battery life.

The cameras are also similarly priced, so budget doesn’t really factor into the decision. Just pay the extra $50 to get the T5i.