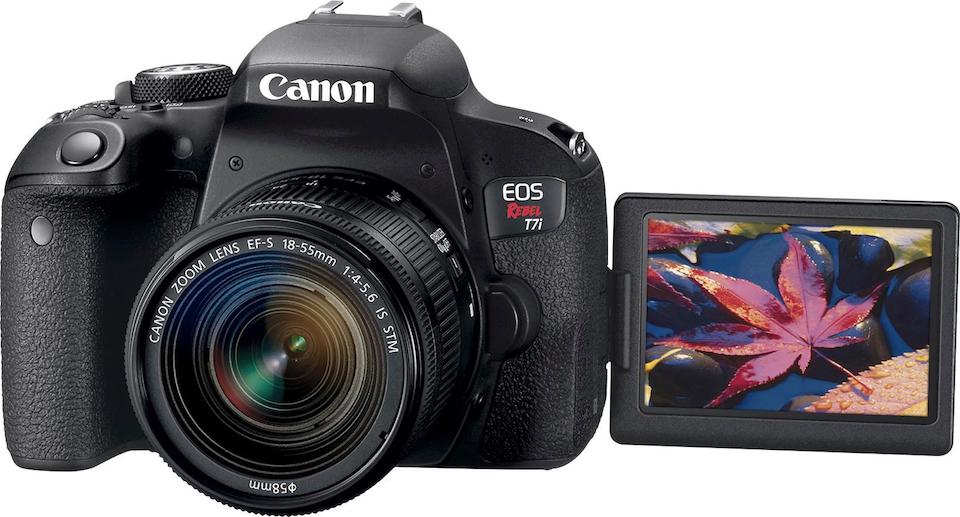 by Joseph Flynt
Posted on March 28, 2018
17 Shares
3D Insider is ad supported and earns money from clicks, commissions from sales, and other ways.

The Canon T5i, T6i, and T7i are three midrange cameras that have a lot in common but also some important distinctions. We will compare all three model’s specs and functions so that it’s clear what each model can do and how well they can do it. You don’t want to waste money on a device that isn’t perfect for you, so it pays to consider each one carefully.

We will award points when a camera wins out against the others; then at the end, we will tally up the results. You will be able to see which model is best overall and which is the best value for money.

One megapixel is one million pixels. The more of these squares of data that are present in an image, the higher the quality. Now, the T5i has an 18-megapixel sensor while the T6i and T7i have 24-megapixel sensors. That makes the latter model more powerful when it comes to still photography.

ISO is a camera setting that dictates light sensitivity. When shooting in sunny conditions, a low ISO range is recommended while higher ranges are necessary for good results when shooting indoors or at night.

If you regularly shoot at sunset, nighttime or indoors, then the T7i’s greater ISO range will be useful.

All three models have the same sized sensors of 22.3 x 14.9 mm. What this means is that each camera gives photographers the same flexibility when determining an image’s depth of field.

The more AF (autofocus) points a camera has, the easier it can hone in on a subject, as well as track subjects as they move between points.

When it comes to action, sports, and other photography with fast-moving subjects, burst mode is ideal. It allows a camera to shoot a string of photos in rapid succession.

All three cameras utilize the Canon EF/EF-S lens mount with approximately 299 lens options available. These include standard, telephoto, and wide-angle lenses. There is no difference in the category.

Remember, many cameras come with one or zero lenses. That’s why it pays to purchase a bundle deal to get them included. Alternatively, you could purchase them individually. Amazon has many options, and we will discuss these in the price section.

All three models can film high-definition footage. Check out the table below.

Each camera films at the same frame rates and the same resolutions. However, the T7i can also record 1080p at 60fps.

Keep in mind that neither camera can film slow-motion video and neither can record ultra-high definition (4K) video.

The T7i incorporates video stabilization technology that helps eliminate distortion when recording video. The T5i and T6i miss out on this feature.

All three cameras have pretty much the same 3” articulating touchscreen. The screen resolution is also the same (1,040k dots).

Articulating screens are handy as they allow photographers greater flexibility when choosing a shooting position. Touchscreens also make it easy to navigate menus, just like a smartphone.

Overall, this category is a draw.

The T6i and T7i have built-in Wi-Fi. This feature is handy for backing up and sharing photos wirelessly. Unfortunately, the T5i misses out on this addition.

The T7i has built-in Bluetooth while the T6i and T5i miss out on this feature. Bluetooth is handy for many reasons, such as sending photos to your smartphone.

Have a look at the physical information for each model below.

While there are no major differences, the T7i is slightly lighter and more compact than the other models. That’s why we rate it number one for portability.

A new, standalone T5i costs around $490 on Amazon. A bundle deal with multiple lenses, a tripod, SD cards, and other accessories costs approximately $620 on Amazon.

A new, standalone T7i costs about $750 on Amazon. A bundle deal with multiple lenses, a tripod, SD cards, and other accessories costs around $900 on Amazon.

Amazon prices frequently change, so it’s best to have a look yourself to see the latest deals.

It’s clear that the T5i is the most affordable device.

These devices also have a range of other strengths in common.

We have tallied up the scores, and the results are below.

You can easily compare the three different models using the table below.

Which Camera is Best Overall?

It’s clear that the Canon T7i has significant improvements over the earlier models. Still-photography is superior due to an enhanced ISO range, burst mode, and autofocus. The camera can also record 1080p at 60fps and incorporates video stabilization. Don’t forget about greater battery life as well as built-in Bluetooth. The Canon T7i is also the most portable of the three cameras because it is lighter and thinner.

Of course, these improvements don’t come free. The Canon T7i has a much higher price tag.

Which Camera is the Best Value for Money?

We feel that those on a budget and after the best value are better off getting the Canon T6i rather than the Canon T7i. By doing so, they can save around $160, while still getting a powerful camera for snapping photos and recording video. You won’t be getting as good an ISO range, burst mode, video frame rate or autofocusing, however, you have to expect some sacrifices for this lower price tag.

You could save another $100 still by getting the Canon T5i. However, you will end up with fewer megapixels and no Wi-Fi. For those seeking the best value for money, we still reckon the Canon T6i is the best option.