What’s the Difference Between Capacitors and Batteries?

by Joseph Flynt
Posted on July 8, 2019
15 Shares
3D Insider is ad supported and earns money from clicks and other ways.
DJI has just released the Mavic Air 2. See all of the specs here.

In the field of electronics, there are two methods in which energy can be stored: batteries and capacitors. While batteries are familiar to most of us, not many people are aware of the role that capacitors play in standard electric circuits. Although capacitors and batteries serve the same basic purpose, their unique characteristics make each one of them better suited for particular applications.

What’s the difference between capacitors and batteries, and how does each one work? Why are capacitors important, and what are their applications?

What are they and how do they work? 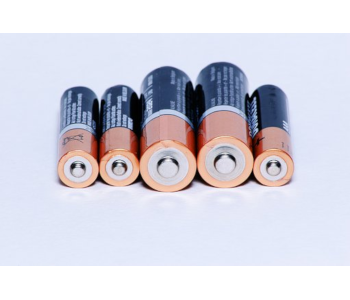 To understand how batteries work, we must first define the three major components of a battery: the cathode, the anode, and the electrolyte. The cathode acts as the battery’s positive terminal while the anode is the negative terminal. The cathode and the anode are separated by a polymer material that prevents them from coming into contact and exchanging ions directly. Instead, ions migrate from the cathode to the anode (and vice versa) through chemical reactions involving the electrolyte.

Batteries store energy through a series of reversible chemical reactions that occur between the electrolyte and the cathode and anode materials. Through the years, different batteries have been developed, typically differentiated by the types of cathode and anode materials used on each one of them. Some of the most popular ones include lead acid batteries, which are still used in most automobiles, and nickel-cadmium batteries, which were considered the standard for portable batteries.

Nowadays, most of the devices we use contain lithium-ion or lithium-polymer batteries. The anode and cathode materials of this type of battery are made of a combination of lithium and cobalt. Since both the cathode and anode materials allow electrons to move in and out freely, lithium-ion batteries have become valued for their rechargeable characteristic. 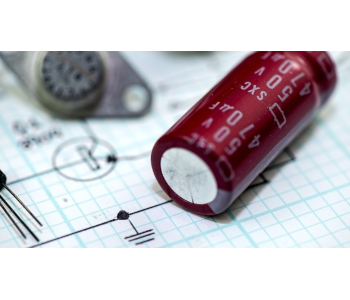 Capacitors are somewhat similar to batteries in the sense they can also store electricity and that they also have positive and negative terminals. The mechanism behind energy storage in capacitors is very different. Instead of an electrolyte, the space between the positive and negative terminals of a capacitor is filled with a “dielectric” – an insulator that stops the flow of the current between the two terminals. While the conductor plates of a capacitor are typically made of metals, the dielectric can be made of a variety of insulation materials such as glass, ceramic, or plastic.

By impeding the flow of current between the two conductive plates, a capacitor can store the energy in an electrical field. Although no current flows across the two conductors, the charge buildup on one side creates an electric field that influences the other conductor. Thus, the conductors in a capacitor develop equal charges with opposite polarity. This also means that an uncharged capacitor does not have any negative or positive terminals – it is only after charging that the polarity of a capacitor is defined.

Once a capacitor reaches its capacity to hold a charge, it impedes current flow through a circuit. This capacity, called capacitance, is expressed in the Farads unit. Just 1 Farad is already a pretty high capacitance value, so for most practical applications, capacitance is expressed as microFarads.

A capacitor discharges its stored energy when it is connected to a load, such as a lightbulb or a circuit’s microcontroller. The discharging process of a capacitor is very fast, and this burst of energy has led to many industrial applications of capacitors.

The choice of material for the capacitor’s dielectric is often dictated by its specific application. Glass is typically used for high-voltage applications, while cheap Mylar is good enough for common household applications such as clocks and digital counters. Capacitors that use air as a dielectric are also incredibly common, and are usually used for radio tuning circuits.

What are their benefits and disadvantages?

The capacity of a battery to store electrical energy may vary based on the materials used for the cathode, anode, and electrolyte. A battery can also be merely scaled up, increasing both its weight and size, for additional storage capacity. In any case, the power density of batteries is one of its most sought-after benefits. Batteries are capable of storing so much more electrical energy compared to capacitors of the same size and weight.

Batteries have another benefit that has made them the technology of choice for powering most of the small devices we use nowadays. When connected to a load, batteries produce electricity at a slower and controlled rate. This is because there is a natural latency for the conversion of chemical energy to electrical energy. This means that the voltage across a battery remains near constant throughout its cycle – it decreases over time, but at a very slow rate.

The unique characteristics of batteries have made them a better choice for portable energy storage. They are light, small, and can reliably power devices over several hours or days without a huge drop in potential difference. A battery can be readily isolated from a circuit via simple on-off switches, which helps conserve its limited energy stores.

However, the reliance of batteries on chemical storage is also the main reason behind most of its limitations. The chemical reactions that govern electron transfer between the cathode and anode are not perfect. They generate byproducts, usually gases, that cannot be re-integrated into the chemical reactions of the batteries. This means that all batteries have a limited lifespan. As a battery goes through more cycles, its capacity to hold electrical energy starts to decrease. A high volume of gases inside the battery also makes them more prone to explode, which will result in leakage of corrosive battery acids or, worse, cause a fire or an explosion.

The chemical reactions that govern the basic functions of batteries are also quite sensitive to temperature. Storing or using batteries at high temperature accelerates their deterioration. As these chemical reactions take time to complete, charging a battery to full capacity can also take time – up to several hours, in some instances. Disposal is another problem with batteries, as the chemicals and metals inside them quite toxic.

Batteries have one last benefit up their sleeves: for the same capacity storage, they are much more affordable than capacitors. The chemicals and metals that make up batteries may not exactly be cheap, but the sheer volume of batteries manufactured day in and day out have made them really cheap products. As battery technology evolves further, we can only expect batteries to become even cheaper in the following years.

Although capacitors can store electrical energy, much like batteries do, they are used in very different applications. The characteristic property of capacitors is their ability to discharge their energy stores very quickly. A very common application of this “burst” capacity is in the electronic flash of cameras. A charged capacitor can supply the very high power needed for the flash light bulb to generate a very bright light. Some laser applications also use the fast discharge capability of capacitors. For this reason, charged capacitors can be very dangerous.

A unique characteristic of capacitors that makes them particularly adept at providing high-powered bursts of electricity is that they can typically be charged in a matter of seconds. Since the dielectric material of the capacitor is hardly influenced by the stored electrical field, capacitors can withstand thousands of cycles without suffering any damage. The performance of capacitors is also not heavily influenced by temperature.

The quick discharge property of capacitors makes them a very poor choice for powering devices meant to be used for long periods. The potential difference across a capacitor drops almost instantaneously. Capacitors are also quite expensive relative to their capacity storage.

What are their applications?

The applications of batteries are so common that you can probably list down about a dozen or so right off the top of your head. Batteries are one of the primary reasons why we have technology on the go. From our laptops and cellphones to portable kitchen appliances and power tools, the development of compact and lightweight batteries have revolutionized how we use technology.

Many of the recent trends in technology have been made possible by the strides that the battery industry has taken towards improvement. In the field of portable devices, LiPo batteries remain at the forefront of this evolution. LiPo batteries are exceptionally small, lightweight, and have very high power density. This has been leveraged by many devices that benefit from this weight reduction, such as drones, hoverboards, and electric scooters.

By contrast, the applications of capacitors are not so well-known to the general public. We’ve already mentioned how the high-discharge capability of capacitors makes them appropriate for applications that require a burst of high electrical power such as flashes and lasers. This same concept is used by a technology that is more familiar to many of us – capacitive touchscreens. This type of touchscreen, used in many tablets and mobile phones nowadays, is composed of a series of small capacitors which quickly discharge once they come into contact with a human finger. By mapping the location of the discharged capacitors, the device can determine the exact point in the screen where the user is trying to interact with.

Capacitors have the unique capability of blocking current flow in a circuit once it has been fully charged. On the flip side, it can also release electrical energy once it detects an under-current. This gives capacitors an ability to act as noise filters in electrical circuits. Since they have a limited capacity, they can block an oversupply of electrical charge. If the supply goes below its normal value, a capacitor can release its electrical store to make up for the shortage.

While batteries are mainly used for direct current (DC) circuits, capacitors are essential elements of alternating current (AC) circuits. When a capacitor is fully charged, it blocks any additional current from passing through it when the current is flowing along the same polarity as the capacitor. However, a current flowing in the opposite direction will instead discharge the capacitor. This means that a current can flow back and forth through a capacitor with no issues. Using this concept, a capacitor can be used to block DC voltage without impeding voltage from an AC source.

In an audio system, capacitors are typically combined with resistors to act as filters that only allow specific frequencies to pass. This is the working principle behind low-pass and high-pass filters.

Both batteries and capacitors have huge roles to play in today’s technology. Batteries are primarily a way to bring electrical power on the go, giving way to the use of millions of portable electronic devices that we use every day. Capacitors, although a bit more subtle in their use, are just equally important circuit components that filter noise, prove quick and powerful surges of electricity, and make AC devices work.