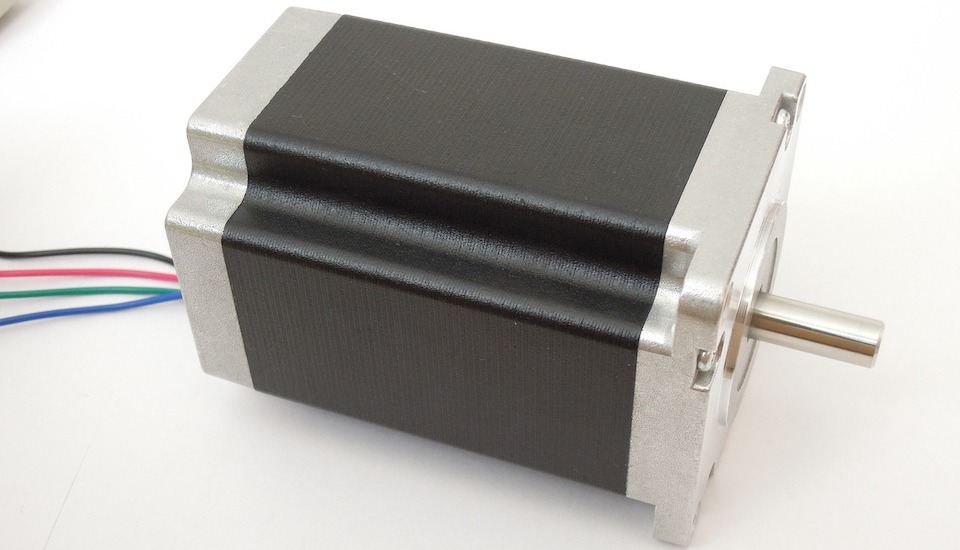 by Joseph Flynt
Posted on September 21, 2018
6 Shares
3D Insider is ad supported and earns money from clicks, commissions from sales, and other ways.

A computer numerical control (CNC) machine is an automated machine that turns a piece of raw material like metal or wood into a specific design, with the instructions coming from a computer. The machine tool head varies; it can be a drill, a plasma torch, or even a waterjet strong enough to slice metal. A CNC machine can also be used for drawing, with the tool head outfitted with a regular sharpie.

While CNC machines are typically associated with large-scale manufacturing, they can also be used on a desktop level, similar to desktop 3D printers. Obviously, a CNC machine designed for hobby use doesn’t require the kind of components used on industrial CNC machines. But even when downsized, CNC machines still rely on motors to drive the motion system. That’s where CNC stepper motors come in,

A stepper motor (also called step motor or stepping motor) is a brushless DC electric motor that offers more precision than a regular DC motor. A stepper motor breaks down a full revolution into a number of equal steps, making it suitable for machine operations in which small and precise movements are required.

There are several reasons why hobbyists prefer stepper motors over servomotors, the other type of motor often utilized in CNC machining. The most important of which is that stepper motors are much simpler in design and are easier to use, which immediately make them more appealing to people who are new to CNC machining.

You can think of servomotors as the premium option, especially considering they are generally more expensive than stepper motors, even with similar specs. In addition to the price difference, which matters a lot for many people, the fact that stepper motors are easier to get is another big reason they are more popular than servomotors among the CNC hobbyists crowd.

In regard to reliability and performance, stepper motors and servomotors don’t have a Grand Canyon-sized divide between them. Both motors offer good and reliable performance when configured correctly. But for high-performance operations, servomotors, which require an encoder, are more ideal. That’s not a knock against stepper motors; some applications simply call for servomotors.

When shopping for CNC stepper motors, you’ll notice that they come with the term “NEMA.” It stands for National Electrical Manufacturers Association, a US-based outfit that defines numerous electrical standards, one of which is for electrical enclosures. The NEMA designation of stepper motors refers to the size of the faceplate. For example, a NEMA 17 stepper motor means it has a faceplate of 1.7 x 1.7 inches.

The good thing about stepper motors is that they are widely available and easy to buy online. But before you shop online, it won’t hurt to check if a local electronics store sells them at fair prices. Shopping at a retail store gives you the chance to inspect the items as much as you like before making the purchase. That’s something you can’t do when shopping online.

When shopping for stepper motors online, there are several outlets you can go to, including Amazon and eBay. Most brand-new stepper motors come from China, a glaring red flag for a lot of people. The good news is that China-made stepper motors are dirt cheap, allowing you get a bunch of them for both immediate use and future replacements. If you do plan to buy in bulk, make sure you got the correct item; otherwise, good luck with the return process, especially if you bought at an online store with questionable business practices.

Considering you don’t get the chance to physically inspect stepper motors sold at online stores, it’s important to read the customer feedback of the product you plan to buy. You need to rely on the word of complete strangers to assess whether or not the product is the real deal. For the most part, customer reviews are reliable enough. We also recommend that you ask for advice or recommendations from other hobbyists at dedicated forums or online groups.

CNC stepper motors are available in different packages. You can get them in a pack of three or in a bundled package that also contains the stepper motor drivers – the latter of which is often labeled as a CNC kit.

While 3D printing is a different process than CNC machining, stepper motors in desktop 3D printers have the same function in that they are at the core of the motion system. In Fused Filament Fabrication (FFF), the most widely used 3D printing technology, the number of stepper motors depend on the machine configuration or mechanical arrangement.

For example, on a typical Prusa-based 3D printer, there are usually four or five stepper motors: one each for the X-axis, the Y-axis, and the extruder, and then one or two for the Z-axis. The stepper motors designated for the three axes are connected to either a leadscrew or a pulley system, with the latter offering faster print speeds. The stepper motor on the extruder is used to pull the filament from the spool and push it to the hotend, with help from small gears to bite the filament.

The majority of 3D printers on the market use either NEMA 17 stepper motors or NEMA 23 stepper motors, both of which can be easily bought at online stores. If you want to convert your CNC tool into a 3D printer in the future, you can still use the stepper motors, assuming their specs are in line with your design.