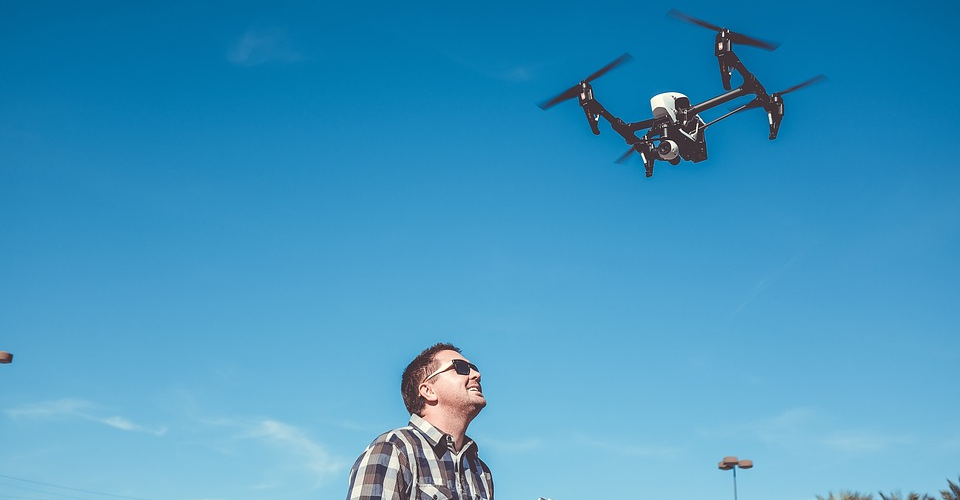 How to Get A Commercial Drone License

by Joseph Flynt
Posted on April 29, 2019
15 Shares
3D Insider is ad supported and earns money from clicks and other ways.
DJI has just released the Mavic Air 2. See all of the specs here.

We all have lofty dreams, but a drone pilot probably dreams higher than an average person. For some drone pilots, it’s enough to fly their drones for fun. For others, the hobby would be even better if they could make some extra cash out of it.

If being a commercial drone pilot sound like something you’d be interested in, then we’ve got news for you: there’s a license for that. What the license for and how do you get it?

Why do I need a commercial drone license?

Drones went through an incredible surge in popularity a few years ago. The market responded to this new demand with drone manufacturers coming out with cheaper and easier to fly drone models. The increasing number of drones flying around in national airspace prompted the FAA to impose a few rules and restrictions for drone flight.

For commercial drone pilots, the restrictions were a bit stricter and more systematic. In 2016, the FAA established Part 107 of Chapter 14 of the Code of Federal Regulations. More commonly known as “Part 107”, this set of rules provided a framework for legislation relevant to commercial drone activities. Part 107 was initially meant to provide a means of legal means for drone pilots without a Section 333 exemption to fly for commercial purposes legally. As time went on, Part 107 has started to become THE standard for commercial drone flight.

One of the provisions under Part 107 is the requirement for drone pilots to get a remote pilot certificate. More fondly known as a Part 107 drone license, this certificate is proof that the drone pilot has passed a minimum level of knowledge that allows them to fly their drones in national airspace safely. It has also been a helpful way for the FAA to maintain documentation on all commercial drone pilots.

A step-by-step guide on getting your commercial drone license

Now that we know the why, let’s tackle the how. Getting a commercial drone license isn’t complicated at all, although it does take a significant amount of time, effort, and commitment. By far, the biggest hurdle you’ll need to overcome is the Part 107 knowledge test, a 60-item multiple choice test that will test you on the basics of airspace rules and drone flight.

1. Qualify for the knowledge test

Before you even consider taking the Part 107 knowledge test, make sure that you meet the minimum qualifications:

Something we can be thankful to the FAA for is the fact that they have made an effort to make the Part 107 knowledge test accessible to everyone. To sign up for the test, you simply need to get in touch any of the almost 700 FAA-authorized testing centers located all around the country. With so many testing centers, there is bound to be one near you.

When you sign up for the test, you may need to present a valid government-issued ID and the $150 testing fee. Take note that the testing fee does not go to the FAA – it goes only to the testing center administering the knowledge test.

We might make it sound simple but taking the Part 107 knowledge test is not going to be a walk in the park. With topics such as reading sectional charts, interpreting METARs, understanding drone loading mechanics, and knowing the Part 107 restrictions by heart, what the test covers are way outside the realm of common knowledge. This means that you are going to have to hunker down and get to studying.

Fortunately, the internet is overflowing with resources that you can use to prepare for the test. There are free study guides, hundreds of sample questions, narratives from people who have taken the test, and detailed instructional videos. We recommend devoting some serious time – at least 20 hours – to studying.

In any case, we hope you’re fully prepared when your testing day comes. We have already written detailed guides on what to expect on the day of the test and what it will take to pass. Just take your time and take solace from the fact that hundreds of thousands of drone pilots have taken and passed the knowledge test before you.

After the test, it will take 48 to 72 hours before your results will be uploaded to the FAA website. It’s nerve-wracking, but we hope you make it!

4. Apply for the remote pilot certificate

Once you’ve passed the test (good job, by the way), take note of the code that comes with your test results, as you’ll be needing it later. Application for the drone license is done through the FAA’s Integrated Airman Certification and Rating Application (IACRA). Simply sign up for an account on the site and input the code from your successful test results to proceed with the application.

5. Pass a background check by the TSA

As a final roadblock in the certification process, you will need to undergo a background check by the TSA. There’s nothing for you to do here – you just have to wait. Nobody knows exactly how the TSA does the background check, or what they are looking for. All we know is that this step can take between a few days to several weeks to finish. It all probably depends on how much backlog the FAA and TSA have on pending applications.

6. Print the temporary certificate and wait for the permanent certificate

Once the TSA has vouched for you, you should receive your temporary commercial drone license by email. Although the temporary certificate is only valid for 120 days, we suggest that you still print it out and keep it with you when you go out for drone flights. During this time, your permanent certificate should be on your way to you via regular mail.

At this point, all that’s left to do is to practice your new designation as a Part 107-licensed drone pilot. In exchange for the privilege to use your drone commercially, you are expected to comply with all Part 107 rules and regulations. There are quite a lot, and you should have already read up on them when you were studying for the knowledge test.

Take note that the FAA can require a commercial drone pilot to submit their drone for inspection, along with associated records or documents. This is probably something that would only come up in a drone-related accident, so just avoid getting into, and you should be golden.

If you need a refresher, or if you have questions about the finer details of the Part 107 rules, then you can check out our detailed guide.

For how long is the license valid? Can I renew it?

The commercial drone license is valid for only two years, after which you will need to renew it to continue flying your drone commercially. Renewal, in this case, isn’t as simple as showing up and handing over your old certificate.

Take note that you will not be receiving a new certificate when you pass the test. According to the FAA, the old certificate is still good. However, we recommend having a copy of the successful recurrent test results with you, just in case.

As part of an initiative to keep national airspace safe despite the increasing number of drones, the FAA stepped in with the Part 107 rules and requirements. The laws aren’t perfect, but they have at least succeeded in imparting a level of basic flight knowledge to hundreds of thousands of commercial drone pilots. This was a vital step in bringing the level of proficiency of drone pilots closer to those of certified pilots.

The Part 107 restrictions can sometimes feel – for lack of a better word – restrictive. This is further emphasized by the fact that there are no such restrictions for recreational drone pilots. However, we believe that the requirements to get the certification are a step in the right direction. After all, education is never a bad thing.