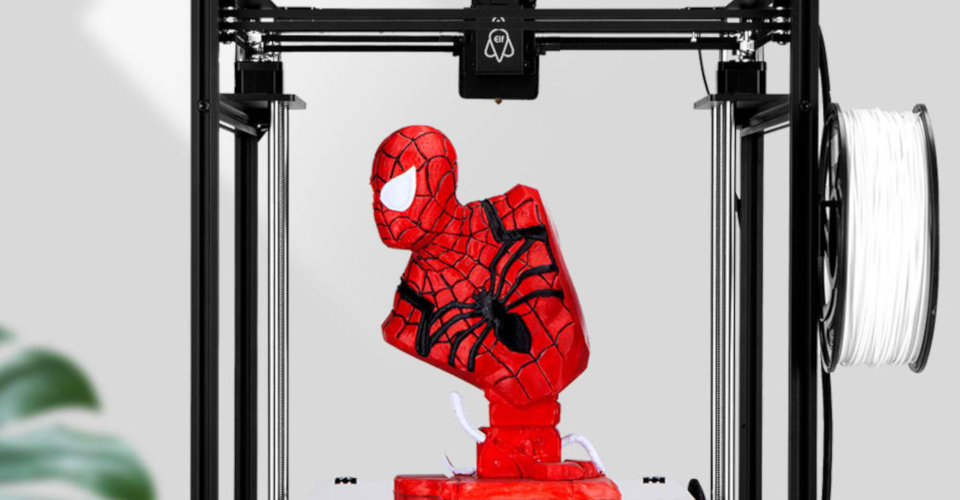 CoreXY 3D Printers – How Are They Different from Cartesian 3D Printers?

by Joseph Flynt
Posted on May 9, 2021
25 Shares
3D Insider is ad supported and earns money from clicks, commissions from sales, and other ways.

The most common type of 3D printer today and the one that most people are familiar with are Cartesian-based FDM printers. These printers extrude plastic filament through a print head that moves along the X, Y, and Z axes.

A CoreXY printer takes a more novel approach to move a print head along the Cartesian planes. Although a relatively new development, the CoreXY technology has caught the attention of 3D printer manufacturers and various members of the community. What exactly are CoreXY printers and how are they different from the standard Cartesian 3D printers? Are they any better at all?

What are CoreXY 3D printers?

One of the most distinct characteristics of the CoreXY design is that its stepper motors are stationary. They no longer move along the gantry or even as part of the print head. The design also allows for simultaneous movement along both the X and Y axes. In theory, this should allow for faster movement of the print head compared to the standard Cartesian 3D printer design.

The CoreXY is not a specific 3D printer model. It is simply a concept that can be implemented by any 3D printer manufacturer. Right now, CoreXY 3D printers are still quite rare. Although some experts have said that the CoreXY design could be the future of 3D printing, the concept is still struggling to find support from major 3D printer brands.

As with any novel idea, CoreXY 3D printers are an exercise in compromise. While it certainly has advantages over the standard Cartesian 3D printer, it is by no means a perfect replacement.

With the stepper motors located at the corners of the printer’s frame, the print head of a CoreXY printer is significantly lighter. This means that faster movement of the print head is possible without the consequence of overshooting the target destination because of residual momentum. This can help in reproducing extremely fine details in your model without having to slow down the print head movement to a crawl.

Moreover, the design of a CoreXY printer allows for simultaneous X and Y movement of the print head. This benefit in speed is one of the highlights of the CoreXY 3D printer concept. If you run a 3D printing business, this increase in throughput could easily make a CoreXY printer worth the investment.

Stepper motors are located away from heat

Stepper motors and heat aren’t exactly a good combination but are unavoidable when putting together the usual Cartesian 3D printer. With CoreXY printers, the stepper motors are located a substantial distance from any heating element.

This should make it safer to print at higher temperatures without the risk of causing damage to the stepper motors. This also makes it easier to construct a heated enclosure around the build plate without compromising heat damage to other mechanical parts.

Since the stepper motors in a CoreXY 3D printer control movement in both the X and Y directions, it does not need a complex frame and several rigid rails. This makes it possible for CoreXY printers to have a smaller footprint, both in terms of height and base width. The reduction in size isn’t huge but can be significant if you have limited space.

Putting together a 3D printer from a kit of parts isn’t unusual anymore. Perhaps the only problem with a CoreXY 3D printer is that it’s much less forgiving in terms of how its frame is constructed.

The alignment of the frame of a CoreXY printer is integral in ensuring that its belts have the proper amount of tension. This directly affects the accuracy of the movement of the printer head. Basically, a CoreXY printer demands nothing less than perfection.

Speaking of belt tension, this is another aspect of CoreXY 3D printing that needs to be absolutely perfect. As anyone who has worked with pulleys and belts before, they tend to get loose and misaligned over time. This is problematic as belts can lose tension in the middle of a print. In the case of a CoreXY 3D printer, this could instantly ruin an ongoing project.

This only means that CoreXY printers are more demanding in terms of maintenance. You will need to check the status of motors, pulleys, belts, and the lubrication of these various parts. With more moving parts involved, there are also more chances of something going wrong.

With its admittedly more complex operations and maintenance needs, most CoreXY 3D printers in use today are found in professional settings. However, the benefits of the design in terms of quality and productivity are also unquestionable.

Where to buy CoreXY 3D printers

If you’re looking to buy a CoreXY printer from a popular brand, the bad news is that there isn’t a single one right now. The closest thing we have right now is an announcement made by Prusa that they will create a “Prusa XL” CoreXY printer. However, that announcement was made back in 2019 and we are yet to see any concrete updates.

Don’t be disheartened, though, as there are still several excellent CoreXY 3D printers that are already on sale today. Although these come from less popular brands, this does not mean that the printers have poor quality. 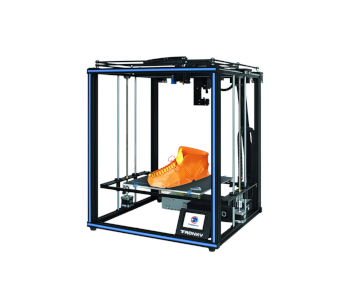 Up first is this relatively inexpensive CoreXY printer from the TRONYX brand. The X5SA printer has a build volume of 330 x 330 x 400 mm. and a total size of 580 x 645 x 660 mm. The kit comes with all the components you will need including a 3.5-inch touchscreen interface, an auto-leveler, and a filament run-out detector. Those are some fairly nice features typically found only in high-end models.

As expected, there is substantial assembly needed before this printer can be used. TRONYX is straightforward with this fact – they do not recommend this 3D printer for beginners. If you’re the type who enjoys troubleshooting and constant tinkering, then this could be a good 3D printer for you. If you want convenience, then you’re better off with something less finicky. 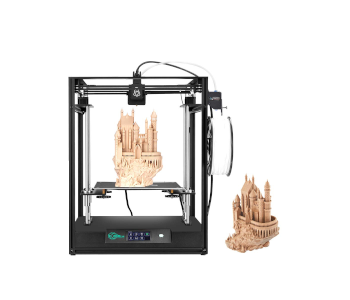 This slightly higher-end and more expensive CoreXY 3D printer has a comparable build volume with the TRONYX X5SA but has a much smaller footprint. The main advantage of this printer is that its movable build plate is mounted on dual rails for better stability and accuracy. This design perfectly complements the high-precision CoreXY print head movement.

This printer’s quality-of-life features include an auto-resume function and a filament run-out detector. The hidden power supply makes for a more streamlined and professional appearance.

Customer feedback on the Creativity CoreXY 3D printer is more encouraging, as it seems that this printer is a little easier to put together and use. Whether this is worth the slightly premium price is entirely up to you. 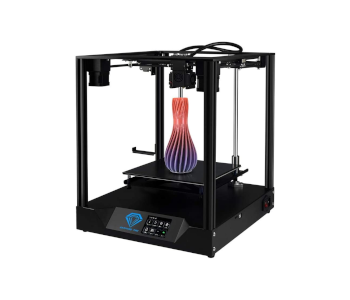 Our last entry is the Sapphire Pro, the flagship CoreXY 3D printer from the Twotrees brand. Despite the premium price, the Sapphire Pro has a much small build volume compared to the other two entries on this list. Unique features include a double ring cooling fan and a two-wheel extruder for more uniform and accurate extrusion.

The printer comes with a heated bed, making it compatible with more difficult filaments like ABS and Nylon. Adding more value to the bundle is an included spool of filament, although this weighs only 200 grams.

Disappointingly for such an expensive printer is the fact that the build platform is supported by rails only on one side. While this isn’t a deal-breaker, we would have preferred a double-rail design for extra stability.

Unfortunately, this seems like a 3D printer geared towards seasoned DIY enthusiasts. It cannot be described as an “out of the box” product as you will probably need other accessories and software before you can get it to work. The silver lining is that there is a fairly active community of users of this printer full of people who will be more than eager to help.

CoreXY 3D printers have been around for a couple of years and have often been described as the future of 3D printer design. As is apparent now, that might not be a realistic prediction.

What is more likely to happen is that CoreXY will exist alongside standard Cartesian 3D printers as an option for those who need something faster and more precise. It’s unlikely that CoreXY 3D printers will ever be truly beginner-friendly – it’s just too mechanically complex.