The Creality CR-10 Smart 3D Printer – Is It Smart Enough?

by Joseph Flynt
Posted on June 27, 2022
23 Shares
3D Insider is ad supported and earns money from clicks, commissions from sales, and other ways.

In recent months, there has been a trend of 3D printers being designed around “smart” features. This isn’t really a surprise, seeing how we have smart versions of practically every electrical device used in everyday life.

The Creatily CR-10 Smart is one of the printers that are seemingly riding this trend. With its cloud-based features, the CR-10 Smart is taking the CR-10 series of 3D printers in a completely new direction. Is the CR-10 worthy of being called a smart 3D printer? Are its smart features enough to make it stand out in the rush of new and innovative printers? 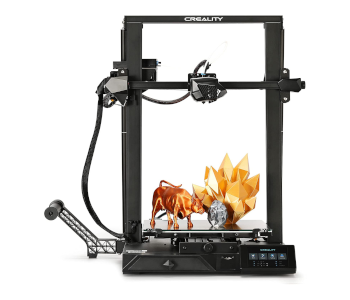 The Creality CR-10 Smart is a standard FDM printer with a rather large build volume of 300 x 300 x 400 mm., typical of the CR-10 series. It requires a bit of assembly before use. Assembly highlights one of the newer features of the CR-10 Smart – dual Z braces on the back of the printer that reduce Z wobbling while the printer is running.

The whole 3D printer comes at a beefy footprint of 578 x 522 x 648 millimeters. It’s huge, and you will certainly want to plan where exactly to place it in your workshop.

As with most 3D printers in this price range, the CR-10 Smart comes with auto bed leveling (ABL) feature, paired with a fixed print bed. This feature relies on a strain sensor connected to the nozzle.

When you start the bed leveling mode, the nozzle will come in contact with the print bed at 16 different points. For each point, three high-precision measurements are taken. The process is quite slow but gets good results. Despite any criticisms, there is no doubt that an ABL feature is a great quality-of-life feature for any 3D printer.

Another of the standout features of the CR-10 Smart is its redesigned hot end. From the surface, the fins of the heatsink look markedly different and seem to promote better heat dissipation. Based on tests, the improvement isn’t just superficial – the new heat break actually does result in better hot end performance.

The hot end also comes with a 4010-radial fan for part cooling. Airflow from the fan is directed to the part through a duct that seems smaller than ideal. This could be problematic if you’re printing at high temperatures and high speeds. The precision of small details might also be limited, particularly for miniatures.

The CR-10 Smart comes with an aluminum print bed and a removable tempered glass print surface. The glass bed has two sides – one smooth and one textured. The textured side theoretically should provide a better surface for bed adhesion. This does not necessarily mean that you will no longer need any bed adhesion, especially for the more difficult filaments. 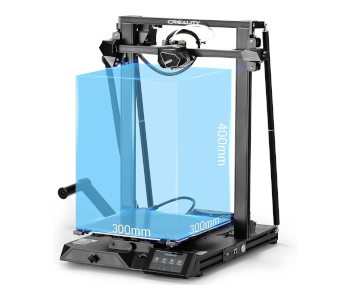 The CR-10 Smart has a couple of smaller features that are worth mentioning. At the front of the printer is a small drawer for storing the tools that come with the printer. The gantries in both the X and Y axes have a knob adjuster for the adjustment of belt tension. The printer also has a feature that automatically turns it off after a printing job has been completed, and this option can be easily accessed via the LCD interface.

In case of a power outage, the CR-10 Smart has a power recovery feature that can help resume a project where it was interrupted. It also has a filament runout sensor – something that has become a standard for many of the recently released 3D printers. Lastly, the Z-axis bracket comes with a small LED strip that makes it easier to see the progress of a 3D printing project while it is still running. This last feature is a nice complement to the printer’s compatibility with monitoring cameras.

Theoretically, the smart features of the CR-10 Smart should be part of its highlights. Unfortunately, the CR-10 Smart does not exactly live up to the expectations that have been set by its name.

The CR-10 Smart can be connected to the local Wi-Fi network and paired to your smartphone via the Creality Cloud app. This opens up a couple of possibilities for controlling the printer using your phone, including control of the heater and cooling fan.

Through the app, you can also browse for pre-sliced models in Creality Cloud and send them directly to the printer. This is convenient, although you have no means of checking the G-Code prior to starting the printing process. It is also questionable whether anyone would want to start a printing job remotely, considering how easily a print job can go wrong in the first layer.

The CR-10 Smart also has a USB port that is meant to connect a webcam for remote monitoring. While this is a nice provision, the printer only works with proprietary Creality brand webcams. This is a bit disappointing considering how common third-party cameras for 3D printers are nowadays.

While the hardware of the CR-10 Smart is close enough to be excellent, just about all of its issues can be traced to poorly implemented firmware. These flaws often translate to slow performance – the bed calibration process, filament flow, and bed and nozzle heat-up are all uncomfortably slower than expected. Poor temperature control can also result in poor retraction, poor bed adhesion, and several other quality-related issues.

Initial tests done on the CR-10 Smart have even revealed that its ABL feature does not perfectly maintain the nozzle at a set distance away from the print bed. This is certainly problematic because the CR-10 Smart no longer contains a provision for doing a manual bed level calibration. This is likely one of the more serious flaws of this 3D printer, and one that we hope has already been addressed by Creality.

The good thing about flaws based on firmware is that they can be more easily remedied, even months after the initial release of the printer. There’s also the option of making changes to the firmware yourself, especially if you want to use third-party accessories with the CR-10 Smart. It may be a small consolation to have to wait for firmware improvements, but it just emphasizes that firmware issues may not necessarily be a non-negotiable for this product.

The Creality CR-10 Smart retails for about $499. This is actually a pretty good price for a 3D printer that has a large build volume, ABL, and the excellent build quality of the CR-10 series. It is a little over the usual price of entry-level 3D printers, but the CR-10 Smart is easy enough to set up even for beginners.

Creality has fumbled the CR-10 Smart by packaging this printer as a “smart” 3D printer. The implementation of the smart features IS a bit underwhelming, considering how it’s mainly based on printing G-Code from a cloud-based server. It’s also hard to imagine many people being comfortable with the idea of starting a 3D printing project without them being physically in the same room – keeping a close eye on the first layer is practically standard practice in this industry.

However, fans of the hardware of the CR-10 series should be quite satisfied with this printer. On the merit of the hardware alone, the CR-10 Smart is certainly worth the price. The dual Z-axis brackets, redesigned heat sink, tool drawer, and tempered glass bed are all nice touches that help in improving output quality from the printer.