Desktop 3D Printers Can Pay For Themselves In Under Year, Study Finds

by Joseph Flynt
Posted on August 1, 2013
25 Shares
3D Insider is ad supported and earns money from clicks, commissions from sales, and other ways. 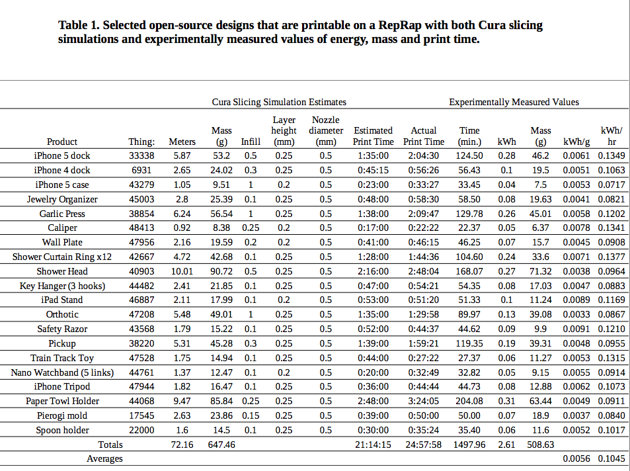 Laying down cash for a 3D printer can be a difficult task, especially if you are a first time buyer. So if you have been wondering whether a 3D printer is a sound financial decision, researchers might have just answered that question for you. They concluded that a desktop 3D printer can pay for themselves in under a year.

Michigan’s Technological University conducted the study and came up with a list of 20 household items, including; iPhone cases, shower curtain ring’s, train toys and an assortment of other household items. Joshua Pearce from the Technological University and his team used Thingiverse to find the 3D printable items and then used Google Shopping to calculate the maximum and minimum cost of buying them online (shipping was not included). They then worked out the cost of 3D printing each item on a standard desktop 3D printer.

Overall the results of the study are pretty flabbergasting: the total cost of the purchased items worked out to be between $312 to $1940, while the 3D printer could produce them for a mere $18. This figure obviously doesn’t include the cost of buying the 3D printer and as we have found with our Solidoodle 3, there are always additional costs that you don’t expect. But still, 3D printers have been shown to be able to pay themselves off in under a year and in some cases in just a few months.

“With the exponential growth of free designs and expansion of 3D printing, we are creating enormous potential wealth for everyone… [Y]ou don’t need to be an engineer or a professional technician to set up a 3D printer. Some can be set up in under half an hour, and even the RepRap can be built in a weekend by a reasonably handy do-it-yourselfer.” Pearce said.

Despite the massive savings, we still think that some of the objects they chose were slightly strange. Why did they feel the need to include an iPhone 5 and iPhone 4 dock? Maybe because it represents the massive number of people who have those smartphones. The shower curtain ring’s definitely make sense because without a doubt, they will eventually break and will need to be replaced.

There’s still one more point that hasn’t been covered and that is time. 3D printing requires a vast investment of your time and effort in downloading files, manipulating them, and finally seeing if they actually work. Even though 3D printing has a number of drawbacks at the moment, this study goes to show how much the technology has moved forward in the past couple of years and 3D printers might find themselves in the majority of average households in the next decade.

Watch the video below to get some tips for building a 3D printer.