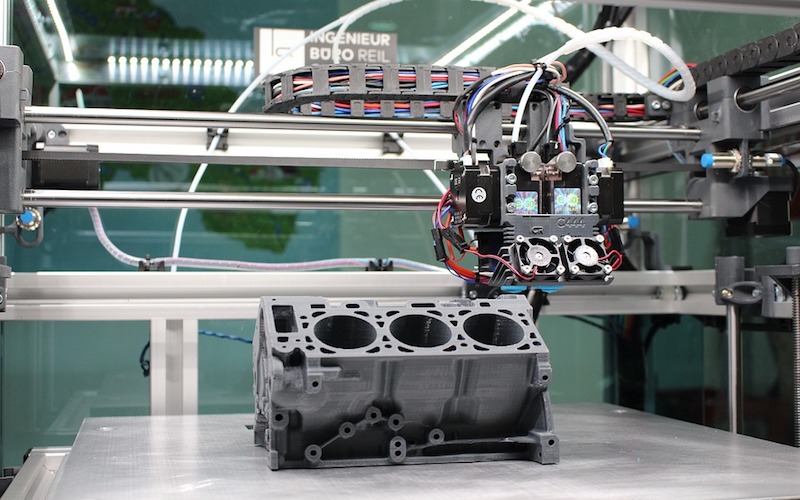 Extruders 101: What is the Difference between Direct Extruders and Bowden Extruders?

by Joseph Flynt
Posted on June 29, 2018
25 Shares
3D Insider is ad supported and earns money from clicks, commissions from sales, and other ways.

The magic that 3D printers do is quite simply the result of a carefully coordinated series of steps. From using a tightly wound coil of an engineered filament material to a perfectly leveled printing bed set at the appropriate temperature, every step of the 3D printing process is tweaked and adjusted to achieve the best results. A part of the 3D printer that is responsible for one of these crucial steps is the extruder, which delivers the filament to the hot end. In this article, we describe in detail how an extruder works, the difference between the two most common types of extruders, and a guide to choosing which extruder you should use.

How does an extruder work and what does it do?

Put simply, the extruder is responsible for the delivery of the filament to the hot end, where the plastic melts and exits to the printing bed. Extruders are sometimes referred to as the “cold end” to differentiate it from the hot end. They serve a highly critical function by ensuring constant and consistent delivery of filament to the hot end. By tweaking the extruder settings, a user can control the printing speed for a particular project, avoiding common problems such as blobs or stringing. Extruders also allow 3D printers to retract the filament, which is a useful function for when the hot end has to travel across large gaps in the design.

How exactly does an extruder work? This is more easily explained by describing the functions of the 3 important components of an extruder: the motor, the drive gear, and the idler.

The motors used in practically all 3D printer extruders are NEMA 17 stepper motors. The NEMA 17 name merely refers to the 1.7” x 1.7” faceplate of the motor. Stepper motors are so-called because they convert the full rotation of a motor into a series of equal rotations of the motor shaft. Thus, stepper motors allow extruders to deliver precisely incremented amounts of filament to the hot end, ensuring a print that has consistent composition.

The rating of stepper motors may differ from one 3D printer to the next, but one type may not necessarily be better than the other. The requirements of the stepper motor for your 3D printer were probably chosen to work best with the specific extruder and printer setup.

The drive gear is what ‘grabs’ the filament and pushes it towards the hot end. The gear rotates and is driven by the stepper motor. Drive gears in 3D printers are commonly hobbed or have teeth cut into them that lets them grab onto the filament. There is some variety in the types of hobbed gears, owing to the different printer and extruder assembly types in the market today.

The third component of extruders is the idler. The idler is merely the surface to which the drive gear holds the filament material against to allow it to push the filament. As with other extruder components, different types of idlers can be found in the different 3D printers. The most common material for idlers are printed plastics, PTFE tubing, or rubber wheels. Some 3D printers even use two sets of drive gears instead of a drive gear-idler combination.

The most important objective of the drive gear and idler pair is to apply appropriate pressure to the filament, allowing it to be fed at a controlled and consistent rate to the hot end. Failure in any of these components will lead to some serious extrusion problems.

With the basics of extruders out of the way, let us now tackle one of the longest-standing debates in the field of 3D printing. How do direct extruders differ from Bowden extruders and which one is better? As you can probably tell, answering that question is quite a complicated matter.

What are the advantages and disadvantages of Direct Extruders?

The beauty of direct extruders lies in their simplicity. The short distance from extruder to hot end means that there is very little that can go wrong as the filament is conveyed towards the hot end. Maintaining a constant rate of extrusion and pressure is also much easier for the extruder. Retractions are faster and much more effective when using direct extruders.

However, the location of the extruder above the hot end means that it moves with the hot end as printing commences. The higher mass of the moving hot end gives it more momentum while in motion, making sudden changes in direction much more difficult. Thus, prints made using direct extruders may shown signs of wobbling, backlash, or overshoots. Printing faster will only further emphasize the imperfections caused by the uncontrolled movement of the hot end.

It can be said the direct extruders require less maintenance and are less prone to failure during printing. However, you might not get the best results from them if you are printing designs with intricate details. You will also have to regulate the speeds at which the hot end moves, as the added momentum will result in more imperfections in the final print.

What are the advantages and disadvantages of Bowden Extruders?

Bowden extruders are built for speed. Since the hot end is able to move around unencumbered by the weight of the extruder, it can operate with higher speeds and more precise movements. Overshoots, wobbling, and backlash will not be significant issues when printing with Bowden extruders. Bowden extruders perform exceptionally well when printing designs with very intricate details.

The main limitation of Bowden extruders lies in the distance that the filament needs to travel from extruder to the hot end. The separation of the extruder and the hot end naturally leads to some lag or hysteresis in the system. However, hysteresis problems are easily solved by making adjustments in the printing software or in the firmware of the 3D printer.

The longer filament path introduces a fair bit of ‘play’ in terms of how the filament behaves. A longer contact surface between the filament and the filament tube increases the friction that the extruder must overcome. Thus, the motor needs to exert significantly higher torque on the drive gear to convey the filament all the way to the hot end. Some 3D printer with Bowden extruders employ double drive gears to address this need.

One of the most commonly cited problems when using Bowden extruders is that they can be especially difficult to use with flexible filaments. The longer path between extruder and hot end means that there is more room for the flexible filament to compress, warp, deform, and stretch, resulting in an inconsistent extrusion rate. This can result in an array of printing problems, such as blobs, stringing, or blockages in the hot end.

When it all comes down to it, the question is: which extruder type should you use?

Direct extruders are simple to use and understand. Using a direct extruder means you will have fewer problems to deal with, and that you will not have to tweak with your printer settings too much. The setup is also less demanding for the motor, which means you can probably get away with using a motor with a lower rating.

However, prints made with direct extruders are prone to imperfections due to frame wobbling, and backlash and overshoot of the hot end assembly. The surfaces of these prints are usually riddled with ripples – a ghost effect of the uncontrolled oscillations during printing. Printing at high speeds is also out of the question when using direct extruders, as it will only further emphasize the ripple effect in the final print.

Bowden extruders allow for faster and more accurate 3D printing but require a little more technical knowledge and experience. The hysteresis or lag effect brought about by the separation of the extruder and the hot end will affect both printing and retraction. Adjustments will have to be made in the printing software or firmware to overcome this hysteresis and getting just the right setting might take some time. On top of it all, using flexible filaments with a Bowden extruder is pretty much just asking for trouble.

If you are still quite new to 3D printing and not yet familiar with how printer settings need to be adjusted to get the desired results, we suggest sticking with a model that has a direct extruder. They are very simple to operate, but you will have to make do with slow printing speeds or prints with less smooth of a finish.

On the other hand, if you feel that you are at a level where you are comfortable tweaking with the parts of your 3D printer and the corresponding software, then you may start using a Bowden extruder. This will allow you to make cleaner prints at a fraction of the time it will take if you use a direct extruder. There are even accounts of users who have successfully used flexible filaments with Bowden extruders, given that the filament goes through a fully constrained filament path.

As with most things, the choice can only be made by you based on your specific needs and your current skillset. Take things slow and educate yourself, and you will probably master the use of both types of extruders.