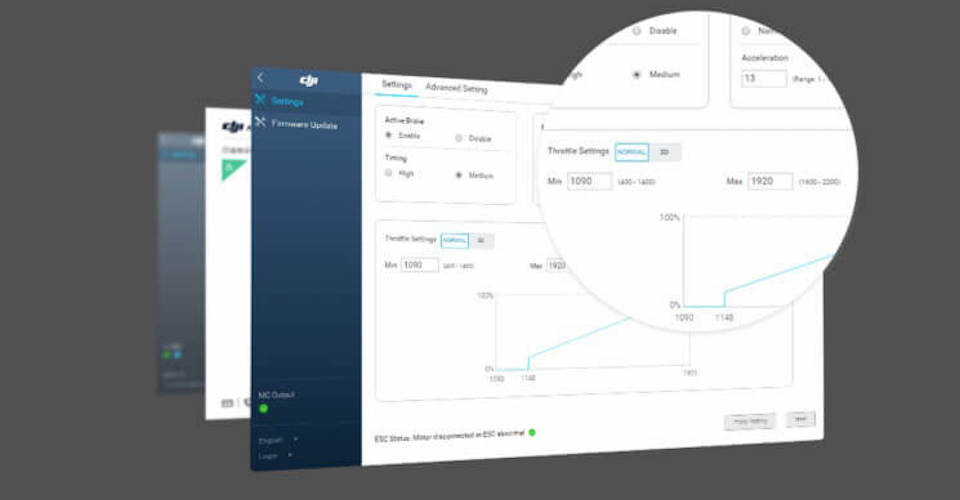 How to Fine-tune Your Drone with DJI Assistant 2

by Joseph Flynt
Posted on January 4, 2019
19 Shares
3D Insider is ad supported and earns money from clicks, commissions from sales, and other ways.

DJI is undoubtedly the number one brand when it comes to consumer and professional-level drones. Year after year, they continue to release the best drones loaded with some of the most useful and innovative features. DJI also offers a host of apps and software to support the owners of their drones. One of the most useful software, albeit unfamiliar to many, is the DJI Assistant 2. In this article we go over all the useful functions of the DJI Assistant 2, which drone models it is compatible with, and where you can download it.

What is the DJI Assistant 2?

DJI Assistant 2 is a software for your desktop or laptop that allows you to tweak with your drone’s firmware and download flight logs, among other functions. It has versions for both Windows and Mac operating systems. It is a completely different piece of software to the DJI GO app for mobile devices.

Despite its usefulness, many owners of DJI drones do not even know that this software exists. It is currently available in 3 versions. Older drones such as the Spark and Mavic Pro are compatible with the standard DJI Assistant 2, while the newer Mavic drones and the Phantom 4 series have their own special versions. There are also dedicated DJI Assistant 2 versions for the Matrice 200, MG-1S, and the DJI Battery Station.

The best thing about the DJI Assistant 2 software is that it is free to download from the DJI website. For a DJI drone owner, there really is no reason not to download and install this software.

Not all DJI drones or products are compatible with the DJI Assistant 2 software. Even if your drone was one of the compatible models, sifting through DJI’s numerous download pages can be quite a task. To make it easier for you, we have compiled a list of all compatible drones and products with links to their corresponding download pages.

To use the software with your drone, it must be tethered to your desktop or laptop computer using a micro-USB cable. Once the drone has been connected, the DJI Assistant 2 will recognize the drone and its functions will be accessible.

Many owners of DJI drones probably know that you can also update your drone’s firmware using the DJI GO mobile app. Convenient as it sounds, we still prefer upgrading firmware via the DJI Assistant 2 because it’s much faster. The DJI Assistant 2 also provides links to the release notes of the firmware so you will be better informed of what you are upgrading to.

The DJI Assistant 2 software also has versions that can upgrade the firmware of DJI’s non-drone products, such as the DJI Goggles or Battery Station.

The DJI Assistant 2 also offers the capability to download detailed flight logs onto your computer or to the DJI servers. However, flight logs downloaded via the Assistant 2 come out in .dat format and are essentially text files with a large amount of incomprehensible data. This is quite disappointing, considering that flight logs downloaded via the DJI GO mobile app are viewable using a very simple and intuitive graphical interface.

The DJI Assistant 2 does have a Flight Data Viewer module that seems to have been meant to simplify viewing of the flight data. However, it does not seem to be functioning as intended yet. There is a good workaround to this problem that involves the use of third-party websites (such as AirData) that can convert the .dat files into a more palatable format. Although it is disappointing that users need to resort to using third-party solutions, the output shows just how much data the .dat files contain – aside from position tracking, it stores data on battery temperature, battery levels, maximum altitude, and total distance travelled.

Even with the absence of a good flight data viewer, the .dat files are great for sending flight data logs to DJI for their analysis in case something goes wrong with your drone. The DJI Assistant 2 also makes this process easier with its convenient “Report Data File” button.

The versions of the DJI Assistant 2 for higher-end drones (such as the Mavic 2 series and Phantom 4 series) features more tabs in the flight log download module. This allows for discrete downloads of data specific from the drone’s navigation system, camera, or gimbal. This makes it easier to sift through data by eliminating all the unnecessary datasets.

DJI Assistant 2 also offers an option to download a Blackbox file, which also results in a complex .dat files. Similar to how a plane’s blackbox records all its pertinent data, the DJI Blackbox file probably contains much more information than what is recorded in the flight logs. This is probably not something that is designed for user analysis but is also a good method for reporting problems to DJI.

Should your drone’s vision positioning sensor malfunction for any reason, then the DJI Assistant 2 provides a convenient vision calibration process that you can do right in front of your computer. Activating the Calibration module displays a grid on the screen. You then simply hold your drone’s sensors up to the screen and follow the instructions.

The calibration process must be done twice for each sensor. For reference, the older Mavic Pro has sensors in the forward direction and at the bottom, meaning it must go through the calibration process 4 times. More advanced models, such as the Mavic 2 Pro with omnidirectional sensors, will take a longer time to calibrate.

After the calibration process, the drone must be synced with the newly calibrated settings and restarted before they can take effect.

The DJI Assistant 2 also has Simulator Lite module that allows you to fly a virtual drone in your computer screen using your remote controller. Although it’s a nice feature that allows you to fly a drone in a risk-free environment, the controller response feels a bit clunky and the simulator environment itself is rendered in low resolution. It offers a poor experience, but then again – this software is free.  You likely will not spend a lot of time flying in this DJI Assistant 2 flight simulator.

For drone pilots geared more towards professional applications, a much better alternative is the DJI Flight Simulator. Released just this November 2018, the DJI Flight Simulator features amazing visuals, a sophisticated physics engine, and industry-specific training modules. It is compatible with almost all enterprise-level DJI drones but is also compatible with popular consumer models such as the Spark and Mavic Air.

Finally, the DJI Assistant 2 allows you change the SSID name and password for drones that are WiFi-capable. This is a good move to keep the connection between your drone and smartphone more secure.

Overall, the DJI Assistant 2 is a powerful and very useful software that is a must-download for all owners of DJI drones. The software is free and has a very small size, so there is no reason to pass up on it. The software still has a few issues on usability and functions that don’t appear to work they way they were meant to be, but we are confident that DJI will get around to fixing these problems soon.