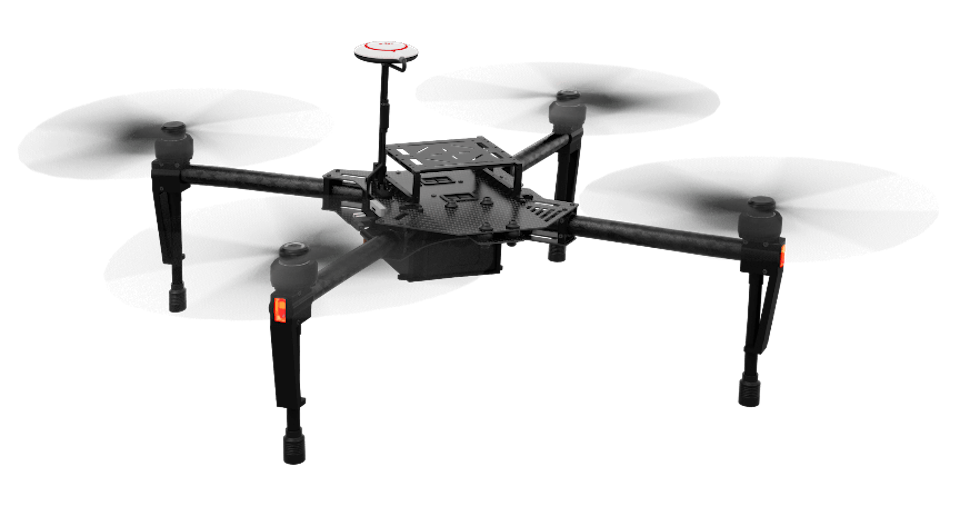 A Review of the DJI Matrice 100 Programmable Drone

by Joseph Flynt
Posted on January 9, 2019
19 Shares
3D Insider is ad supported and earns money from clicks, commissions from sales, and other ways.
DJI has just released the Mavic Air 2. See all of the specs here.

Nowadays, the commercial applications of drone technology are as varied as the types of drones flooding an already crowded market. In most cases, buying a drone for commercial purposes means committing to one or two particular applications. A camera drone is great for drone photography and some drone mapping, but it probably cannot be used for LiDAR or for multispectral imaging. This is just the nature of the industry, as market-ready drones are typically pre-equipped with all the gear and features for its intended purpose.

DJI bucks this trend with the Matrice 100: a fully customizable and programmable drone that can be used across different industries and applications. Despite being released more than 3 years ago, the Matrice 100 is still one of the most versatile drones available today. What makes the DJI Matrice 100 so special? Is it still worth buying today?

Simply put, the DJI Matrice 100 is not the kind of drone that you can fly with ease right out of the box. The kit comes with everything you need to fly – a flight controller, propellers, a battery, the drone frame, and a remote controller – but it requires a bit of assembly. This is but a preview of the massive amount of tinkering and building that you will likely do with the Matrice 100, DJI’s first fully integrated drone platform designed for a variety of industry applications.

The frame of the Matrice 100 is made of carbon fiber, making it both strong and lightweight. Slight flexibility in the rotor arms reduces vibration feedback from the motors, keeping all the other components of the drone safe from residual damage. The landing gear of the Matrice 100 also seems to be designed with the safety of its electrical components in mind, with its spring-loaded landing pads that significantly reduce impact load.

A collapsible bracket holds the GPS module, which plays a big part in the applications that the Matrice 100 was designed for. The basic kit of the Matrice 100 also includes extra mounting brackets that can be installed on top of the carbon fiber frame. These act as expansion bays for fully customizable add-ons, which we shall get into alter.

Despite its simple appearance, the Matrice 100 comes equipped with all the sophisticated flight technology that DJI has to offer. The upgraded E800 flight propulsion system gives the Matrice 100 more power during flight. This is aided by the top-of-the-line 1345s propellers and four units of the E Series 620D electronic speed controllers (ESCs). All these elements combine to make the Matrice 100 one of the more powerful DJI drones – a feature that can come into full utilization with the drone’s customizable payloads.

The Matrice 100 is also equipped with an enhanced GPS system that is capable of faster acquisition and locking of satellite signals. This is a very useful feature for commercial and industrial application such as mapping and surveying. With the upgraded GPS system, the Matrice 100 is capable of carrying out more accurate autonomous flight based on user-defined flight plans.

At the heart of the Matrice 100 is its compatibility with DJI’s software development kits (SDK). This allows users to customize the functions of the Matrice 100 drone. This same capability has also been offered for the Inspire and Phantom series.

The Matrice 100 is fully programmable using either or both of two SDKs. The Mobile App SDK is used by developer to build their own mobile apps for a variety of specific tasks and applications. Some of the well-known products of the DJI Mobile SDK are the Pix4D and DroneDeploy platforms, which are some of the most popular apps for flight planning and autonomous flight control.

The Onboard API SDK allows you to interface with the drone’s firmware and create custom flight commands. Whether it’s aerobatic maneuvers or pre-set camera positions, all of the drone’s hardware are under your full command. With the API SDK, you can control and monitor the drone using any system that is connected to the flight controller. You can even come up with custom autopilot apps that make use of any of the drone’s onboard sensors and its GPS system.

The hardware expansion bays that sits atop the frame can be used to house additional payloads, sensors, and imaging devices. This potentially makes the Matrice 100 a multi-purpose drone that can collect different types of data in a single flight. Customizable mounts can be moved and adjusted for optimum functionality and proper weight balancing.

Again, all these additional sensors and payloads can be made to function with the Matrice 100 drone using the DJI SDK platform. Multiple options for interfacing with the Matrice 100 include dual parallel CAN ports for DJI devices and dual UART ports for third-party add-ons. In contrast to ready-to-fly drones that come fully built, the Matrice 100 was specifically designed for modification by developers for very specific applications.

The Matrice 100 comes with a controller that is equipped with DJI Lightbridge technology, which gives it an increased flight range of up to 1.2 miles. The remote controller seamlessly interfaces with the DJI Pilot mobile app. A built-in holder secures your mobile device to the remote controller.

This remote controller seems to have inherited the predisposition for customization of the Matrice 100. Mapping of the buttons of the remote controller is fully customizable, allowing you to assign specific functions to each button. In addition to the physical buttons, the interface of the DJI Pilot app provides HD video streaming, GPS navigation, and displays all the relevant telemetry data.

In a surprising twist, the battery compartment of the Matrice 100 has enough room for two batteries. Although the spare batteries of the Matrice 100 are a little on the expensive side, the ability to dual-wield batteries might just be the extra boost you need should you decide to mount multiple payloads on the drone.

Without a payload and in ideal conditions, using two batteries will allow the Matrice 100 to fly up to 40 minutes. We expect this figure to go down to about 32 to 35 minutes under more realistic circumstances. In any case, this is a longer flight time compared to what most professional-grade drones can offer.

The Matrice 100 can be upgraded with the DJI Guidance, an add-on that provides omni-directional obstacle avoidance technology. Mounted on top of the frame, DJI Guidance is a highly sophisticated module that combines a core processor and an array of visual and electronic sensors. The data collected by these sensors is processed by an advanced computer vision algorithm, commanding the drone to make the necessary reactions.

The DJI Guidance gives the Matrice 100 a very high level of situational awareness. At the time of the release of the Matrice, there was no other commercial drone that was offering anything resembling this feature.

The onboard sensors of the DJI Guidance can also be accessed using the DJI SDK. Custom apps can be developed using data collected by the additional sensors, effectively making the DJI Guidance a secondary means of navigation. The sensors can even be used specific commercial applications such as building inspection or aerial imaging. With an effective range of up to 65 feet, the DJI Guidance upgrade greatly augments the capabilities of the Matrice 100.

Despite being a little long in the tooth, the DJI Matrice 100 has seemingly not depreciated in value. At more than $3000, the price of the Matrice 100 is still well out of range of casual drone pilots. Not that it matters – clearly, the Matrice 100 was designed for enterprise-level users with custom development needs. With its unique customization options, the Matrice 100 offers compelling value despite its price tag. Although it comes ready to fly, the full potential of the Matrice 100 is only realized by exploring the various possibilities offered by interchangeable payloads and customized flight apps.

Of course, we would be remiss not to mention the fact that the Matrice 100 does not come with its own payload. Depending on how you intend to use the Matrice 100, you may need to purchase a payload that can cost between several hundred to a few thousand dollars. For the massive amount you need to spend, you really need to decide early on what your objectives are as a commercial drone pilot.

Perhaps the Matrice 100 becomes a practical purchase in the context of the DJI Matrice 200, which costs almost twice as much.

The Matrice 100 might be one of the most expensive enterprise-level drones, but it is a futureproof product that can be modified and customized in an almost endless number of ways. It is a great drone for owner who like to go ‘under the hood’ and really explore the inner workings of a drone. As an enterprise platform, it offers a lot of option for third-party customization.

Overall, the Matrice 100 offers good value for professional drone operators who need a flexible and customizable drone platform. Although developing your own mobile apps and modifying the drone’s API requires some degree of technical experience, the Matrice 100 makes it so you will not need to build a platform from scratch.