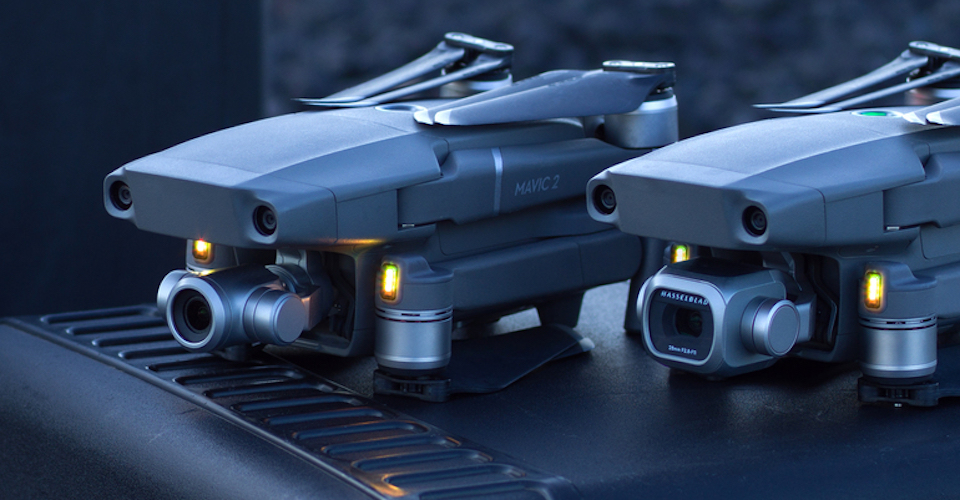 DJI Mavic 2 Pro vs Zoom: Which One Should You Get?

by Joseph Flynt
Posted on January 7, 2019
23 Shares
3D Insider is ad supported and earns money from clicks, commissions from sales, and other ways.
DJI has just released the Mavic Air 2. See all of the specs here.

Despite the strong competitors that have started to come up, DJI remains the brand to beat in the field of consumer and professional drones. They have consistently managed to stay ahead of the curve in terms of innovative drone design and features. Even as other brands develop their own “Mavic Killers” or “Phantom Killers”, DJI continues to be standard by which all other drones are measured.

In late 2018, DJI released the 2nd generation of their Mavic series of ultra-portable drones. The Mavic 2 Pro and Mavic 2 Zoom drones gained instant popularity the moment they were announced and for very good reasons: they offered features that no other ultra-portable drone had at the time. However, they are also expensive drones, forcing most buyers to pick one over the other. If you have found yourself in the same situation, then this article will help you decide as look at the strengths of both the Mavic 2 Pro and Mavic 2 Zoom. 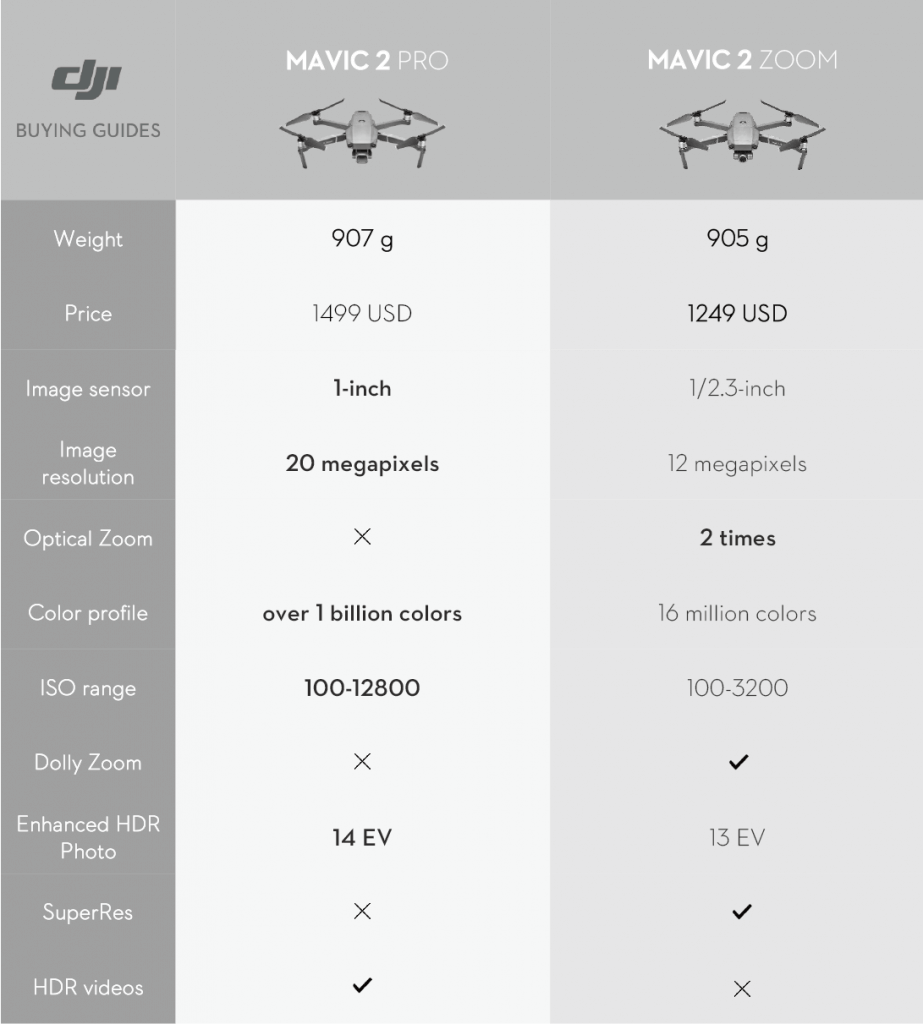 What features are the same?

True to the DJI brand, the Mavic 2 drones are built to last. Durability is a department where DJI almost never fails to deliver, so it comes as no surprise that both the Mavic 2 Pro and Mavic 2 Zoom feel robust and solid. The build of the Mavic 2 drones is not much different from the original Mavic Pro, which has endured the test of time (and several crashes).

With one of the most advanced obstacle avoidance technologies available, you can fly the Mavic 2 drones with unparalleled confidence and vigor. The built-in software will warn you if there’s an upcoming obstacle, but the drone will automatically stop anyway to avoid a crash.

The Mavic 2 drones feature the improvements in propeller design and electronic speed controller (ESCs) that were introduced with the Mavic Pro Platinum. Taking forward this update allows the Mavic 2 drones to fly up to 31 minutes on a single battery cycle, despite using virtually the same batteries as the original Mavic Pro.

The speed of a drone is determined by an interplay of several factors such as motor power, aerodynamics, drone weight, and propeller design. The Mavic 2 drones seems to have managed to hit the sweet spot and top at around 44 mph – the fastest of all the Mavic drones. This isn’t really saying much, considering that the original Mavic Pro had a top speed of 40 mph.

All the Mavic drones are equipped with 3-axis gimbal stabilization, but the Mavic 2 drones hold the slight edge by having the widest panning range. By allowing movement from -75 to 75 degrees, the Mavic 2 drones provide the widest range of camera movement. This is a feature that professional drone photographers and filmmakers will surely appreciate.

Without getting into the specifics of the cameras in each model, both the Mavic 2 Pro and Mavic 2 Zoom models have photo features that are useful in capturing images in challenging conditions. The first feature is D-HDR, a variant of high dynamic range imaging. In this mode, an image is composed by combining a burst of seven raw photos using 13 to 14 stops of dynamic range. The result is an image that is devoid of motion blur and other artifacts that show up in a typical photograph.

The second feature that is common to the two drones is Hyperlight, which uses a similar technique as HDR to reduce image noise in photos taken at low light.

The only distinguishing factor between the two Mavic drones is their camera: while the Mavic 2 Pro features a Hasselblad camera with a 1-inch sensor, the Mavic 2 Zoom is equipped with a 24mm to 48 mm zoom lens. Physically, the Mavic 2 Zoom has a typical round lens while the larger sensor of the Mavic 2 Pro is housed inside a rectangular enclosure. Either camera is equally impressive, able to capture 4K video and slow-motion capabilities that can capture 1080p video at 120 fps.

To better understand the inner workings of the camera in each variant of the Mavic 2, we highlight the strengths of each model.

The fact that the Mavic 2 Pro is equipped with a Hasselblad camera is kind of a big deal, considering the reputation of the Hasselblad brand as being the camera of choice of NASA and a lot of famous photographers. The Mavic 2 Pro is the first drone developed by DJI which fully integrates Hasselblad technology.

How good is the Hasselblad camera, exactly? It is a top-of-the-line camera with a 1-inch CMOS sensor, allowing it to capture super sharp 20MP stills. The mere inclusion of the Hasselblad camera automatically makes the Mavic 2 Pro one of the very best camera drones in the market, which is especially impressive given its ultra-portable design.

One of the best features of the Hasselblad camera is the 10-bit Dlog-M color profile which allows you to capture photos and videos with more accurate color reproduction and higher dynamic range. Getting the most out of Dlog-M footage may require some color correction in post-processing, but the result is footage with richer and more natural colors.

The lack of optical zoom capability is not a total loss for the Mavic 2 Pro. The 20MP sensor allows you to shoot videos in 4K crop mode, which results in about 1.4X lossless zoom. This is possible because the resolution in 4K crop mode is the same as the resolution at standard 4K recording mode. With a narrow field of view, you can put more focus on subjects and compose more interesting photographs.

The main feature of the Mavic 2 Zoom is its 24mm to 48mm lens that provides up to 2x zoom. This is further augmented by 2x digital zoom at 1080p, allowing you to get up to 4x zoom in total or a 96-mm equivalent field of view. In fact, the Mavic 2 Zoom is the first drone from DJI to have a zoom lens and is the only consumer-level drone that can shoot 4K video with optical zoom.

Having a zoom lens opens up a whole new world of drone photography opportunities. You no longer have to settle with wide and broad shots and can instead focus on particular subjects without needing to fly closer. Being able to capture well-composed shots even while flying from a distance is also great for covering public events and places where you always the run the risk of being intrusive.

The Dolly Zoom is a feature that is unique to the Mavic 2 Zoom. This effect was popularized by Alfred Hitchcock and involves having the camera move away while it zooms in on a subject. The effect is a somewhat disorienting but very unique perspective shift. This technique normally takes a lot of skill if done manually by a filmmaker. With the Mavic 2 Zoom, all it takes is a few presses on the remote controller.

Another photo feature of the Mavic 2 Zoom is the ability to take 48 MP Super Resolution photos. The Mavic 2 Zoom does this by using its 24mm equivalent field of view to capture nine separate photos and patching them together. The result is a 48 MP super resolution image with 4 times the resolution of a standard photo. The extremely high resolution of these photos allows you to zoom in on any section and still see vivid details.

Since we are looking at all the advantages of the Mavic 2 Zoom, we cannot discount the fact that it about $200 cheaper than the Mavic 2 Pro. Although both drones are already in the upper price range of prosumer drones, the $200 difference probably still matters to the savvier buyers.

Which drone should you get?

Before anything else, both Mavic 2 drones deserve to be lauded as two of the best drones available today. There is no other drone that can boast a list of high-quality features as the Mavic 2 drones: an ultra-portable build, long flight times, omni-directional obstacle avoidance system, and 3-axis gimbal stabilization. Each variant of the Mavic 2 is equipped with a high-quality camera that allows it to stand head and shoulders above its other counterparts.

The Mavic 2 Pro is geared towards experienced drone photographers that put a premium on accurate color reproduction and sharpness of detail in their photos and videos. With a large sensor, the Hasselblad camera performs exceptionally well even in low light conditions. Although it does not offer optical zoom capabilities, the high resolution of the camera circumvents the lack of this feature with its 4K crop mode. Even with a price tag that is $200 higher, the price of the Mavic 2 Pro is still worth it for the drone that is considered the best ultra-portable camera drone of this generation.

When it comes to the Mavic 2 drones, it all boils down to this statement: you really can’t go wrong with either model. Once again, DJI has managed to stay ahead of the drone technology curve and the Mavic 2 drones will again set the standard for all other drone brands.