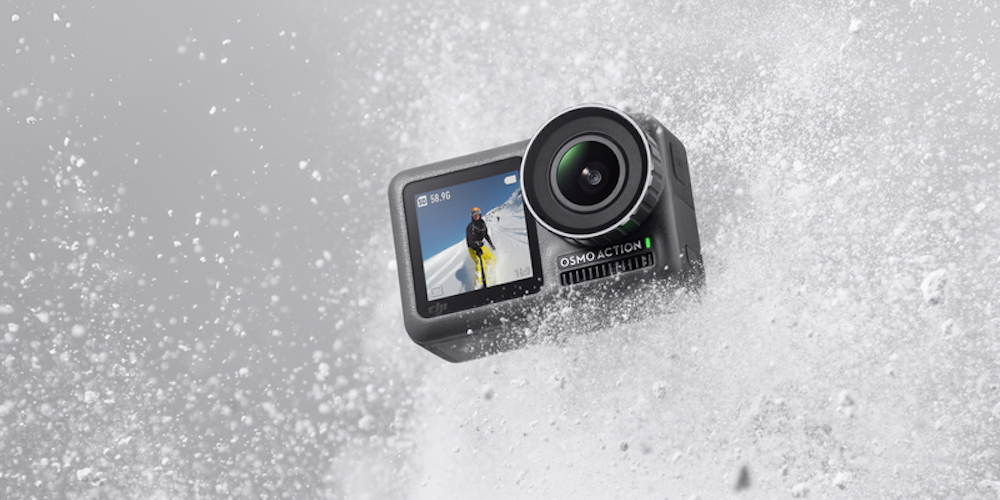 DJI Osmo Action Specs and Review: Is It A GoPro-Killer?

by Joseph Flynt
Posted on May 17, 2019
21 Shares
3D Insider is ad supported and earns money from clicks, commissions from sales, and other ways.

Up until now, the DJI Osmo line of handheld gimbals has been well-regarded for its image stabilization features but has never quite proven to be a rival to the GoPro action cameras. Last year’s Osmo Pocket stands out from the bunch with its pocket-friendly design and adaptability to an array of accessories. Although it was an excellent product for general vlogging, it lacked the ruggedness that has made the GoPro action cameras the go-to product for adventure and outdoor junkies.

With the release of the DJI Osmo Action, has DJI finally managed to come up with a product that can stand toe-to-toe with the GoPro? What does the Osmo Action bring to the table that the GoPro doesn’t?

The Osmo Action is DJI’s very own rugged action camera that looks very similar to the cameras under the GoPro Hero line. It is very small and light (only 4.4 oz.) and boasts of a similarly rugged form factor that can withstand getting submerged or dropped from a height of up to five feet. Much like the GoPro Hero, the Osmo Action was made for adventure junkies and is the perfect way to document your biking, surfing, paddling, or skateboarding affairs.

The body of the Osmo Action is made entirely of plastic, which we presume helps keep it lightweight and waterproof. Measuring 2.6 x 1.45 x 1.25 inches, the Osmo Action looks a lot like the GoPro Hero 7. In fact, the form factor is so similar that the Osmo Action is compatible with practically all GoPro accessories as long as they fit into the standard three-pronged connector. This was definitely a deliberate design choice on the part of DJI that will help GoPro owners transition to the Osmo Action.

A huge deviation of the Osmo Action from the GoPro design is the dual-screen build: a 2.5-inch touchscreen at the rear and a smaller 1.4-inch at the front. While it’s not possible for both screens at the same time – you’ll need to swap between the two – the front-facing camera is very helpful in framing your selfies. This means that you no longer need to be constantly looking down on your phone to make sure that everyone fits in your photo.

The Osmo Action has no internal storage but instead saves everything on a microSD card. Along with the multipurpose USB-C port, the microSD card slot is protected by very snug waterproof flaps.

There are a lot of ways to control the DJI Osmo Action. The very basic controls are done by three physical buttons: a power button, a record and shutter button, and a Quick Switch (QS) button for toggling between different modes.

The third way to control your Osmo Action is through the companion mobile app. Unfortunately, this may be one of the biggest disappointments in the Osmo Action. Instead of developing a dedicated app for the Osmo Action, it’s paired with the DJI Mimo which was originally used with the Osmo Pocket. All things considered, the DJI Mimo is just a clunky app characterized by poor navigation, connectivity issues, limited file transfer options, and icons that are too small. The problems of the DJI Mimo are emphasized even more compared to the GoPro mobile app, which, to be fair, has undergone years’ worth of updates. Still, it would be nice to have native editing tools and an auto-sync feature in the DJI Mimo, both of which are stables of GoPro.

Our assessment of the mobile app may sound too harsh because we still find it to be useful. Most of the controls, camera settings, and the media content stored in your Osmo Action can be accessed through the DJI Mimo app. It also allows you to use your phone as a viewfinder, in case you find the built-in screens too small.

Taking a cue from GoPro Hero, the Osmo Action can also be controlled through voice commands. To DJI’s credit, the voice controls are very responsive. However, the Osmo Action only recognizes five commands, which is a very small number compared to the GoPro. The Osmo Action has no wake-up prompt. Instead, you can just say the command, and the action camera should follow. While this gives plus points to responsiveness, we also find that it can result in frustrating false starts.

In terms of basic camera specs, there’s hardly any difference between the DJI Osmo Action and the GoPro Hero 7. They can both capture 12 MP stills, 4K video at 60 fps, and are capable of 8x (240 fps) slow motion. What sets the Osmo Action apart is the capability to capture high dynamic range (HDR) video with 4K resolution at 30 fps. Although image stabilization is deactivated in HDR, the richness and vibrancy of colors of HDR video is unparalleled.

The Osmo Action comes with an array of the usual photo and video modes. The list includes time-lapse, single shot, timed shot, burst mode, Auto Exposure Bracket (AEB) and slow-motion. You can frame your shots in either 16:9 or 4:3. The Osmo Action does not have the same variety of resolution options that the GoPro Hero 7 offers, but it does have granular and more flexible FPS settings.

If you were never a fan of the fisheye effect that you normally get with large field-of-view cameras such as the Osmo Action, then you’ll be glad to know that this DJI action camera is equipped with the “Dewarp” mode. This eliminates the fisheye at the cost of a bit of cropping, although this is hardly an issue given how wide the original field-of-view is.

There are just two glaring problems we encountered with the Osmo Action. First is the lack of an HDMI port to directly output your footage to a TV or a computer monitor. Although there’s a workaround to this problem that uses the companion mobile app, it’s a feature that GoPro owners have come to find useful and will probably miss.

The second problem comes up when taking photos or videos in brightly lit conditions. These shots tend to come out overexposed, even in the lowest ISO settings. Fortunately, the lens cover of the Osmo Action can be removed and replaced with a set of ND filters. The threaded connection for the lens cap is non-proprietary, so we expect third-party ND filters to start popping up soon.

Image stabilization technology has been the pride of DJI, and the Osmo Action does not disappoint. Its electronic image stabilization system, called “RockSteady” mode, performs beautifully in reducing camera shake. Compared to GoPro’s “HyperSmooth” feature, we’ll give the slight edge to the Osmo Action. Any bumpy footage, such as the one you capture while running or biking, will come out very smooth without losing its dynamic appeal. There is slight cropping when image stabilization is activated, but it’s not noticeable enough to be an issue.

Like the Osmo Pocket, the Osmo Action has dual internal microphones. One is located near the power button while the other is around the upper right side. Also much like the Osmo Pocket, recorded audio quality through the internal microphones is acceptable but far from impressive. Although the audio doesn’t come out distorted, it sounds flat, as if the highest and lowest frequencies have been muted. Audio quality also suffers in windy conditions, which isn’t really surprising.

In terms of social features, DJI has a lot catching up to do for the Osmo Action to be competitive with the GoPro Hero 7. Let’s start with the biggest omission: live streaming. While DJI certainly has the technology to incorporate live streaming into the Osmo Action, for some reason, it was a feature that was left out. There is also no quick-share button. Instead, you’ll need to export the videos first and basically ride along with your phone’s social sharing capabilities. This is probably just as well since the Osmo Action does not have an option to record pre-defined short clips (say, 15 or 20 seconds) which are just the perfect length for sharing.

All in all, while the Osmo Action has social sharing capabilities, DJI has not designed any feature that makes this easy for the user. Perhaps this issue could be addressed by a firmware update. We’re certainly hoping so.

One more feature that’s lacking in the Osmo Action is GPS technology. This means that you have no way to geotag your photos and videos. While this does not detract from the great features of the Osmo Camera, GoPro owners probably know how much easier it is to organize action photos when they come with GPS tags. This is particularly useful when going through photos that you took along a long trip, a bike race, or a hiking trail. Unlike the other features we would have wanted on the Osmo Action, this is one omission that cannot be solved by a firmware update.

The verdict: Is it a worthy rival to the GoPro?

The DJI Osmo Action is an excellent product as far as action cameras go. It’s suitably rugged and durable enough to withstand getting dropped or submerged in water. Unlike the handheld Osmo Pocket, the Osmo Action was made for shooting in wet or otherwise rough conditions.

Comparing the image and video quality of the Osmo Action and the GoPro Hero 7, we think that it’s pretty much a stalemate. They have similar hardware specs, and the deficiencies of the Osmo Action in terms of resolution flexibility is made up for by a granular FPS adjustment.

In terms of controls and social media sharing, GoPro Hero 7 certainly holds the advantage. GoPro included and refined these features after years of experience in the action camera industry and through feedback from their customers. While the interface and controls of the Osmo Action pale in comparison, we can see that it will be less of a problem for previous users of DJI drones and handheld gimbals.

The Osmo Action slightly edges out the GoPro Hero 7 in terms of battery life and price. With a price tag that is slightly lower than the GoPro Hero 7, it is obvious that DJI is looking to take a bite out of GoPro’s customer base. There’s a good chance of this happening, as the DJI Osmo Action has proven to be a worthy rival.

In summary, we can say that the DJI Osmo Action is a great first attempt from DJI to create their own action camera. However, GoPro has the advantage of years of experience and product development. We don’t think the Osmo Action is the product that will unseat GoPro from their position as the king of action cameras. It would be interesting to see what product GoPro comes up with for this year’s release. The competition just got interesting. Either way, we’re bound to see action cameras get better and better.