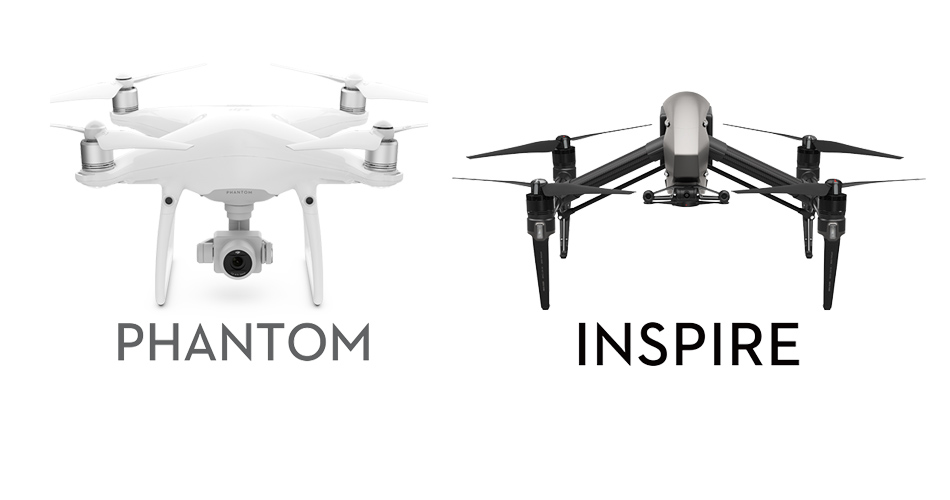 by Joseph Flynt
Posted on December 15, 2017
15 Shares
3D Insider is ad supported and earns money from clicks, commissions from sales, and other ways.

The increasing popularity of drones has seen some excellent models hit the market. But what are the differences and which one should you buy? We have put DJI’s Inspire and Phantom ranges through their paces, to bring you an in-depth comparison.

A powerful camera is an essential component of any drone. Now the key things to look for are a high megapixel rate (for taking photos) and the max frames per second (fps) for shooting video. All drones can record video at 2.7K, with many able to record at 4K, which is even higher quality.

The table below may be a bit bulky. However, it is a good way to compare the important specs for each drones’ camera.

As you can see, the Inspire 2, Phantom 4 Advanced, and Phantom 4 Pro top out with the most powerful cameras. However, we also need to mention that the Inspire 2’s camera is the only one that can film in 5.2K, making it a high-quality choice for professional photographers and filmmakers.

Start off by having a look at the large table below, as this will help you compare the key flight specifications. You will notice that all drone models (except the Phantom 3) take advantage of DJI’s Lightbridge downlink technology. This gives their controllers a range of 3.1- 4.3 miles, much further than that achieved by traditional Wifi technology.

There is quite a variance in the maximum flight time. The Phantom 4 Advanced and Pro topped out at a significant 30 minutes, while the Inspire 1 and Inspire 1 Pro lagged behind at 18 minutes and 15 minutes respectively.

Check out the top speed. The Inspire 2 maxed out at a whopping 58 mph, while the lowest speeds were those of the Phantom 3 range, coming in at 35.8mph.

Last up is the wind resistance. This is the recommended maximum wind speeds where you can fly each drone safely. Of course, many users have flown in stronger, however, performance is impaired, and the risk of a crash or flyaway is increased. The Inspire and Phantom 4 ranges have the highest resistances at 22.4mph, while the Phantom 3 range comes in at 18mph.

GPS is the navigation system used to connect to American satellites. Every drone model comes equipped with it. Now, some models also feature GLONASS. For those unaware, this is the Russian version of GPS, and having it allows connection to Russian satellites. While GPS is highly accurate, the ability to determine location by using both GPS and GLONASS results in greater accuracy.

Every drone model uses both positioning systems, expect the Phantom 3 Standard, which only uses GPS.

All drone models have forward obstacle detection sensors that make them difficult to crash. Most also include downward-facing vision sensors. The Inspire 2 also includes sensors on its top, making it ideal to fly in enclosed spaces. However, it is the Phantom 4 Pro that wins out with its side and rear sensors. You can literally fly the drone backward, side to side, and other obscure angles without inadvertently crashing into something.

When hovering in place, many factors need to be compensated for, such as wind speed and variations in the drone’s GPS position. To make it easier to hover, without horizontal and vertical displacement, DJI has equipped many of their drones with a vision positioning system. This system has precise sensors that allow drones to sense stationary objects around them, compensate for wind speed, and be able to maintain their hovering position with much greater accuracy.

All drone models come with a downwards positioning system, expect the Phantom 3 Standard. Now this system can only be used close to the ground and gives each drone a hover accuracy of:

When only using GPS positioning this hover accuracy drops to:

Each drone has a similar controller. This includes two large, sensitive control sticks, dedicated buttons for controlling flight and camera functions, as well as customizable buttons. A smartphone or tablet can be mounted to the controller for using the DJI app.

The only thing we need to point out is the Phantom 3 uses a more dated controller. This lacks the same array of buttons and has a mount that is too small for a tablet. Other than that there is no major difference between the drones controllers, as they are all based on the same design.

Each drone comes with a variety of intelligent flight modes, which include beginner, course lock, point of interest, and waypoints.

The Phantom 4 Advanced and Pro also have tripod mode (lowers input sensitivity) and draw mode (allows users to draw a path on the screen for the drone to follow).

The Inspire 2 includes a spotlight pro mode. This locks onto a subject, regardless of the drone’s flight direction, which is useful for capturing images and video.

Prices constantly fluctuate, so it is best to check Amazon to get the latest figures. Regardless, we have shown the current costs for new standalone models below.

As you can see, there is a significant price difference between the Inspire and Phantom ranges.

Which Model Is Best?

Well, its a pretty tight battle between the Inspire 2 and the Phantom 4 Pro. The Inspire 2 is definitely more suitable for professional or semi-professional filmmakers and photographers, as it has the best camera.

Now don’t forget about the price, as there is a $1,500 difference. So, is it worth it? For those filmmakers that need the highest quality footage, it just well might be. However, for the rest of us, it’s probably best to select the Phantom 4 Pro, as it still has a fantastic camera.

How About Value For Money?