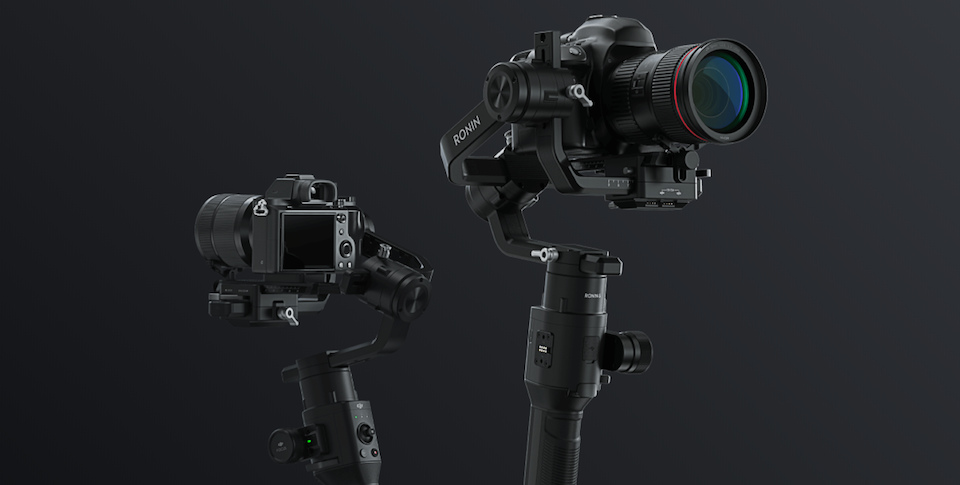 by Joseph Flynt
Posted on May 29, 2018
17 Shares
3D Insider is ad supported and earns money from clicks, commissions from sales, and other ways.
DJI has just released the Mavic Air 2. See all of the specs here.

DJI first announced the all new Ronin-S camera stabilizer a few months ago at CES in January. The company has finally started to accept pre-orders starting today for the gimbal. The units are expected to ship sometime in June depending on demand.

DJI manufacturers a ton of high-end camera stabilizing equipment for professional filmmakers. The Ronin-S is the first Ronin stabilizer from the company that can be operated with a single hand. The design is similar to the DJI Osmo Mobile 2, which is designed to stabilize smartphone footage. The main difference is that it has been drastically supped up to hold the weight of a DSLR or mirrorless camera.

The Ronin-S was designed to support the most popular camera and lens combinations, such as the Canon 1D and 5D, Panasonic GH, and Sony Alpha series. The device is designed to automatically realign based on the distribution of the weight of lens in relation to the camera.

The Ronin-S has a max speed of 75 kilometers per hour (KPH). This was tested using a Panasonic GH5 and 50mm lens. It can also hold up to 3.6 kilograms, which is a lot of weight. It also has an impressive battery life of up to 12 hours according to the company’s official specs. These specs blow the competition out of the water and will make it easier for people to find a portable camera stabilizer that actually works.

The coolest feature of the Ronin-S is the detachable handle. This allows you to attach the gimbal stabilizer to almost anything, including RC cars. This also helps with storage and it makes it easier to travel with.

DJI has allows you to use multiple accessory mounts on the Ronin-S. This allows you to add a microphone, LED lights, or even an external screen to maximize your footage.

The best part of the Ronin-S is the variety of automatic sequences such as Panorama, Motionlapse, Timelapse and Track that are incorporated. You can rotate the camera to follow a person’s moves with just the click of a button. You can also change the speed, acceleration and deadband for each axis and then save them in three profiles for easy use.

Overall, the Ronin-S is a welcome addition to the Ronin family. It’s portability in comparison to previous models is a huge plus. You can join DJI Select to get faster shipping and priority access.