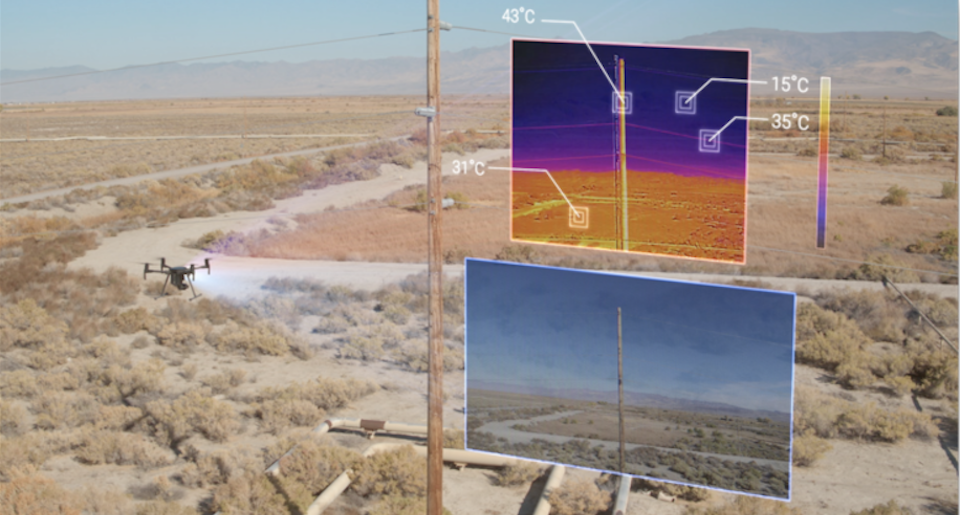 by Joseph Flynt
Posted on October 19, 2018
17 Shares
3D Insider is ad supported and earns money from clicks, commissions from sales, and other ways.
DJI has just released the Mavic Air 2. See all of the specs here.

With so many companies offering drone-based services nowadays, it can be so hard for a commercial drone pilot to be competitive. There’s always someone who is a better pilot, has a better drone, or offers the same services for a lower price. There is also the issue of market saturation; after all, the world can only handle so many drone photographers.

What’s a new commercial drone pilot to do? Find a field that is less crowded, of course. One relatively less famous field of drone services is aerial thermography, which uses a drone-mounted thermal camera to identify “hot spots” in an area, or bodies with anomalous temperature. Curious? Read on to find out more about aerial thermography, and the thermal cameras being offered by DJI.

The Zenmuse XT thermal camera is capable of a 30 Hz frame rate and a digital zoom of up to 8x. Aided by an Uncooled VOx Microbolometer thermal imager, the Zenmuse XT is capable of reading temperatures within the range of -40 F to 1022 F. With all these thermal imaging features integrated with the usual DJI technology such as a long-range and low-latency video transmission, Intelligent Flight Modes, and a gimbal with superior stabilization and a 360-degree movement rotational range, DJI and FLIR truly changed the game for thermal imaging.

The Zenmuse XT2, released March 2018, took another step up by combining the FLIR thermal camera with DJI’s 4K visual camera in a single package. This meant that the drone pilot can receive real time thermal imaging and 4K video feed at the same time. With this integration, an unprecedented amount of information was simultaneously made available to the drone pilot. This level of situational awareness may be very crucial for emergency situations, or even for routine inspection jobs.

The Zenmuse XT2 has a number of features that showcase the successful integration of FLIR’s thermal imaging technology and DJI’s intelligent drone technology. Drone pilots can combine the thermal images produced by the FLIR camera and the visual feed of the 4K camera to create a single image – a thermal image with 4K resolution. In this mode, it becomes very easy to identify the objects that correspond to thermal anomalies.

Thermal data can even be integrated into the DJI’s Intelligent Flight Modes. A mode called QuickTrack centers the camera on a selected area or subject, while a mode called HeatTrack identifies the hottest object in view and follows it. These features can be especially useful for search and rescue or surveillance operations, where the drone can follow a person’s heat signature around. Zenmuse XT2 also has a Temp Alarm feature that alerts the drone pilot should it scan an object whose temperature is beyond the critical temperature threshold.

What are the uses of a drone-mounted thermal camera?

A drone-mounted thermal camera is used in much the same way as any camera. It can take still images, record videos, and provide a live feed to the drone pilot. Thermal surveys of vast areas can also be done where multiple still images are recorded and stitched together to form a thermal anomaly map. Thermal imaging technology has been used by several industries for decades, and its integration with drone technology has presented a lot of opportunities for commercial drone pilots.

Search and rescue teams have used the ability of drones to cover areas of land quickly to look for missing people. This is especially useful if the search area is hard to access, such as in a forest. A person emits a unique heat signature that a thermal camera can instantly capture.

This application is particularly useful for places with cold weather, and where buildings are normally insulated. An inspection with a thermal camera can identify spots where internal heat escapes, which will prompt the improvement of insulation over that particular area. The potential energy savings in efficient internal heating can be huge after a drone thermal inspection.

Solar farms are huge and identifying if an individual solar panel is malfunctioning can take several days of work if done manually. A quick inspection job with a thermal camera can identify where there is unusual heat buildup, likely brought about by a panel that is not efficiently converting heat to electricity. With the quick identification of malfunctioning solar panels, a thermal camera survey ensures that minimal solar energy is wasted.

After firefighters put out a fire, whether a housefire or forest fire, they can do a quick thermal survey of the area to ensure that there are no longer any hot spots. The thing about hot spots is they could be areas where there is smoldering beneath the surface. Left alone, these smoldering areas could reignite into a full-blown fire again. With a thermal survey, firefighters can step in and put out these small flames before they become bigger problems.

When there is a failure along a power line, the incomplete transmission of electricity generates wasted energy as heat. A drone equipped with a thermal camera can very quickly fly along an entire power line to look for these high temperature anomalies. Armed with this knowledge, local power companies can step in and do repairs before the power line failure becomes a full-blown fire.

Similar to power lines, defects and failures along a communications tower generate wasted energy as heat. Manually assessing these communications tower without a drone will take too much time, not to mention it can be dangerous for the inspectors. With a drone, these defects can be identified quickly and safely.

Thermal imaging surveys of pipelines in an industrial setting can make it very easy to identify leaks along the line, especially if the pipelines are being used to transport fluid at a temperature that is distinct from the surrounding temperature. This is especially useful for fluids that are invisible to the naked eye. Left alone, pipeline leaks tend to get worse, resulting in more and more material waste for the company.

Drone-mounted thermal cameras can also be used for the surveillance of security-sensitive areas. An advantage of a thermal camera is that it can see thermal anomalies through visual obstacles, such as rain, fog, or smoke. It also does not matter if it’s day or night – thermal images will come out all the same. Drones are a faster, safer, and more efficient solution to security needs than having several human security personnel on site.

As you can see, the unique of capabilities of a thermal camera has many industrial and commercial uses. Mounting it on a drone allows for the inspection and scanning of vast areas of land quickly, or in areas where sending in human inspectors can be considered unsafe or impractical.

How do thermal cameras work?

Thermal cameras are certainly very nifty and useful, but how exactly do they work? Much like how our eyes can perceive all the colors in the visible spectrum, a thermal camera “sees” the infrared energy emitted by any object. Infrared radiation has a wavelength that is longer than light and is beyond what the human eye can see.

All objects emit some amount of infrared energy, with hotter objects emitting more than colder objects. Thermal cameras work with this very basic concept. A lens in the thermal camera concentrates the infrared light emitted by all the objects in its view. The detector elements inside the thermal camera then translate the distribution of the infrared light into a thermogram, or temperature distribution data. This data is then forwarded to the display panel, where the data is converted into colors for the user to perceive. The standard color scheme used in thermal imaging is red for hotter areas and blue for colder areas, with all other temperatures distributed along the rest of the color spectrum.

The future of aerial thermography

The field of drone-mounted thermal surveys is so new that even the term “aerial thermography” sounds unusual. However, there is no doubt that it is a field with a very high potential. The industries that require this service are usually those that pay premium rates – power companies, communications companies, solar farms, industrial fluids, and search and rescue.

If you are looking for commercial drone gigs, this is a field you might want to consider. There is a very high capital investment needed to get a high-quality thermal camera for your drone, but this is also a very small field with big-ticket demands.  This is a “big risk, big reward” situation. It might cost a fortune to start a drone business based around thermal imaging, but the returns may well be worth it.