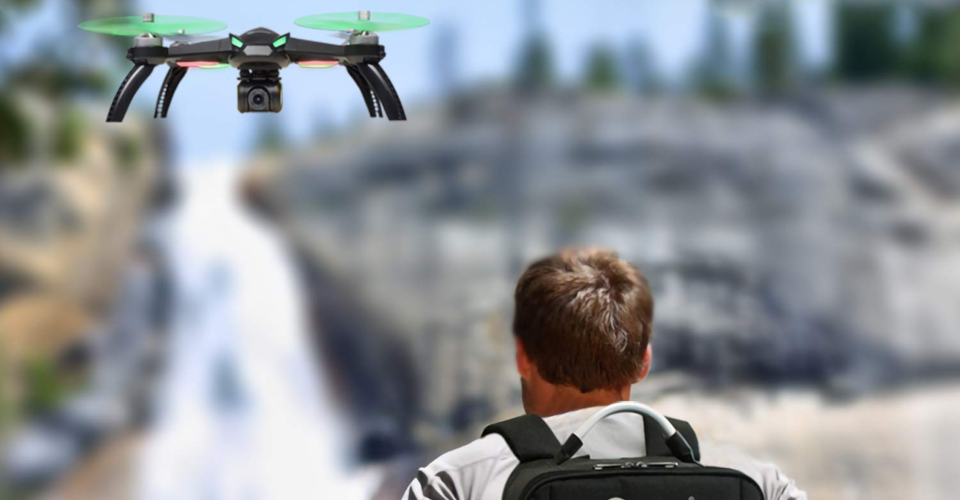 Do I Need Headless Mode for My Drone?

by Joseph Flynt
Posted on March 22, 2020
17 Shares
3D Insider is ad supported and earns money from clicks, commissions from sales, and other ways.

With the recent trend of drones having obstacle avoidance sensors that work in all directions, drones nowadays are “smarter” than they have ever been. Still, there are few features that have stood the test of time and remain fairly common in many models being sold today. One of the staple features is called the headless mode and is one of the best learning tools for beginner drone pilots.

What exactly is headless mode and how does it help in learning to fly a drone? Is it something that’s recommended for all beginner drone pilots? Which are the best drones that offer a headless mode feature?

What is headless mode?

When flying a drone in normal mode, all of its movements occur at directions relative to its “head.” This means that a drone will move left or right based on where its head is pointed to, regardless of the drone’s relative position to the drone pilot or remote controller.

This means that, when flying in normal mode, it’s possible for a drone pilot to push the analog stick forward only for the drone to end up flying closer. This constant need for orientation can be quite challenging for drone pilots who are still learning the ropes of flying a drone.

Visibility can also be a challenge in maintaining orientation. For this reason, most drones are equipped with lights that are designed to help drone pilots identify the direction of the head when flying at night. Toy drones or micro-drones can also be quite frustrating since flying them to more than 50 feet can already make it difficult to literally makes heads or tails of the drone.

Activating headless mode eliminates this particular difficulty. When flying in headless mode, all movements will be made relative to the position of the transmitter or the drone pilot. This means that banking left will make the drone move left relative to the pilot, regardless of how the drone is oriented. This makes drone flight incredibly easy, especially for beginners.

For most drones, headless mode can be activated with just a touch of a button. Manufacturers go out of their way to make the feature accessible and visible because a headless mode feature is considered a very good selling point for drones specially designed for beginners.

Benefits of having headless mode

If you’ve never flown a drone before, then flying in headless mode simply feels more intuitive. In headless mode, left is left and forward is forward, no matter where the head of your drone is pointed. If you just want to take your drone out of the box and start flying it even with zero skill level, headless mode is a “shortcut” that you will certainly appreciate.

Imagine the first time that you drone a remote-controlled car. Even though the car was stuck to the ground and can only move forward, backward, left, and right, there was still a learning curve that you had to overcome before you can say that you were any good at it. Among the challenges was keeping your brain oriented to the direction of the car, knowing which direction is forward every single time.

Now, imagine having to relearn the whole process for a drone. The challenge of keeping yourself oriented to the direction of the drone is still here, but there’s also the additional up-down range of movement that you’ll have to contend to. There’s also the fact that drones typically fly farther and can be smaller than many remote-controlled cars. Knowing which direction the front of the drone is facing to, and orienting yourself to this direction can take a bit of rewiring in your brain.

Headless mode significantly lowers the learning curve for beginner drone pilots. With headless mode activated, someone with no drone flight experience can comfortably fly a drone with just a few minutes of practice. Granted that you won’t be able to do fancy maneuvers in headless drone, but it can be a good start for someone looking to advance their drone flight skills.

Disadvantages of flying in headless mode

Learning to fly exclusively in headless mode is a very bad idea. If you want to be a better drone pilot, you will have to fly a drone in normal mode eventually because of the more refined control it provides. However, sticking with headless mode for too long may develop habits that will take time for you to unlearn.

If you are aspiring to be a professional drone pilot, it may be worth the effort to skip headless mode altogether and learn to fly in normal mode. It might be more frustrating at first, but you skip wasting time unlearning the habits that headless mode will create.

Fancy and expensive drones, particularly those designed for professional use, do not have a headless mode. At this level of skill, nobody flies in headless mode and manufacturers treat it as an unnecessary feature. If you have aspirations to fly something like the DJI Phantom Pro 4 or the DJI Inspire, then you’ll have to learn how to fly without the headless mode handicap.

Flying via FPV is certainly the most immersive way to fly a drone, not to mention one of the most fun. In FPV mode, you fly your drone using the real-time video feed from the drone’s camera. This means that you will benefit from learning how to fly your drone relative to the forward-facing camera of your drone. FPV flight and headless mode is simply a combination that doesn’t work – doing both at the same time will almost certainly result in a crash. 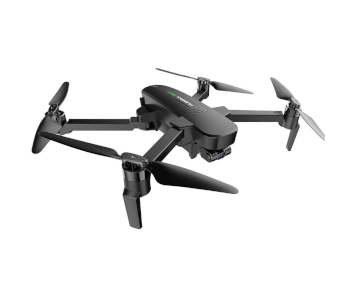 It’s rare to find a high-end drone that comes with headless mode, much less one that comes with a 4K camera and a three-axis gimbal. This makes the Hubsan Zino an exceptional drone with its combination of premium and beginner-friendly features.

The Hubsan Zino has all the trapping of a high-quality camera drone. Aside from the excellent camera and gimbal setup, it has a subject tracking feature, a couple of nice camera modes, and a provision for ND filters. The headless mode is just one of the many flight modes that this camera has to offer, making it a lot more accessible for beginner drone pilots.

Along with the premium features of the Hubsan Zino is a price tag that’s significantly higher than most other entries in this list. The Hubsan Zino is far from a toy drone and isn’t something we can recommend if you’re on a budget and just want a drone that you can fly for fun. Still, it’s hard to complain about a drone that costs less than $500 and has a 4K camera and stabilizing gimbal. 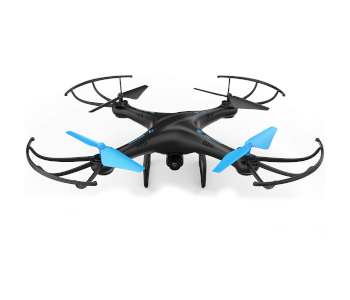 One of the most appealing things about getting a drone with a headless mode is that most of these models come for very cheap. The Blue Jay drone, for instance, costs less than $100. For such a low cost, the Blue Jay drone is an attractive option for beginners who aren’t keen on spending too much on their first drones.

Just to be clear, the Blue Jay drone is a toy drone. Despite its 720p camera, it’s certainly not the type of drone that you can use to capture anything close to professional-grade video.

To make up for its technical shortcomings, the Blue Jay was designed to be as fun and as easy to fly as possible. You can have the drone take off, land, and do stunt flips with just single button presses. Aside from the headless mode feature, the Blue Jay drone also has an altitude hold mode that makes the drone hover in place even when you have your fingers off the controls. 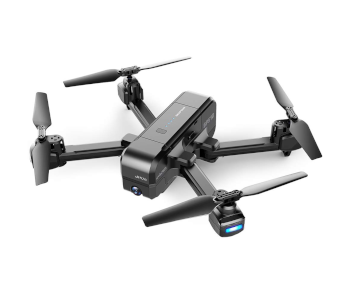 Our pick for the best value-for-money headless mode drone is the SP510 from SNAPTAIN, a popular brand of budget-friendly drones. Their latest effort, the SP510, is a drone that comes with a 2.7K HD camera, headless mode, and a foldable design for less than $200.

The SP510 has a lot of beginner-friendly features which should make flying it very easy even for those without any drone flight experience. On top of the headless mode, the drone has an Intelligent Geofence feature that limits how far it can fly away from the transmitter – perfect for doing a few hours of practice flights.

Despite being designed for beginners, the SP510 has a few tricks that could interest slightly more experienced pilots. The Point of Interest and Waypoint features are nice add-ons that we’ve come to expect out of more premium camera drones. The Follow Me mode is a similarly pleasant surprise for a drone at this price range. 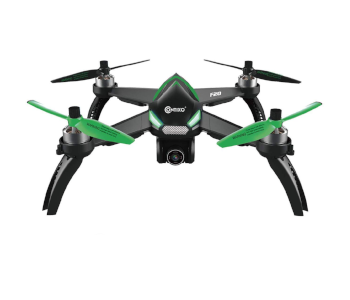 The F20 Contixo costs just about the same as the SNAPTAIN SP510, which means it’s also a very compelling option for those who want a cheap, high-quality camera drone. This is a drone that was designed for all skill levels and is also one of the more unique-looking ones in this price range.

The Contixo F20 has a 1080p Full HD camera augmented with Follow Me, Point of Interest, and Waypoints modes. Beginners can feel comfortable flying the F20 in just a few minutes with the headless mode and Altitude Hold functions. This is an incredibly lightweight and small drone, although the lack of foldable arms limits how compact it can be when packed.

The F20 makes up for the lack of foldable arms with a well-designed wheeled carrying case. The specially crafted carrying case has a cushioned compartment that lets you carry around the drone without having to disassemble the propellers again. It’s a nice little convenience which adds a ton of value to this beginner-friendly drone. 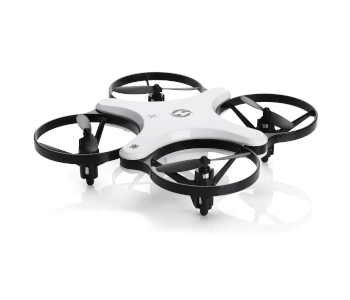 This inexpensive drone is one of the more sophisticated models out of a selection of kid-friendly drones. It also has a 720p camera, so even adults should get a kick out of capturing aerial photos and videos.

This lightweight and compact drone comes with built-in propellers guards to avoid injuries should it crash or run into people. This shouldn’t be much of a problem with the drone’s headless mode, altitude hold, one-key takeoff and landing, and emergency stop features. This drone was even designed for indoor flight, so it should be one of the safest choices for kids and beginners.

That’s not to say that the HS220 is boring. The Gravity Sensor mode is a fun little feature that lets you control the drone simply by moving around the phone connected to the controller. You can also use the mobile app to draw a custom flight path in which the drone will fly along automatically. These features go above and beyond what is typically found in a kid-friendly drone, and all for less than $100.

Instead of thinking of headless mode as a handicap, we like to treat it as more of a learning tool. Like the training wheels in bicycles, a headless mode feature is something you can use to gain a good amount of confidence in your skills as a drone pilot.

Just be aware that those training wheels need to come off eventually if you’re hoping to develop skills at a professional caliber. Relying on headless mode for too long can ultimately be harmful to your future flight proficiency.