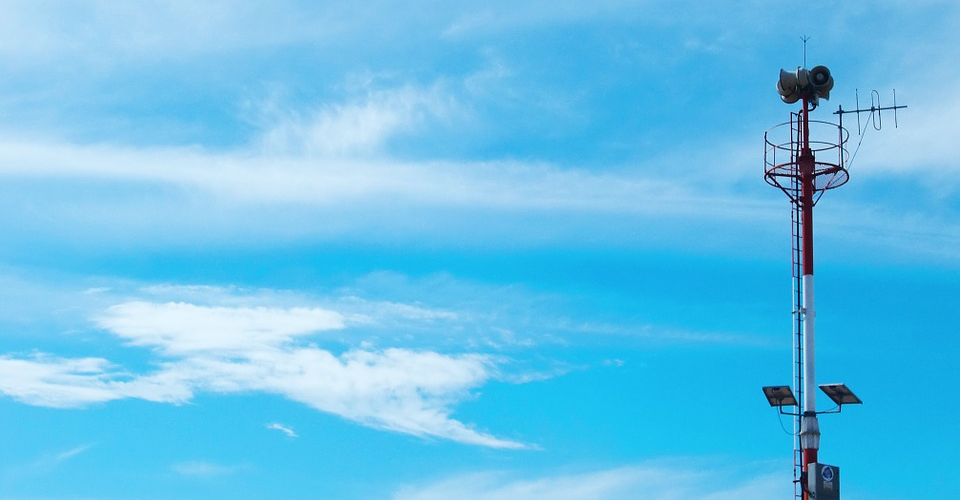 by Joseph Flynt
Posted on August 17, 2019
13 Shares
3D Insider is ad supported and earns money from clicks, commissions from sales, and other ways.
DJI has just released the Mavic Air 2. See all of the specs here.

With their number reaching several hundreds of thousands, drone pilots have now become significant elements of national airspace. The FAA is aware of this fact and has started to impose a certain level of knowledge in commercial drone pilots (and perhaps to recreational pilots as well, eventually). 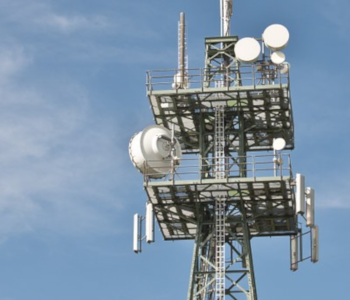 While drone pilots aren’t exactly expected to send out messages through radio communications (and are not trained to do so), they still have the option of listening in on the relevant radio frequencies so they can keep aware of the movement of any manned aircraft around them. Take note that drone pilots, whether Part 107-licensed or not, are required to yield right of way to all types of manned aircraft.

This is easier said than done, as manned aircraft can quickly come in proximity to your drone, leaving you with little time to maneuver out of the way. By tuning in to the appropriate radio frequency, you gain a heightened level of situational awareness, which allows you to better react to other elements in the national airspace system.

The radio communication standards imposed on drone pilots are based on the principles of the International Civil Aviation Organization (ICAO), an organization which has been established by the United Nations. They have the authority in the development, establishment, and administration of international civil aviation standards.

Radio communications come into play when you are flying your drone near airports of any size. However, there are also visual flight rules (VFR) that must be followed when flying in Class G or uncontrolled airspace. Communication protocols may also be in place in areas where low-level flights, such as military exercise, are expected.

Again, drone pilots are generally not expected to make radio calls. In the vicinity of an airport or in an area where low-altitude flight is expected, a drone pilot is only expected to listen in on an aviation receiver to determine the position and intention of any manned aircraft in the area. To do this properly, a drone pilot needs to know the appropriate radio frequency to tune their receivers on and to understand standard aviation language. 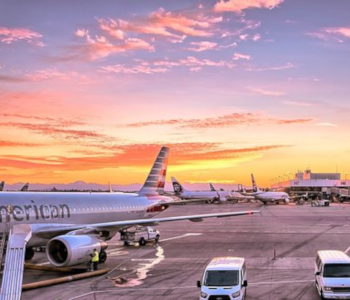 To determine the proper frequency for the area you are flying your drone in, we must first make a distinction between controlled and uncontrolled airports. Controlled airports refer to airports that have a control tower, or an air traffic control (ATC) unit, that operates 24/7. Uncontrolled airports, on the other hand, have no communications tower or has one that does not operate 24/7.

The key difference is that controlled airports issue advisories on air traffic from their communication towers via a specific radio frequency. This is far easier for both pilots of drones and manned aircraft, as the ATC is primarily responsible for directing air traffic to avoid untoward incidents.

In contrast, uncontrolled airports operate on self-announce procedures. Thus, any incoming aircraft needs to announce their position and intention – whether they’re just passing through or landing on a runway. In uncontrolled airports, pilots can pretty much navigate at their own discretion, as no authority will provide any clearance.

How will drone pilots know which radio frequency to listen to?

The old-fashioned, and still considered to be the most reliable way, to determine the appropriate radio frequency of an airport, whether controlled or uncontrolled, is to refer to sectional charts. This handy diagram from the FAA testing supplement should tell you everything you need to know when looking up an airport in a sectional chart: 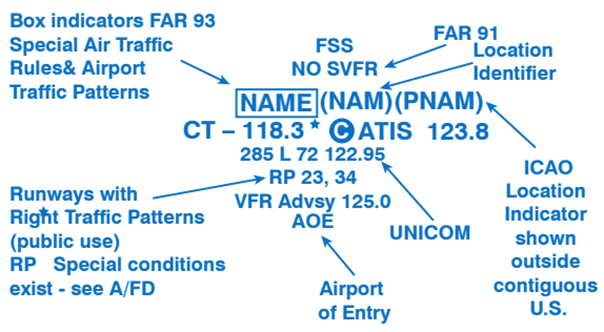 In sectional charts, each airport is labeled by this cluster of text that should tell you everything you need to know about the airport apart from its symbology. For the purpose of radio communications, we turn out focus to the numbers after the term CT, referring to the Control Tower primary frequency. The airport legend also has a dark circle with a letter C, which refers to the CTAF frequency.

However, there are also cases when the CTAF is different from the CT primary frequency. This is typically also seen in airports that don’t have 24/7 communications towers. As a drone pilot, you can try listening to the CT primary frequency to scan if the communications tower is still operational. If you are receiving no advisories, then the next best thing to do is to shift to the CTAF to receive self-announce advisories.

If you are unsure of whether the communications tower of the airport operates only from dawn to dusk, you can easily look up this information on the airport’s entry on the Airport Facility Directory, which is also a part of sectional charts.

At the far right of the legend is the ATIS frequency which, in this case, is 123.8. The ATIS refers to the Automated Terminal Information System, which is a frequency that transmits relevant information about the airport. This typically includes weather indicators (e.g., visibility, wind speed, wind direction, barometric pressure, temperature, dew point) and other information such as runway closures or changes in the tower frequencies. Pilots are encouraged to listen to the ATIS frequency first as they approach an airport.

Not all airports have an ATIS, as it is the most sophisticated example of such a system. You may encounter airports that instead have an ASOS (Automated Surface Observing System) or an AWOS (Automated Weather Observing System). The amount of information can differ across these systems. Nonetheless, listening in on these frequencies will provide highly valuable information for any remote pilot.

Nowadays, it has become much easier to search for airport information, including the proper radio frequencies, even without having to look up a sectional chart. The most popular website for this is AirNav, which also has an iPhone app version. Just about any information that you can find at a sectional chart can be looked up using the AirNav website or mobile app.

If you’d like a taste of what to expect when you listen in on radio frequencies in the field, then you can try listening in on ATC advisories from the comfort of your home. The LiveATC website allows you to listen for ATC messages for any airport in the world without having to look up for information beyond the names of the airports. You can also get a LiveATC app for both Android and iOS systems.

The most basic thing you’ll need to learn is the phonetic alphabet. This is probably something you’ve already encountered, where Alpha stands for A, Bravo stands for B, and so forth. This is a highly established practice that eliminates ambiguity during communications.

Pilots and ATC operators also call out numbers by their individual digits. For example, Runway 16 is announced as “Runway one-six.” The following is a representative list of how airmen announce number and figures over the radio.

3. Listening to a radio call

When aircraft pilots make radio calls, the standard procedure is to mention the airport name both at the beginning and end of the call. This is done so that anyone who listens in on the call can get a gist of the message, even if they miss the initial or final parts of it. For example, an aircraft that is about to land in Fitchburg Airport (an uncontrolled airport) might say “Fitchburg traffic, Tomahawk 9171A, left downwind for runway three-two, Fitchburg.”

All aircraft that have been registered in the US have a unique registration number that is prefixed with the letter N. This forms part of the callsign of an aircraft, which they announce when they make radio calls. The phonetic scheme is also used when announcing call signs. For instance, an aircraft with a call sign of N267AB will announce itself as “November-two-six-seven-Alpha-Bravo.”

However, in most cases, the N prefix is dropped in favor of the manufacturer of the aircraft or the type of aircraft. Thus, aircraft N267AB can instead announce itself as “Cessna-two-six-seven-Alpha-Bravo.”

Generally, remote pilots are not required or even discouraged from making radio calls unless it’s absolutely necessary. This is because by their very nature, drones don’t have to be announced since they are expected to give way to any types of manned aircraft.

Some Part 107 waivers, especially those granted for flight in restricted airspace, may require drone pilots to carry two-way radio communicators for emergency situations. However, unnecessary radio communication from drone pilots will only serve to the radio airwaves and interrupt more critical radio calls.

Although drone pilots have no responsibility to announce their presence and intentions over radio communications, they are still expected to have a certain degree of understanding of radio communication standards. This is a skill where practice and experience are the best teachers. If you are apprehensive about how well you can understand radio communications while out in the field, then you can try listening in to ATC frequencies from the comfort of your home.

It must be noted that listening in to radio communications while you are out flying your drone only serves as a supplement to your situational awareness. Your primary tools to ensure that you are flying safely are still what you’ve always depended on: an alert mind, and sharp eyes and ears.

After all, not every manned aircraft will announce itself before it comes within proximity of your drone. Military planes usually don’t announce themselves, while older airplanes might not even be equipped with proper radio communications technology. More than just focusing on your radio receiver, you need to keep your eyes peeled or have a visual observer – human senses are still faster and more reliable than any message sent through radio frequencies.