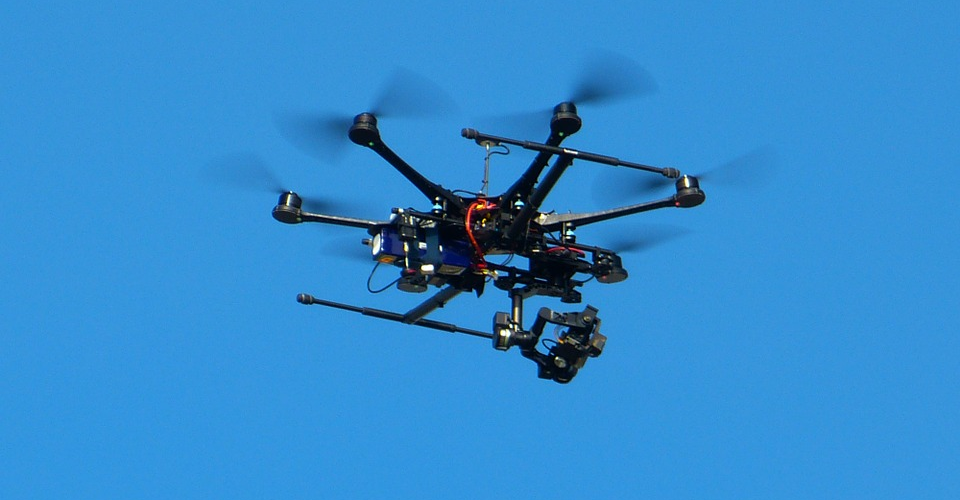 Understanding Drone Propellers: How do they work?

by Joseph Flynt
Posted on November 8, 2019
15 Shares
3D Insider is ad supported and earns money from clicks, commissions from sales, and other ways.
DJI has just released the Mavic Air 2. See all of the specs here.

For their size and weight, drones sure pack a surprising amount of technology. Each component in a drone plays a role that we might take for granted if we never look under the hood, culminating in an intricately coordinated process that makes drone flight possible.

One of the more obvious parts of a drone that plays a critical role is its propellers. Obviously, propellers help a drone fly and move around, but how exactly does it work? Why are there propellers that have different shapes and sizes? What type of propeller do you need if you want your drone to generate more lift or to have better maneuverability? 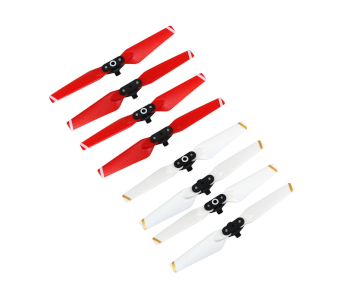 It’s easy enough to answer this question with something basic – of course, propellers make the drone fly. However, going into the concepts of wind dynamics, inertia, torque, and Newton’s third law of motion is a bit more involved.

Each propeller in a drone is connected to a motor that rotates and is powered by the drone battery. These motors can vary in how fast they rotate as controlled by the drone’s onboard flight controller. This granular control in rotation rate plays a big role in generating lift, allowing the drone to move, and keeping the drone stable.

When propellers rotate, their unique shape and curvature result in lift being generated as they push against the wind. By rotating faster, propellers can increase the lift they generate, allowing drones to fly higher or to fly with additional payload. This flight mechanism only applies to quadcopters. Fixed-wing drones rely on the flow of air above and below their wings to generate lift.

In both quadcopters and fixed-wing drones, propellers also provide propulsion. It’s easy to imagine how this works in fixed-wing drones – the propellers merely rotate to push the drone forward. The process is a bit more complicated for quadcopters. By varying the rate of rotation for each propeller, the pitch of the drone changes, and this “imbalance” allows a quadcopter to move forward and to quickly change directions.

There’s also a critical detail that you might have noticed in multirotor drones: they typically have an even number of propellers, and that their propellers rotate in different directions. This is a necessary design element that keeps the drone from rotating uncontrollably.

According to Newton’s third law of motion, each action generates an equal and opposite reaction. Applied to drones, this means that the rotation of the propellers (or motors) will tend to make the drone rotate, as well. For this reason, each propeller in a drone has to have a counterpart propeller that will rotate in the same direction.

The “brain” that coordinates these propellers is the drone’s flight controller. By regulating the speed at which each propeller rotates, the flight controller allows the drone to maintain a stable hover, gain or decrease altitude, or move in any direction that the pilot commands.

How the propeller shape affects performance

Considering how critical the role that propellers play in the flight performance of a drone, it comes as no surprise that there’s plenty of different propellers out there.

Some drones may not provide room for a lot of customization, such as those from big brands such as DJI or Parrot. However, there are drone customization kits that let you build your own drone from spare parts. The drone racing community, in particular, is very familiar with building their own drones.

If you’re deciding between different propellers, then here’s a rundown of how each characteristic translates to flight performance. 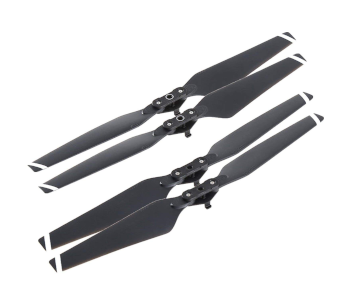 The pitch of a propeller is a measure of how far it can move through the air in a single rotation. This number is merely a theoretical indicator. In the real world, elements such as wind pressure, temperature, the weight of the drone, and the material of the propeller. Still, the pitch of the propeller is the single most useful figure you can use to predict how your drone will fly.

Selecting the pitch for your propellers is a matter of balancing between speed and efficiency. A propeller with a higher pitch will generate more thrust per rotation, giving your drone more lift and speed at the price of a higher current draw. A lower pitch, on the other hand, produces less thrust but will help you conserve your battery.

The size of a propeller, also referred to as its length, is merely the propeller’s diameter measured tip to tip. Again, this has a correlation to how much lift the propeller generates per rotation.

A larger-sized propeller has more surface area thus it can generate more lift per rotation. The opposite is true for smaller propellers. The extra lift generated by a large propeller also draws more power – similar to the compromise of a higher pitch.

One thing to keep in mind is that a larger propeller does not necessarily equate to higher flight speeds – the pitch is a much more critical parameter. 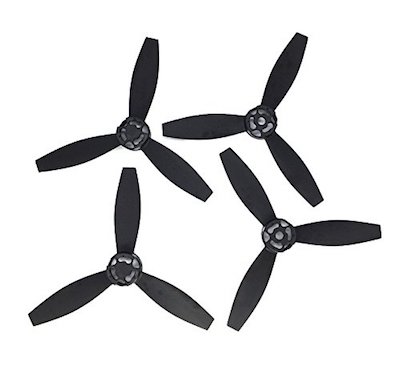 Most of the consumer-grade out of the box drones come with two-blade propellers, but it’s possible to have up to six blades. Again, the choice of the number of blades for your propeller is a question of efficiency versus performance.

Propellers with only two blades meet minimal air resistance and thus can rotate much faster with only a small current draw. However, they also don’t generate a lot of lift. Adding blades increased the lift generated for each rotation but will require a higher current draw due to increased wind resistance.

Six-blade propellers are incredibly rare because the added lift that each additional blade provides diminishes as the blades increase.

Most cheap drones have propellers made of soft and flexible plastic, but some higher-end ones may have carbon fiber propellers. The contrast here is stark: while plastic is cheap and flexible, carbon fiber is expensive and rigid. However, the more expensive option may not always be preferable.

Plastic propellers will almost certainly vibrate during flight, and this will tend to diminish the drone’s flight performance. Not only will this affect the amount of lift generated per rotation, but you may also notice some loss in stability and increased noise. However, plastic propellers can bend and flex should your drone crash, making them less prone to heavy damage.

The key difference between the two shapes is the surface area. Tapered propellers, although slightly longer, still have less surface area. They generate less lift but are significantly more efficient. Bullnose propellers have a greater surface area and are designed with more weight near the tips. This generates more lift but also requires higher torque to rotate, increasing the motor’s current draw.

Power and speed vs. control and efficiency 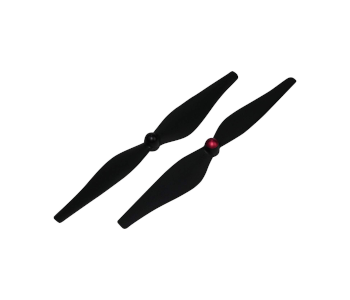 As you have noticed, the choice of which propeller to use with your drone is a matter of picking between two distinct flight characteristics. Drone racers are, of course, focused on crafting a drone that can move as fast as possible. You might also want to build a drone with as much lifting power as possible if you’re flying a drone with a large payload.

There’s also a place for propellers that prioritize control and efficiency over sheer power. If you use your drone for aerial photography, then you would probably prefer a drone that is more responsive to your commands. Drones that do mapping surveys can also benefit from the boost in efficiency of selecting the right set of propellers, especially if they don’t need to fly so fast.

Caring for your propellers

When it comes to propellers, the most important thing to keep in mind is to always have a spare set on hand. Propellers break more often than any other part of a drone, and they will inevitably break while you are in the middle of a planned flight mission.

Do you need to replace your propeller every time your drone crashes? If the cost of buying replacement propellers was not an issue, then yes, replacing them every time would be ideal. However, what’s ideal is often far from reality. Deformed propellers can be bent back to their original shape. Even propellers with small nicks can still be used for a few more sessions.

However, every time you fly your drone with less than perfect propellers, you will need to watch out for a drop in flight performance. A nicked or deformed propeller will not generate as much lift as it would if it were in perfect condition. The real danger of doing this is that your motors or ESCs may try and compensate for the decrease in thrust.

In extreme cases, your decision to use a damaged propeller may result in a burnt motor or ESC. Replacing these components is going to be much more expensive.

Our suggestion? Use a damaged propeller if you must but keep the flight time to a minimum. Just finish up what you need to do, land the drone, and switch out the propellers for a new set. Crashing your drone or damaging other drone components will cost so much more than the amount you saved because you re-used a damaged propeller.

Drone propellers are some of the most fragile, lightest, and cheapest part of your drone. This does not downplay how important a role the propellers play in flying your drone – they don’t just keep your drone airborne, but they also provide the “push” to keep them moving. As such, any drone pilot will benefit from understanding how a propeller works, as well as how the shape of the propeller affects drone flight performance.

Propeller customization isn’t for everyone, and it certainly isn’t possible for all types of drones. Drones from big brands such as DJI, Yuneec, and Parrot are only compatible with proprietary propellers that you can be bought from the manufacturers themselves.

If you’re up for experimenting with different propellers, then what you need is a drone kit: a frame where you can tack on your own flight controllers, motors, and propellers. There’s a whole community of drone customizers out there. If you’ve read through this whole article, then the knowledge on propellers will certainly help.