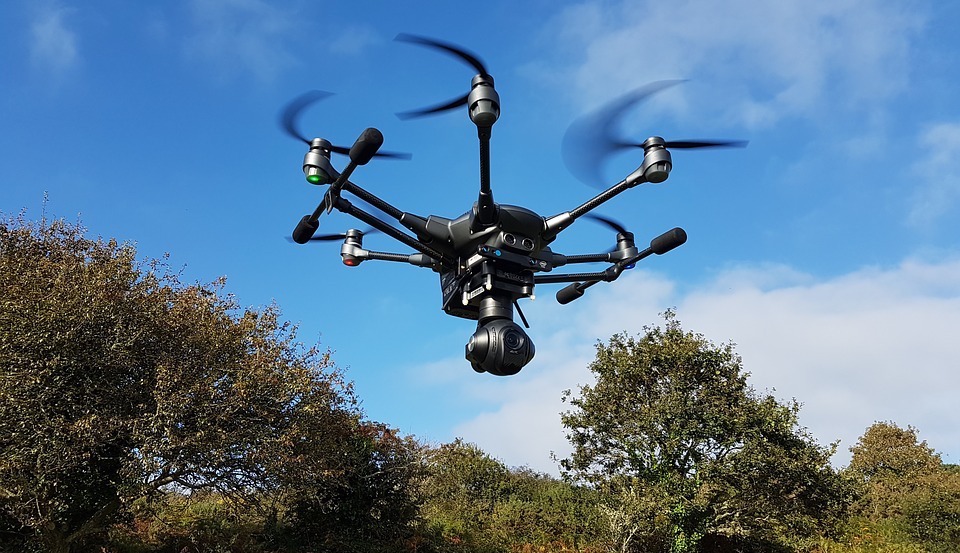 by Joseph Flynt
Posted on January 23, 2018
13 Shares
3D Insider is ad supported and earns money from clicks, commissions from sales, and other ways.
DJI has just released the Mavic Air 2. See all of the specs here.

From real estate to mining, drones are capturing the attention of every industry. People who have used these drones will know how easily some operations can be carried out with the help of these brilliant machines. Drone technology is being embraced and trialed by governments, big businesses, and even freelancing photographers. Its use in the recreational space is also gaining a considerable amount of momentum.

Let us look at many the ways in which drones are currently used.

Recently, an Australian lifeguard supervisor used a drone named “Little Ripper” to save two teenage boys who were trying hard to fight the waves and make it back to the shore. This happened in Australia’s Far North Coast in New South Wales. Someone at the beach saw the boys and alerted the guards. Within 70 seconds the drone reached the teenagers and dropped a self-inflating rescue pod in the waters below. This rescue mission is being applauded by people around the world and the state’s $340,000 investment in drone technology proved to be a worthy one.

Lifeguards may have taken comparatively more time to reach the teens, which means that the chance of saving their lives could have dropped if not for the speedy drone.

While this is a case of saving two lives, drones can be used in a similar way in disaster struck regions to provide people with food, medicine, supplies and other necessities. Depending on the scale at which the rescue missions are being operated, drones can also take the help of infrared sensors to look for humans or life-forms with the help of heat signatures.

China uses drones for quicker actions in earthquake-hit regions hoping to reach more survivors in time. Africa is not far behind and is also using drones to reach people in disaster struck areas. UNICEF is testing drones for aerial photography of disaster struck places as well as for delivering medical supplies to these areas.

This is one area where drones have been quickly embraced and are actively used. The entertainment industry and photographers at different levels of learning are using drones to capture beautiful scenes and moments. Many news companies are choosing drones to photograph disaster struck areas where it may not be feasible to send a person.

Aerial photography is now very popular for weddings and special events too. The 2016 Rio Olympic Games used drones for photographing and filming many major events. NFL teams are using drones for filming practices too. Other events like PGA US Open and X Games have used drones for capturing photos and making videos too.

Drones provide a new perspective to places or moments that have long been captured from the ground. Using the bird’s eye view is surely a more beautiful way of portraying many photos. These drones also have the ability to reach areas which are otherwise unreachable for humans. This is why drones have been doing so well in this field.

Instagram accounts like @droneoftheday, @airpixels, and @skynamicdrone provide users with some of the most amazing drone photographs showing how much drones can achieve in this area.

Aerial photos serve a very important purpose in topographic maps. Since places keep changing with time, aerial photos help cartographers map a region. This is often referred as photogrammetric scanning. Drones can be used for photographing the area aerially. Data from the drones can be quickly obtained. This is why survey businesses are beginning to use drones instead of relying on traditional methods.

The orthophotos and surface models obtained through drones can help the surveyors save time and quickly complete the survey for a region. Many surveyors see this as a cost-effective method of surveying where less manpower and even less time is needed to complete the entire work.

Drones are a farmer’s friend in more ways than one. Most farms are spread over many acres of land and farmers spend a lot of time trying to survey the farms for drainage or irrigation problems, diseases affecting the plants, the growth rate of the crops, and checking the soil quality. Drones are capable of doing all of this work and much more.

This makes them very suitable for farmers. Some drone startups are even beginning to trial the use of drones for planting the crops. Drones can also spray the crops with necessary insecticides or pesticides and they can spray nutrients to the ground quickly and very easily. The whole process is completed in less time making it more viable for farmers.

While drones require a one-time investment, they can serve many purposes, from monitoring the crops and soil to surveying the farm for intruders. They can also be used to keep an eye on the farm animals when they go out to graze.

Poaching is one of the biggest problems for wildlife conservation areas around the globe. While many technologies are researched and considered for eradicating the problem, one of the most effective ways of bringing an end to poaching has been through drones. But poaching is not the only reason why drones are gaining traction in wildlife conservation. There are other applications of these birds too.

Conservationists, Lian Pin Koh and Serge Wich co-founded the company, ‘Conservation Drones’ which is focused on using drones for biodiversity conservation. The use of drones for wildlife monitoring is more effective because they do not disturb wildlife and can easily cover larger areas.

In one instance, biologists at the Fort Collins Science Center, Colorado, used a modified former military drone to complete a population count of Sandhill Cranes in just 4 hours. The whole task was completed without missing or re-counting the cranes. It would have taken days for them to complete this task using traditional means of population counting.

Drones have the ability to strengthen a surveillance team’s ability to cover more area in less time and with higher accuracy. They can be used for surveying large festival areas or for countering illegal drug operations. Many private homes are also considering the use of drones for surveillance around the perimeter of the house.

The Police and Border Guard (PPA) in Estonia recently ordered 9 drones which will be used for keeping an eye on the border. They aim at reducing incidents at the border and quickly reacting to any situations arising in the border areas.

Whether you think of governments or private companies, everyone is looking at ways in which drones can be used for better protection of an area. They can also be used for monitoring and countering illegal activities like human trafficking. Fire departments have been using drones to survey regions affected by wildfires too.

Drones are a safe way of inspecting areas which are otherwise difficult or dangerous to access. Construction projects and building managers are using drones to check the progress of buildings and to construct 3D models of projects. Building managers are using drone technology to identify weaknesses in a building and take quick action to avoid problems at a later stage.

Insurance companies are considering the use of drones for inspecting damages in areas or to inspect homes before providing insurance cover. While traditional methods of inspections are time-taking and can be dangerous for the person carrying out the inspection, drones can complete the inspection much faster.

Another application of drones for inspection is in industries which utilize pipelines, cell towers and railways. Using a drone, people can safely identify problems in:

The only limitation is that drone technology cannot be implemented in areas near airfields and airports.

The port of Rotterdam in Holland uses two drones to make sure that the seas are being regularly inspected to ensure the smooth working of the port.

Governments and non-government bodies are beginning to find drones to be of great help when it comes to monitoring and protecting the environment. Drones can take up a wide spectrum of responsibilities which can help in saving the environment and identifying problems at an early stage. These include:

Companies like BluMetric Environmental have already completed environment assessments using drones in the area of Nunavat, Canada. Lauren Fletcher is a NASA engineer who uses drones for replanting forests around the world.

Amazon used its Prime Air Delivery service to fulfill a customer order in the UK using a drone. Domino’s also made it to the news when it delivered a pizza with the help of a drone in New Zealand. California-based company, Zipline, is working in collaboration with African governments to deliver blood supplies to remote areas clinics. Maersk Tankers used a drone to send supplies to a ship off the coast of Denmark.

Drone deliveries in USA are still limited because of strict FAA regulations. However, there are 6 regions in the US which enjoy some flexibility in the rules as they are considered as “Designated Test Sites”. Nevada is one of these regions. 7-Eleven partnered with the drone company, Flirtey to deliver donuts and a slurpee to a customer in Nevada.

Private companies as well as government authorities are conducting research and beginning trials to deliver products using drones. This application of drones is still to be researched and has a lot of growth opportunities.

Many organizations are now looking at drones as a means of developing less invasive-methods of mineral exploration. It requires researchers to take hyperspectral images and also involves Structure from Motion photogrammetry. This helps researchers identify the structural pathways of mineralized fluids ensuring that projects are accelerated through the use of drones.

Drones require much less time to collect data for a specific region. The overall costs of surveying goes considerably down and quarry operators are also able to create a safer work environment using drones to access regions which would be dangerous for humans.

Drones can also be used for performing quarry volume calculations and to measure extraction volumes. The data collected by drones is very useful for mining because of the level of safety they provide.

12. Drones in the Military

Drones were created mainly for military purposes. Their use in all other areas that we have discussed above is but secondary. Countries at war have been using drones for a substantial period of time dating back as early as World War I. Drones made a lot of sense in wars given the fact that the life of pilots don’t have to be risked.

Today, drones are available in many forms and sizes and are used by numerous countries around the world. They have played a role in predicting conflicts and also in helping countries fight wars with fewer casualties.

Drones which are often termed as Unmanned Aerial Vehicles (UAVs) are a brilliant invention. They have been able to provide many industries with a smoother and easier way of conducting operations. These birds can save a considerable amount of money and time completing tasks that would otherwise be difficult to accomplish.

Drones are already being used to transform several industries and helping governments handle certain problems with ease. Their use continues to grow and more industries continue to embrace drones, even as I write this article.

Joseph Flynt
I love diving into the latest and greatest in emerging technologies and seeing what they can do. I enjoy running when I'm not thinking about tech.
5 comments
Share now:
13 Shares
YOU MAY ALSO LIKE
SEE MORE