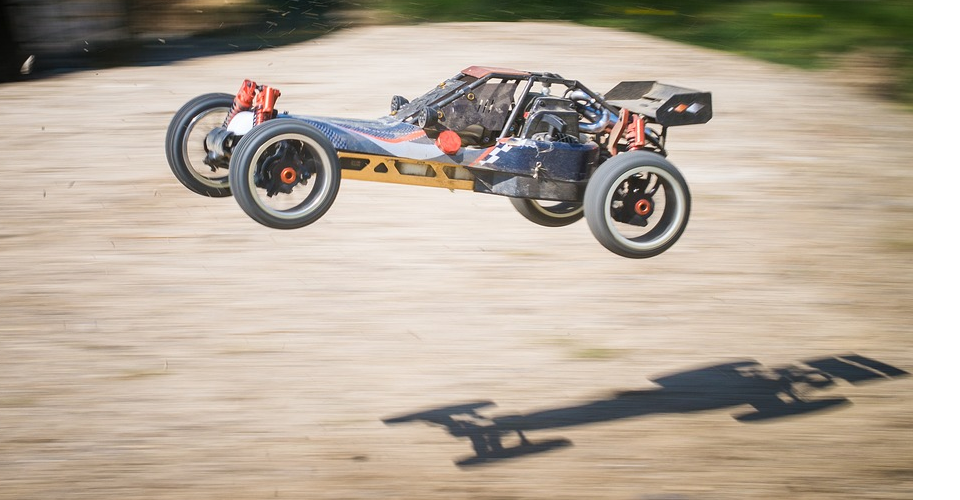 by Joseph Flynt
Posted on March 22, 2019
17 Shares
3D Insider is ad supported and earns money from clicks, commissions from sales, and other ways.

How fast do RC cars go? It’s a common question asked by enthusiasts, and there’s no single answer. Better questions are how fast can remote controlled cars go, or can I make my model go faster. This short, non-nonsense guide covers it all. You’ll know if your car can go faster—or not—by the end of this page. You will have a decent understanding of where these models get their speed from.

I also include a few current examples of some favorite fast moving vehicles.

Most RC cars can go faster than when they arrived with their stock parts. Some have modular designs that are easy to maintain and upgrade. That’s because modular models consist of several removable parts called modules. It’s also possible to tweak basic RC vehicles, at least in part. It will all make much better sense by the end of this page.

Here are the seven factors that contribute to the speed of an electric RC car:

Now let’s break down the points above into plain English. 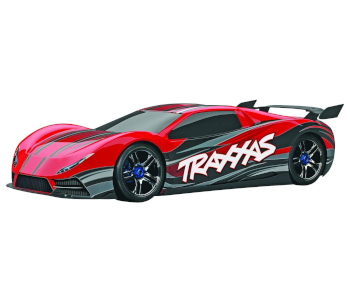 It’s important to understand RC power. Acceleration and maximum speed are not the same thing. You can improve both, but an increase in one often leads to a decrease in the other.

Acceleration is how fast the model can gain speed within a short time. It’s often referred to as 0-100mph in x number seconds. Take the Traxxas XO-1 as an example. This sporty beast can go from 0-100mph in just under 5 seconds. It has incredible acceleration and top speed, but it’s an extreme example. Acceleration is vital if you race in small areas or have short straights and lots of bends.

A faster top speed, therefore, is best suited to racing in larger spaces. Long straights let you reach and sustain such speeds. The Traxxas Unlimited Desert Racer 4X4 is an excellent example of a fast RC car. Don’t forget that driver skills also play a role in controlling fast cars.

The quicker the car the higher the demand, especially those that exceed 100 mph. They’re harder to come by because of that. Below are a few more examples of high-speed RC cars, trucks, and buggies. These are stock speeds, but achievable speeds—after upgrades and fine-tuning—can be much faster:

The rest of this page looks at knowledge, physical features, and the tweaks that influence speed.

The bigger and heavier the RC car, the better its powerhouse needs to be. Size inevitably has an impact on how fast the model can move. Vehicles that weigh more have slower acceleration and top end. Cars that are too small and light, though, are harder to control, so makers often need to compromise. Large scale models typically cost more to upgrade and maintain than smaller ones.

Beginners to the world of RC often overlook scale sizes. I know this by the feedback they leave in comments sections. The model is either much bigger or far smaller than they thought it would be. This buying blunder is so easy to avoid. A scale model is typically a smaller replica of the real-world vehicle. Examples are 1:8, 1:10, 1:12, 1:14, and so on. The higher the second number, the smaller the replica.

Let’s use a 1:10 scale as an example. In this case, the RC model replica is 10 times smaller or (1/10th) the size of the original. Remember, scale sizes are relative to the full-size vehicle. That means a scale size can vary hugely depending on what they replicate. Always check the car’s dimensions and weight as well. This way you get to avoid those size surprises when the product arrives.

Those who sell RC cars often advertise the scale speed of a model. There’s nothing wrong with this per se as it tells experienced RC’ers how fast the vehicle can go. For the uninitiated buyer, though, it can be misleading—sneaky even. An example scale speed could be 100 mph for a 1:10th scale car. The real-world speed in this case would be just 10 mph. Some sellers still show the actual speeds. 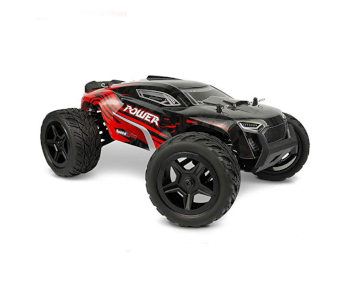 Radio controlled cars use either DC brushed or brushless (BLDC) motors. Brushed motors are an older technology that can still pack a punch, but there’s a problem. The friction of brushes inside the motors takes power that could otherwise go toward speed.

Brushless motors don’t lose electrical power to friction and brushes because there aren’t any. That makes them superior in several ways. They’re quieter, more power-efficient, last longer, and need little or no maintenance. Brushless motors, therefore, convert more of their electrical power into mechanical energy. The extra efficiency is somewhere around the 15% mark.

The two types of batteries used in RC cars are Nickel Metal Hydrate (NiMH) and Lithium Polymer (LiPo). Batteries are vital considerations and impact the running of an RC car in three ways:

The following sections explain what to look for in a battery and the reasons why.

NiMH batteries are cheaper, safer to use, and easier to maintain than LiPos. Performance-wise, though, they’re not in the same league. NiMH cells have a lower energy density and are generally less efficient. LiPos are the way to go if you want to improve the oomph of a car. They’re lighter too, and that also helps with speed. I won’t get into the technicalities here as we have a page dedicated to RC batteries.

Never overlook a model’s battery compatibility, i.e., power and fit (dimensions). Can your model handle the extra power? Not all RC cars can. Contact the seller if you’re in any doubt. Or, upgrade with caution and don’t only jump to the battery with the highest output. For example, if the stock battery has a single cell, opt for a 2 or 3 cell upgrade first.

RC batteries come in different shapes, sizes, and with various or no connectors. Make sure the new one is the right fit for the battery compartment. Check the specs or measure it if you’re unsure.

A significant buying consideration is battery life, also called playing or running time. The makers may advertise their model at X number of minutes on a single charge. They base the maximum life of a battery on ideal conditions, and not flat-out aggressive racing. View running times as overly optimistic and expect a little less than advertised.

The more power and speed an RC model has, the faster its battery drains. There are two things to consider here. One is the time it takes to recharge. Charging times can vary hugely and range from 30 minutes to several hours. Most RC’ers invest in extra batteries because of short running times and long charging. It’s always a good idea to check both the cost and availability of upgraded batteries.

Upgraded gearing can increase maximum speed, acceleration, or both, of an RC car. There are two gears to consider here. One is the pinion gear and the other the spur. A smaller pinion gear and larger spur will increase acceleration, but it may shave a little off the top end. A larger pinion and smaller spur is the way to go for faster top speeds, but it can result in slower acceleration.

#6 Tires can slow you down

Tires also play a role in how fast an RC car can go. The ones a model come with are not always the best set for it—performance wise. The reason makers put ‘average’ tires on stock models is to get enthusiasts to upgrade. It’s a sneaky tactic considering the price of some hobby-grade vehicles.

Low-quality tires have weaker traction and are not so durable. Premium tires are the opposite and more cost-effective in the longer term. Cars can reach higher speeds and handle corners and bends better with improved tires. Get to know which tires and diameters work best for your model. Reach out to the RC community if you need guidance on either wheels or tires.

Many factors contribute to the speed of an RC car and surface is one more. Uneven and loose surfaces slow a vehicle down by a considerable amount. Wet, damp, or dry ground are other factors. So, how fast your RC model goes depends on the ground and its compatibility with that terrain.

I want to close by drawing distinctions between nitro and electric RC cars. The significant difference between the two types is the power source or fuel. The cars talked about in this guide have motors that need electricity to run. They get this from battery packs. Nitro RC vehicles have engines instead of motors. Their fuel source is methanol-based and contains something called nitromethane.

Nitro engines and fuel are the RC world’s equivalent to gasoline engines in the real world. Electric and nitro-powered RC cars are different in a few other areas too. These include the chassis, drivetrain, center of gravity (COG), weight, runtime, and of course the upkeep.

The decreasing popularity of nitro RC

Only the most dedicated enthusiasts get involved with Nitro RC. Most gas-powered vehicles are bigger and faster, but they also need more maintenance. However, the technological advances in electric-powered cars have stolen the spotlight from Nitro RC.

Today, the world fastest speed record goes to an electric model called the RC Bullet, built by Nic Case. It’s the first of its kind to break the 200 mph barrier. This incredible feat occurred on October 25, 2014, in Saint George, Utah, USA. The clocked speed was a mind-blowing 202.02 mph (325.12 km/h).

How to measure the speed of an RC car

You can measure the speed of an RC car using a radar like the Velocity speed gun. Another, more traditional way, is to use a GPS Receiver. The Garmin eTrex 20x is an excellent example. These multi-purpose receivers can also display other data like path and additional speed details.

The downside with this method is that the device is too big and heavy to fit into smaller models. The additional weight is also sure to affect the top speed and acceleration to some degree. Finally, there are other data logging gadgets like the SKYRC GPS Speed Meter for RC.

So, the answer to the question, ‘how fast do RC cars go,’ depends on many factors. What we know is that most modified RC vehicles can go faster than their stock arrangement. You need to decide if you want faster acceleration or maximum speed. That’s why track, surface, and the type of RC model need careful consideration. Skill also plays a part. Remember, skilled RC’ers can win races with slower cars.

Speed is not everything, and the faster the car, the harder it is to handle. Tweaking and fine-tuning is tremendous fun if you know the limits and have realistic expectations.