by Joseph Flynt
Posted on July 4, 2013
17 Shares
3D Insider is ad supported and earns money from clicks, commissions from sales, and other ways. 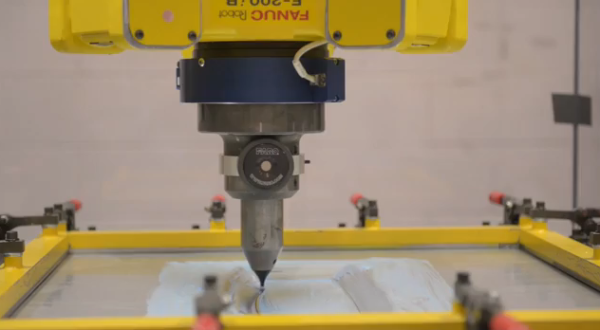 Engineers at Ford are currently developing a new highly flexible patented technology for rapidly creating sheet metal parts for low-volume production applications. Ford’s new technology will allow for lower costs and ultra fast delivery times for prototypes that will now take three days whereas they used to take anywhere up to six months to be delivered.

The process is called Ford Freeform Fabrication Technology (F3T) can make a 3D object in a matter of hours rather than days or weeks that were needed prior to the technology. It works by a piece of metal that is clamped around its edges and is then formed into a 3D shape by two stylus-type tools working in unison on opposite sides of the sheet metal blank. This new prototyping machine functions similar to a digital printer, after the CAD data of a part are received, computer-generated tool paths control the F3T machine to form the sheet metal part into its final shape to the required dimensional tolerances and surface finish.

“The technology behind F3T is yet another example of Ford leading in the advanced manufacturing space,” said John Fleming, executive vice president, global manufacturing and labor affairs. “As we forge ahead with cutting-edge technologies in manufacturing like flexible body shops, robotics, 3D printing, virtual reality and others, we want to push the envelope with new innovations like F3T to make ourselves more efficient and build even better products.”

Currently the F3T machine is not fast enough for Ford to use it in mass production and is limited to prototypes or low-volume production applications only. Ford hopes that the technology will eventually be used by aerospace company’s, the defence force, transportation company’s and appliance makers.