by Joseph Flynt
Posted on May 2, 2019
13 Shares
3D Insider is ad supported and earns money from clicks, commissions from sales, and other ways.
DJI has just released the Mavic Air 2. See all of the specs here.

We live in a world obsessed with green living and small carbon footprints. But that doesn’t mean we can’t have a little fun and enjoy gasoline powered drones, does it? Quadcopters that run on gas are virtually emission-free compared to gas-guzzling cars, trucks, buses, and motorbikes.

The question you may have is why even bother? After all, battery-operated drones provide us with everything we need, don’t they? Well, not quite. Before we look at the tiny handful of gas-driven alternative quadcopters, let’s first take a look at their advantages over battery-powered options.

The Benefits & Drawbacks of Gas-Powered Drones

The main advantages of gas driven drones are:

These petrol beasts do have their drawbacks and critics. They’re certainly not for the faint-hearted. The major drawbacks of gas-powered drones include the following:

Do You Need a Gas-Powered Drone?

Only you can answer this but here are a few pointers that may help you to decide. These bigger and stronger gas drones are more fun yet more challenging to fly—if piloting is your thing. They are more “hands-on” so you get to learn plenty and become involved in regular maintenance and tweaking.

Here are four of the mostprofessional uses of engine drones:

The majority of these drones use readily available types of fuel like unleaded gasoline. Some even use two-stroke motor oils. Less common are the higher-end drones that run on nitro-based fuels. The biggest frustration with battery-powered drones is recharging. Sometimes it can take two hours or more. Well, it only takes a few seconds to refuel a gas-powered drone and away you go.

Fuel costs more than batteries over time so that’s something to think about if you plan to fly often. Carrying extra batteries is not a big issue unless it’s DJI, in which case they’re very expensive.

Decision Time – What's It to Be?

Electric drones are more economical to buy and run than most gas-powered alternatives. Both types of crafts have their advantages and disadvantages (see above). Making a choice should be easy once you understand your needs, budget, and exact expectations.

The table below shows the four very capable gas-powered drones as they appear in this short guide. 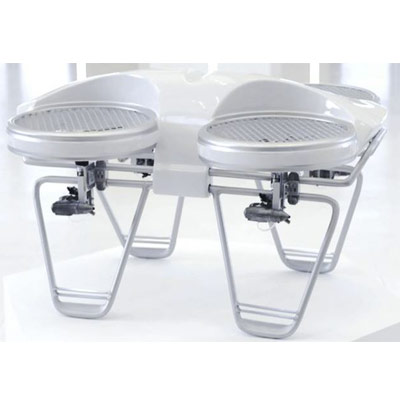 The team behind the Yeair project tells us to expect great things. It has more of what we demand, they say. That’s more style, more flight time, more speed, and more payloads. Are they right?

This two-stroke combustion engine hybrid quadcopter project is so refreshing. It’s like writing about a more conventional battery-operated drone—plus some. Think about all the common gripes with electric drones—then remove them. That’s the Yeair quadcopter. No more moaning about pitiful flight times, long charging times, slow speeds, and tiny payloads. Let’s look at some of those claims.

The Yeair’s fuel tank holds 1.5lt of gasoline. There’s also a tiny 1,250 mAh battery onboard but you won’t have to recharge that between flights. The two-stroke engines make sure the battery stays fully-charged. And the quad’s electric motors are responsible for starting the gas engines. It’s all clever well-coordinated stuff of a hybrid.

The Best of Both Worlds

You can expect the combustion engines to keep the Yeair airborne for a whole hour on a full tank. And boy is this puppy fast. It boasts a top speed of 100 Km/hr or 62 mph. Electric-powered drones have been the most reliable up until now. The promise of the Yeair is to combine reliability with power. In other words, this is the quadcopter that delivers the best of both worlds.

The 55 km (34mi) range is also incredible and a major selling point. Most makers of electric quads measure the range in meters. The maximum 5kg payload is no minor detail either. A few of the other key features include the next-generation GPS, programmable LED lights, lift-up legs, and WiFi.

Who Is the Yeair Hybrid Quadcopter For

I can’t think of any enthusiastic drone pilot who wouldn’t love the Yeair. However, its target buyer is industry due mainly to its potential to serve.

Here’s a shortlist of the industries that could benefit most from this hybrid quadcopter:

The sky’s the limit but the three industries above will find this drone a particularly useful tool. There’s a lot going on with the Yeair which has something appealing for all drone pilots—aside from the price. Still, the cost is subjective and depends on who wants it for what purpose.

The work is done and the testing complete. The Yeair is now ready for mass production the moment the campaign reaches its target. This unusual looking bird is going to turn many heads and make a lot of drone makers sit up and take note. Alas, it’ll be outside the budget of most hobbyists with its anticipated price tag of over $1700. I doubt the cost will deter industries though.

The only other gripe, at this moment, is the noise level. Gas-powered drones do make quite a racket compared to battery operated models. Not that noise will be a deterrent for Yeair fans. 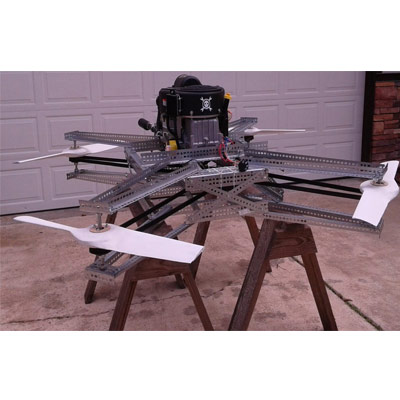 You have to see the Goliath Quadcopter to believe it. It looks like a giant Meccano DIY project for adults. It kind of is, but it’s also a serious prototype with a lot of practical functions.

The Goliath Quadcopter packs a lot of oomph with its 39HP engine. Those who get their hands on one of these beasts will be happy to know they have lots of control over their investment. Being able to customize the open source software and flight controller is a huge appeal to a project like this.

A good old-fashioned gasoline-powered V-twin lawnmower engine takes the Goliath up and away. We expect it to be a capable flyer despite the size and heft, thanks in part to the aluminum frame. The earlier Mk-I prototype frame used heavier slotted galvanized angle, which is a cheaper alternative to stainless steel. There have been plenty of changes and tweaks along the way as with all prototypes.

The newer lightweight frame and the more powerful engine should make the Goliath a workhorse. I’ve read somewhere that the ambition is to reach a maximum of 40 lbs. payload capacity. Unfortunately, I wasn’t able to find the top speed goals at this point. Watch this space because things can and sometimes do change overnight.

This is not the kind of project you can play around with in a backyard or at a local park. It’s a real enthusiast’s project and aimed at those who really know what they’re doing. It’s certainly not for the faint-hearted that’s for sure. It’s big and heavy compared to electric quadcopters. There are potential dangers and disadvantages to the craft’s heft. 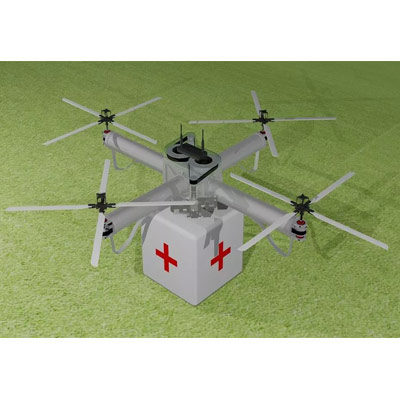 We have mechanical engineering students from San Joe in California to thank for the Incredible HLQ. It began life as a model in a Kickstarter campaign and it seems like things have been paying off.

HLQ is short for Heavy Lift Quadcopter. There were 211 backers at the last count who pledged a total of $11,538. It’s going to be interesting to see how the final project comes to life. The idea is to produce a powerful gas-driven quadcopter that’s capable of lifting and delivering payloads up to 50 pounds. That’s quite an ambition and has a potential for many practical applications.

How the Incredible HLQ Flies

The power comes from a couple of two-stroke engines with 12.5 HP each. This may not sound a lot but combined these two engines provide—or should provide—plenty of power and stable control. There are four commercial helicopter rotor heads used in the construction each equipped with 435mm blades. Aluminum tubes form the frame at the time of writing but remember this is still at the prototype stage.

The team has used the open source Ardupilot module for the flight controller. This is handy as it’s easy to reconfigure things during tweaks and testing.

The Incredible HLQ is a pretty large quadcopter and that means it loses points on portability. The two 2-stroke engines are likely to guzzle a lot of gas too and that’ll restrict how far the quad can fly. From what I can see it’s going to be heavy and noisy even after project completion. 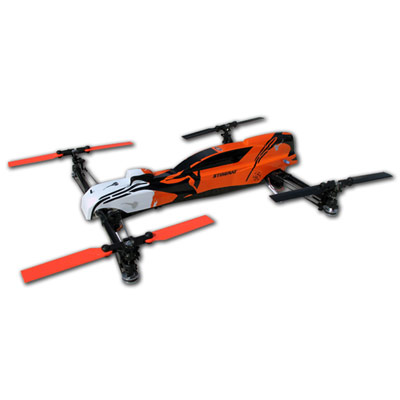 There’s actually an electric-powered version of the Nitro Stingray. This special gas-powered model is an alternative to that but why would you bother?

The Nitro Stingray is a strange looking beast powered by a powerful 2-stroke Scorpion motor. Pilots like this drone for its reliable stable flying helped by the 110mm blades on each corner. The stable performance of this consumer quad makes it a good choice for aerial photography.

The dedicated controller gives a pilot full control over the craft at all times. It can do a lot of what the electrical version can do but with more effort and careful control. I’m not sure about the quadcopter’s overall appeal though.

Pilots can perform all the usual 3D stunts and traditional maneuvers. The main difference is that the flying experience is extra engaging. The result is a more realistic flight sensation compared to the electric alternative. If that appeals to you then the Nitro Stingray could be right up your alley.

The Nitro Stingray is as noisy asa swarm of angry hornets. It’s not a beginner’s craft either. It has the ability to fly and perform better than the electric alternative but it’s harder to master.