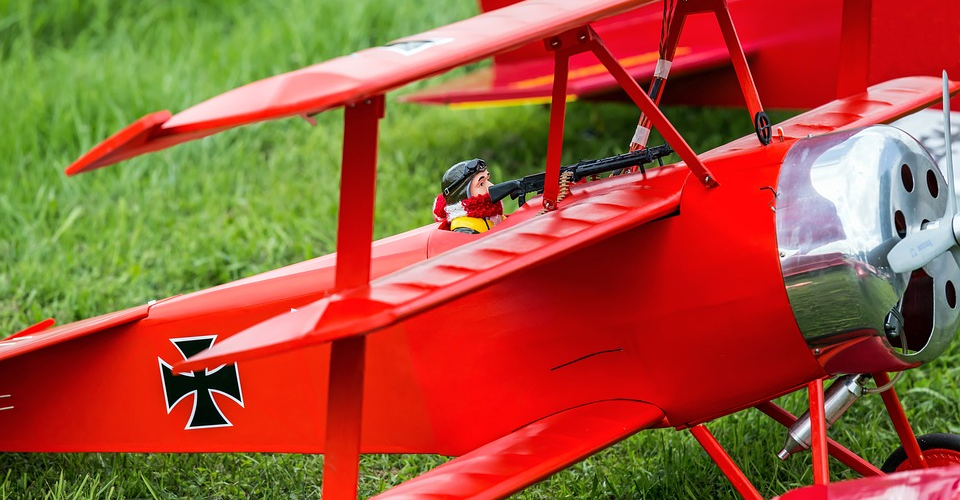 by Joseph Flynt
Posted on June 29, 2019
13 Shares
3D Insider is ad supported and earns money from clicks and other ways.
DJI has just released the Mavic Air 2. See all of the specs here.

Big is not always better, but when it comes to radio control aircraft, it usually is. This guide uncovers the word of giant scale RC planes and the folks who fly them. So, how big is big in this context? Well, some models are large enough to accommodate a kid. Not that you’d send a child up in one of course. The 85% scale Pitts Python biplane is one such model, but there are others.

Human fascination with flying goes back a long way. Indeed, by 1000 BC, the Chinese were flying and competing with kites of all shapes and sizes. Kite flying is still prevalent in many parts of the world. But it’s the advances in model plane technology that now tempts us into the virtual pilot’s seat.

Flight—in all its forms—has fascinated us for eons. Flying model aircraft has a long history that goes back as far as 1871. It all began with a French pioneer of aviation called Alphonse Pénaud. He invented a flying aircraft powered by twisted rubber that he named the Planophore. It was to be the first known flying model that was aerodynamically stable. The Planophore flew 181ft in 11 seconds.

The lure of model aircraft continued to grow and gain momentum over time. However, RC planes only became accessible to ordinary people toward the end of the 19th century. The rest—as they say—is history. Now anyone can fly thanks to advanced technology, high demand, and low prices. The growing attraction towards giant scale RC planes is taking this hobby to a whole new level.

Who Gets to Fly Huge RC Airplanes?

These massive flying machines are not for the faint-hearted. Only highly skilled R/C pilots can take to the sticks with these big beautiful birds. You won’t find them as ready-to-fly (RTF) versions on popular shopping sites like Amazon either. It’s a niche hobby with a smaller profile than regular scale models. And you can’t just visit the local park and launch a giant-scale R/C plane (see below).

Fans of gigantic radio control planes also construct them. It can either be from a custom plan or a pre-prepared kit. The former is for those who prefer to source each part and build from the ground up. 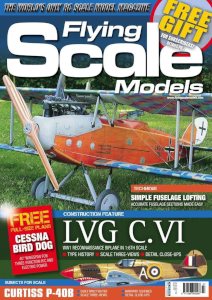 There’s an excellent bi-monthly magazine called Flying Scale Models. It has a British theme to it but don’t let that put you off. Most issues include free plans for specific planes. It also covers some lesser known birds. That’s something to think about if you want to stand out from the crowd. It’s the go-to publication for RC fans who love—or would like to get into—scratch building (see below).

Scratch building is a term used to describe creating a model aircraft from scratch. That means sourcing all the parts and components rather than building from a kit. The mag’s not exclusive to giant scale models, but it does include them along with all the other plane types. The editorials, tips, techniques, and tack-sharp color details make this the best publication for scale model aviation bar none.

There are tight restrictions on where an RC giant plane pilot can and cannot fly in the US. There is currently two ‘Academy of Model Aeronautics’ (AMA) recognized organizations. Both support flying giant scale model planes with updated information and national events.

OK, let’s take a brief look at each one and how they support the hobby.

The International Miniature Aircraft Association (IMAA), exists to serve large scale planes and pilots. It promotes safe operation and an informal environment for enthusiasts to meet and fly. The IMAA has a packed calendar for its members every flying season. Pilots attend non-competitive events like ‘Rally of the Giants’ sponsored by the IMAA. These gatherings are all over the US.

Below are the basic requirements to partake at these functions:

A 1/4 scale RC aircraft (or larger) is also permitted even if it doesn’t meet the size requirements above. Any model branded ‘IMAA Legal’ meets the IMAA criteria and can fly at its events.

The International Miniature Aerobatic Club (IMAC) began as a special interest group. Today, it has a broader appeal. IMAC invites RC enthusiasts into the world of competitive scale aerobatics.

It has five classes of competition as follows:

Some events may even host freestyle and senior (over 55s) competitions. So, the IMAA requirement relates to size and scale, whereas IMAC here is all about competing.

Building a giant RC plane is part of the fun. There’s a real sense of pride when pilots fly a large-scale model created by his or her own hands. Ideally, you want to gain experience with smaller planes first and have a basic understanding of how they work.

Some plans are free, whereas others charge a nominal fee. Familiarize yourself with them so that you can make informed decisions. Below are a few options to consider, though there are many others.

These are full-sized, 36” wide, rolled plans for the giant scale Gee Bee Zeta. It’s a gorgeous airplane from a golden era. The detailed procedures are easy to follow for this 72-inch wingspan beauty.

These are for a 1/12 scale plane. You get the complete plans and patterns needed to cut all the parts. There’s a choice of fixed gear or retracts. It’s an impressive model aircraft with a large-scale design.

It’s a giant scale model for a formidable WWII US flying bomber/fighter. The plans and templates for the Douglas A-20 Havoc also include full building instructions. You can make this awesome model for electric or glow power. Shipping choices include folded plans or rolled into a tube (recommended).

The Cost of Components

The parts and components of a giant scale RC plane are the items needed to complete the model. The main—and costliest—considerations are the engine and electronics.

Your new giant-scale model also needs some large-sized parts and components. Aircraft in this category tend to use gas engines over nitro. The reason for this is fuel efficiency as these models can burn fuel quite fast. Glow fuel is almost three times the cost of regular gasoline. One of the favorite engine choices for large plane fans is the twin cylinder Zenoah GT80.

The electronics also need careful consideration. Some plans and kits give suggestions, but they’re not set in stone. RC’ers love to tinker, tweak, and upgrade parts as they test and shape their new creation. Giant planes need high-torque servos on all control surfaces. Some models have substantial price tags too. Never skimp on the engine or electronics required to keep the aircraft safe.

Backup components are common so that pilots can still land the plane if something fails. Hobbyists often include multiple servos on control surfaces. Two batteries and two receivers are also typical. Other electronics are the same as all RC planes aside from bigger servos and failsafe systems. 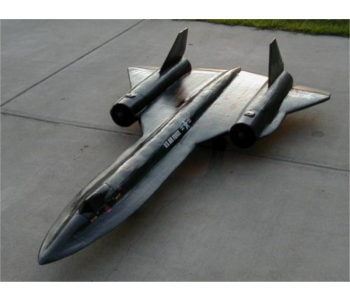 Q. What is ‘giant scale’ exactly?

A. Giant scale RC aircraft are huge replicas or real-world planes. There’s no fixed size or weight, but they do have to meet specific minimum requirements. The IMAA or International Miniature Aircraft Association class any plane that meets these requirements as IMAA legal. These are models that are true 1/4-scale (quarter scale) or have a wingspan of at least 80” or a 60” wingspan for a biplane.

Q. How is scale calculated?

A. There’s a simple calculation used to find the true scale of any RC model airplane. All you do is divide the wingspan of the full-scale aircraft with that of the model. I’ll use a simple example to illustrate. Let’s say the full-scale plane has a wingspan of 25ft and the model is 5ft. So, 25/5 = 5. The answer then is 1:5, so, in this instance, it’s a 1/5 scale model.

Q. What is a true scale airplane?

A. True scale aircraft are replicas of the real thing with weight and size being the only differences. The attention to detail that goes into true scale models is incredible. That’s why some of these planes take years to build. You can imagine how nervous pilots are on those maiden flights.

Q. How can newbies to the hobby fit in?

A. Giant scale RC plane enthusiasts love to marvel over each other’s models. There are plenty of ice breaking conversation starters for newbies. The classic questions asked at events are how long did it take to build, and how does it fly? Wingspan, weight, engine, and radio systems are other discussion starters. Scratch builders tend to be the most interesting and respected in the community.

Q. Can a novice learn to fly with a giant-scale model aircraft?

There are no laws to say you can’t, but some clubs may insist on prior experience or a personal tutor. It makes more sense to get experience flying smaller scale models before moving on to the giants. However, check out some of the large-scale kits of ARF trainer planes if you can’t wait. Whatever you choose, make sure you have an experienced RC pilot to help, preferably with a buddy box (see next).

Buddy box (also buddy boxing) means there are two radio systems linked together. One transmitter is the ‘master’ and the other the ‘student.’ It’s a highly-recommended system used for pilot training.

A. Absolutely, but only if you invest in a quality product. The free app simulators are great fun, but they’re not much more than that. A full-featured PC simulator can help you to develop skills or improve existing ones. RealFlight® 8 Horizon Hobby® Edition is currently the best there is (see next section).

OK, these are a few of the FAQ’s asked by newbies on giant-scale model airplanes. You’re bound to have others. That’s why it’s so beneficial to join a community and or a local R/C flying club.

Reach Out, Ask for Help, Join a Community

It’s entirely possible to learn on your own, but why would you? Giant scale RC plane building and flying is a social pursuit. Enthusiasts love to get together and share tips, swap ideas, and help those who are stuck. The camaraderie surrounding this pastime is a considerable part of its attraction. Online training courses and computer-based flight simulators are other excellent tools that can help.

Let’s look at a brilliant example of a home-based flight simulator.

The RealFlight® 8 Horizon Hobby® Edition flight simulator or sim, is a phenomenal tool. It’s so much more than a game. This product genuinely helps giant plane RC’ers improve their flying skills. It’s a training program in every sense of the word. Here are some of its feature highlights:

The Software with an InterLink-X Controller costs around $180 at the time of writing. You can also opt for the software only if you don’t need the controller.

Giant scale RC plane building and flying can become addictive—in a good way. It’s a welcoming community whatever level you happen to be at. And you don’t need to own a plane to become a part of it. All you do is show a genuine interest, and you’ll be received with open arms. Register with a local forum or club, introduce yourself and start to interact. You’ll be glad you did.