by Joseph Flynt
Posted on November 15, 2018
15 Shares
3D Insider is ad supported and earns money from clicks and other ways.
DJI has just released the Mavic Air 2. See all of the specs here.

GoPro deals for Black Friday have leaked. You will be able to find the newest model, the Hero 7, on sale at major retailers. There’s no word on discounts for other models.

We were surprised when we learned that the Hero7 was going to be on sale. Last year, the only GoPro model that was on sale was the Hero5. The company deliberately chose not to discount their newest model. This year things are different and it’s to our benefit.

Update: The Hero7 Silver and the Hero7 White are both on sale at Amazon right now. These are not on sale at Best Buy or Target. 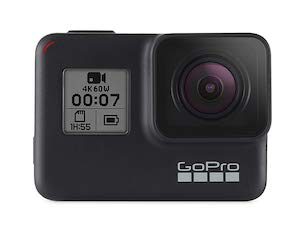 You can pick up the Hero7 at Target for the full retail price of $399. You will get a $60 Target gift card after purchase, which brings the effective price to $339. This deal is bound to be popular because the next best offer is from Best Buy. They are offering the Hero7 for $399 with a 128 GB Extreme SD card and a $30 gift card.

Both of these offers are quite similar, but it’s possible that you can find a 128 GB SD card for cheaper than $30 on Black Friday.

The GoPro Hero7 is a jump forward in action camera technology. It has a built-in gimbal style technology that will predict how you move and stabilize the shot. Just like the Hero5 and Hero6, the Hero7 is rugged and waterproof to 33 feet without a case.