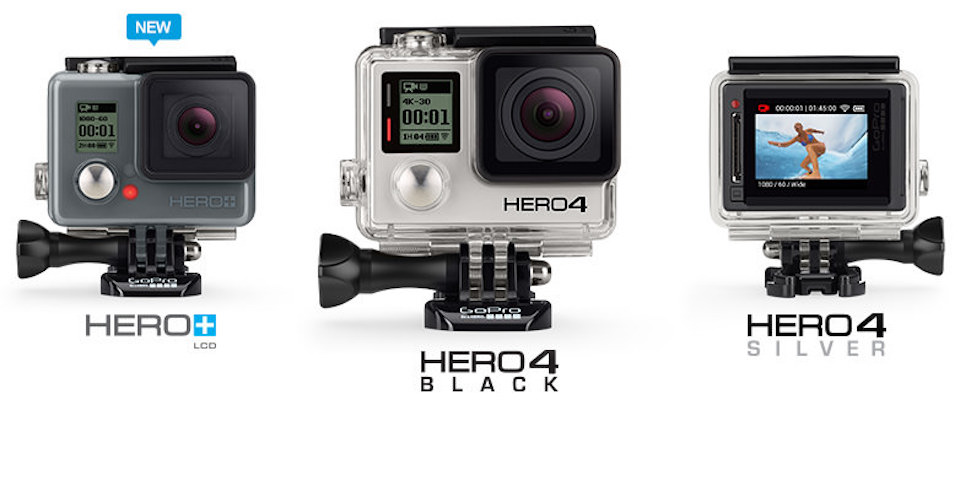 by Joseph Flynt
Posted on December 23, 2020
5 Shares
3D Insider is ad supported and earns money from clicks, commissions from sales, and other ways.

You only get one chance to record the most exciting times in your life so make sure you do it right. Using a GoPro camera is the best way to get quality footage when on the move, but the variety of models available can make selecting one difficult. That’s why we have compared the essential specs and features so that you will know exactly what you’re getting.

The whole point if a GoPro is to record your life’s most exciting moments. Now don’t expect to end up with thrilling video footage if the camera isn’t up to scratch. That’s why video resolution is perhaps the most important aspect of any GoPro.

We have compared the frames per second(fps) for each GoPros’ main video formats. These are (from lowest quality to highest quality) 720p, 960p, 1080p, 2.7K, 4K, and even 5K. Obviously, the higher the frame rate, the better the video quality.

While many people only focus on video footage, GoPro’s can actually be used to capture some excellent still photos as well. Check out the table below to see the Megapixels for each model’s camera.

Each GoPro Model weighs between 70g and 130g. Unless you’re trying to climb Everest, these differences don’t really affect anything, as 70g and 130g are both exceptionally light. However, what may matter is the size. You will find that the Hero 4 session and Hero 5 Session have a different design to the rest of the models. They are basically small cubes with dimensions of around 37.9mm (width) by 37.9mm (height) by 36.1mm(depth). This makes them approximately half the size of other models.

If portability is of utmost importance to you then the Hero 4 Session and Hero 5 Session are the way to go.

It’s hard to give exact figures when it comes to battery life because it depends on how you use your GoPro, the temperature, and the age of the battery. However, we have given some approximate figures below. These are for continuous recording of 1080p video with no other features turned on.

Be aware that enabling features such as Wifi, Bluetooth, and Voice control can noticeably reduce battery life. Repeatably turning a GoPro off and on also drains a lot of power.

Touch screens are handy to have as they make operation much smoother. In fact, people have become so used to using them on their phone and tablets that it can be frustrating not to have one available. Add to the fact that when you’re on the move, you don’t want to be messing around with clunky buttons. The Hero+LCD, Hero 4 Silver, Hero 5 Black, Hero 6 Black, Hero 7 Silver, Hero 7 Black, and the Hero 8 Black

all include this feature.

This is an awesome feature to take advantage off when you’re doing extreme sports or other challenging activities. Voice control allows you to give your GoPro commands without using your hands. The only models equipped with this feature are the Hero 5 Session, Hero 5 Black, Hero 6 Black, Hero 7 Silver, Hero 7 Black, the Hero 8 Black, and the Hero 9 Black.

Now there are some accessories that can allow GoPros to go even deeper. These are shown in the table below.

Now unless you’re a diver you will never be going beyond 10m of depth, so we don’t really think these figures are that relevant to the typical person. However, we do reckon its pretty handy for users to be able to inadvertently drop their GoPro into a water source without destroying it so, therefore…

Check out the approximate Amazon prices for each model below. These are subject to change without notice, so it’s a good idea to check for yourself. Also, note that these prices are for new models only.

The newly released Hero 9 Black is obviously the most expensive at $449. The rest of the models fluctuate a bit randomly in price. However, we see the cheapest deal on the Hero 3+ Black at $120.

Its decision time so checks out the total scores below.

What’s New with the Hero 9 Black?

The Hero 9 Black is the first GoPro camera with a front-facing screen. If you like taking selfies or vlogging, then this GoPro is a game changer. The build quality of the body is also quite rugged. The Hero 9 Black comes with a built-in mount. This is great because you no longer have to unmount the action cam to change the battery or memory card.

The Hero 9 Black is also the first GoPro camera that can shoot 5K at 30 frames per second. There are some enhancements via the Hypersmooth 3.0, which makes for smoother footage with the Hero 9 Black. There is also a new Time Warp feature that can speed up long timelapses and a Horizon levelling option as well. Lastly, there are new mods like ultra-wide, max lens, light mod, and display mod.

Which Is Best Overall?

It’s clear that the Hero 6 Black is the most powerful overall. It can record the best video footage (which is a GoPro’s primary function), so we can’t help but rank it at the top. It also includes a range of other convenient features such as a touch screen and voice control. Of course, it does have the steepest price tag. The Hero 9 Black looks great for vlogging and can be the best option if you have a budget of $449.

We reckon the Hero 5 Black is the best value for money. It is only $230 and has the second-best camera for recording video. It also has a touchscreen, voice control, and is just an all-around powerful machine. If you can’t quite afford the Hero 6 Black then just get the next best thing at around half the price.

Other Factors To Consider

If portability is essential to you, then you may want to consider the Hero 4 Session or Hero 5 Session. They are noticeably more compact than the other models and can slide in and out of your pocket with ease. And if you happen to drop them into a pool of water they will survive.

If you’re a diver then the Hero 5 Black and Hero 6 Black are still your best options. Just make sure you invest in an underwater housing system that can handle the pressure.

Joseph Flynt
I love diving into the latest and greatest in emerging technologies and seeing what they can do. I enjoy running when I'm not thinking about tech.
13 comments
Share now:
5 Shares
YOU MAY ALSO LIKE
SEE MORE