What are Headless Mode Drones?

by Joseph Flynt
Posted on September 19, 2017
11 Shares
3D Insider is ad supported and earns money from clicks, commissions from sales, and other ways.

The drone community has recently been hit with a fresh innovation: drones which come with headless mode. What is this mode, and how exactly does it help you fly your machine better? Let’s find out.

Deciphering the Direction of Your Drone

Here’s a problem that virtually every drone-pilot encounters at some point: when you’re unable to tell which part of the drone is the front and which is the back. Once the drone flies off into the air, it can be difficult to make out the differently colored forward and back legs of the machine, or to make out the LED lights attached to the front in the bright sunlight.

This confusion can lead to some nasty accidents. You think the drone is facing forward when its actually facing backward. You press the forward control, and the drone charges backwards, crashing into walls or trees and getting mangled. If the drone was carrying cameras or sensors, the cost of damage increases, and the work that needs to be performed by the camera has to be postponed. Clearly, something needed to be done to solve this problem of deciphering the right direction for the drone.

This is the problem that the headless mode on a drone addresses. And it does so with the help of the computer connected to the drone flight system. Basically, the computer keeps up a constant stream of calculations regarding the position of the drone while in the air.

If the drone starts to change its direction with relation to wherever you’re facing, the computer automatically corrects the drone’s position to align with yours. In essence, this means that headless mode ensures your right and left stay the drone’s right and left as well, so that you never have to deal with a drone that goes left when you press right, or forward when you press backwards. Having a drone stay with your perspective the entire time its flying prevents accidents.

This feature is very useful for amateurs who’re still trying to figure out how to fly the drone. The problem of changing drone orientation in mid-air can be difficult to fully grasp at once, and many drone are sent crashing into walls before the pilot learns his or her lesson. Headless mode eliminates the confusion and makes flying the drone easier.

Aerial filmmakers also like having headless mode on their quadcopters because it allows them to focus on getting unforgettable shots and not have to worry about the direction the drone will go in when they use the controller.

While headless mode can help greatly simplify the flying experience, it is not fool proof. The mode relies on a piece of tech known as a magnetometer built into the drone’s body to fly the right way forward.

If the drone passes near powerlines or areas with a strong electromagnetic field, the magnetometer experiences fluctuation which interferes with its navigational abilities. This causes the drone computer to get confused and send the drone hurtling in the wrong direction.

Another limitation is that FPV, or first person mode, is not compatible with headless mode. Thus, if you want to use FPV, you will have to learn to fly the drone without relying on headless mode. Having said that, you can turn of headless mode in many drones so that you can use FPV features.

Headless mode is usually found on beginner drones. High-end quadcopters often don’t have the option. If you are looking to learn how to fly then get a cheap headless drone.

Now the question is, whether you should invest in a drone model that comes equipped with headless mode. There was a time when the technology was brand new, when headless mode was only featured on the more expensive drones. But with its tech components becoming easier to manufacture, the headless mode feature is now available on many of the cheaper drone models.

A lot of factors need to be taken into consideration. Are you a drone-flying novice? Do you have trouble telling one end of the drone from the other? Do you often have to fly your drone across long distances in crowded areas?

If you are learning to fly a drone or you are flying in technically difficult terrain, then headless mode is awesome. It’s the perfect way to get the handle of your drone controls before you venture into regular flight, which can be hard to master.

Then there is the matter of FPV, which actually does a better job of drone navigation than headless mode. FPV drones may be more expensive, but they are much more reliable when it comes to flight navigation. If you’re looking for better control over the flight of a commercial drone, FPV can serve your needs better than headless mode.

A lot of quality headless mode drones have entered the market in the last few years. Consumers have a lot of selection to choose from. Below are some of the best headless quadcopters. 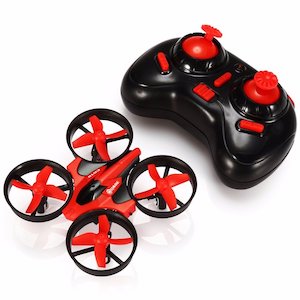 You can get a headless drone for around $20. The EACHINE E010 is a well-designed nano drone that is great fun to fly indoors. The E010 has an awesome return to home feature that makes it harder to lose your drone. With one click the drone will return next to the controller. It also has the ability to do 360 degree rolls which is great fun!

Since the E010 is a small micro drone it can only fly for 5 minutes before needing charged. Charging takes 30 – 50 minutes. You can buy additional batteries so that you don’t have to wait. This drone can be upgraded to have FPV, but the quality is not that good. Given how cheap the drone is many people still enjoy the addition. 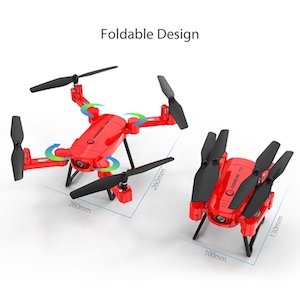 The GoolRC T32 is a great drone for people looking to spend a bit more for a better quality and larger drone. It’s marketed as a learner drone and it does what it sets out to do. People love the GoolRC T32. It comes with a 720p camera which is great for the price tag. The camera gives you real time FPV flying, which is unheard of in this price range.

The foldable design means you can fit the drone in tight places. Overall, this is a good mid-tier drone for beginners. 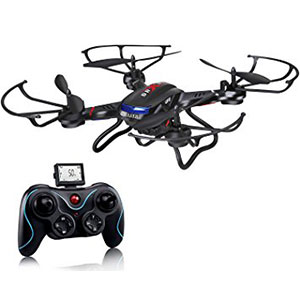 The Holy Stone F181 is perfect for people who want more features. It is crash resistant thank to the blade covers that come with it. Amateurs will be grateful for the added protection they provide in a crash. Although the drone only flies for eight minutes, people will be happy to have an extra battery they can swap in to keep flying. Eight minutes is actually pretty good for drones of this size. The range is about 50 – 100 meters allowing you to get higher to get cool footage.

The F181 comes with four modes. You can set it to have 25, 50, 75, and 100 percent power to making learning easier. People enjoy the great customer service Holy Stone provides.

An amusing opinion that many within the drone community seem to share is that using headless mode is somehow ‘cheating’! True pilots, it is argued, should be able to fly their drones without resorting to help from a computer.

This kind of thinking ignores the fact that innovation is the cornerstone of any flourishing technological space. The original drone itself was an improvement on existing helicopter designs. If newer drones carry the ability to help the pilot fly themselves, then this innovation should be embraced rather than shunned. Better control over drone flight means less crashes, more money saved and less accidents involving a drone amateur flying the drone straight into a passerby’s face!