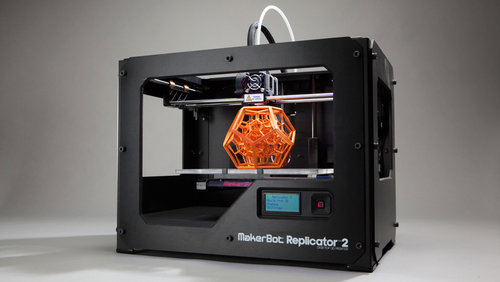 by Joseph Flynt
Posted on October 17, 2014
12 Shares
3D Insider is ad supported and earns money from clicks, commissions from sales, and other ways.

3D printing (Additive Manufacturing) has a bright future and it could be used to create anything from bases on the Moon to new organs for patients, but where did it all start. The manufacturing process has only really received widespread media attention over the past three or four years; however the first 3D printing process was developed over 30 years ago in 1983, by Chuck Hull.

Chuck Hull went onto found 3D printing giant ‘3D Systems’ in 1986 and further developed his stereolithography (SLA) printing process. Over the past 30 years, the SLA printing process has remained much the same; however the machines that use it are totally different. A UV laser still cures photopolymer resins/plastics to make a 3D object. Prior to Chuck’s invention, concept model required extensive time and money to produce. Additionally, Chuck also developed the STL file, format which is used by the majority of 3D printing software on the market.

The 1980’s also saw the development of another significant 3D printing process. While Chuck Hull was developing his SLA technology, Dr. Carl Deckard and advisor, Dr. Joe Beaman from the University of Texas, Austin were working on Selective Laser Sintering (SLS) printing. The two then went onto start up DTM, a company established to design and build 3D printers using SLS technology. In 2001, 3D Systems acquired DTM and ultimately the SLS technology. SLS uses a high powered laser to fuse tiny particles of a material into a 3D object. The laser fuses powdered material on the surface of a powder bed that is lowered by the layer height thickness after each layer is successfully completed.

Although fused deposition modelling (FDM) is the most popular printing process with lower end desktop 3D printers, it was actually developed after both SLA and SLS processes by S. Scott Crump in the late 1980s. Stratasys acquired and commercialized the FDM technology in 1990; however the popularity of the process took off when key patents expired and the open-source community began developing low cost FDM 3D printers.

During the 1990’s, the Massachusetts Institute of Technology (MIT) developed an additive manufacturing technique that incorporates a process where a inkjet print head moves across a bed of powder. The print head then selectively deposits a liquid binding material to fuse the powdered material together. In 1995, Z Corporation obtained an exclusive license for ‘powder bed and inkjet 3D printing’ (3DP). Z Corporation was then acquired by 3D Systems in 2012, along with 3DP process.

In addition to Z Corp’s acquisition of 3DP technology in 1995, a German institute began developing a process called selective laser melting (SLM). The Fraunhofer Institute ILT in Aachen, Germany created a process where thin layers of atomized metal powder are fused together with a focused laser beam. This all takes place in a chamber containing a controlled atmosphere of inert gas, either argon or nitrogen. The laser energy is intense enough to permit full welding of the metal particles and while the process sounds awfully similar to selective laser sintering, SLM’s ability to fully melt the powder into a solid homogeneous mass sets it apart. A similar process is electron beam melting (EBM), which uses an electron beam as the source of energy.

Many see Bio-printing as a completely new technology and the pinnacle of 3D printing; however the first patents were filed for it in 2003. Bio-printing involves the process of generating spatially-controlled cell patterns using an additive manufacturing process. The cell function and viability of the cells are preserved in a 3D printed structure that can then be used to treat a patient. Companies like Organovo have already printed functioning liver tissue that can be used for pharmaceutical testing.

Most low cost desktop 3D printers are only really available today thanks to Dr Adrian Bowyer, a senior Lecturer in mechanical engineering at the University of Bath in the UK. Bowyer founded the RepRap project way back in 2005 and in 2006 the RepRap 0.2 prototype successfully printed the first part of itself. The first official RepRap machine was the “Darwin”, which was finished in spring of 2007. A number of other creator’s from the RepRap community began building and 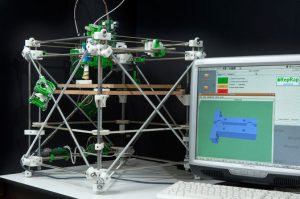 replicating the Darwin. By 2009, RepRap was ready to introduce the second official open source 3D printer, the “Mendal”. Around this time a number of different 3D printing enthusiasts began selling RepRap machines and parts on EBay. The “Prusa Mendal” was then introduced a year later, along with the RepRap “Huxley”.

Apart from the release of the RepRap Mendal, 2009 was the year that MakerBot made its first foray into the world of 3D printing. MakerBot started shipping kits in April 2009 and by March of 2011 approximately 3,500 units had been sold. The Cupcake was MakerBot’s first 3D printer 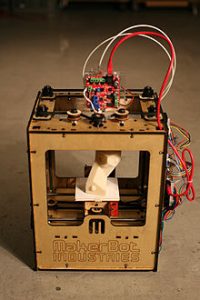 The first 3D printer has also made its way into the final frontier. NASA and Made in Space launched the first space 3D printer to the International Space Centre (ISS) in September 2014 aboard a SpaceX Falcon 9 rocket. The printer is being used to manufacture spare tools and parts, along with a number of other items.

Since 2009/2010 the cost of 3D printers has dropped significantly, with machines that used to cost $20,000 now being outperformed by machines that are priced at $2,000. Printers like the Micro 3D Printer from M3D and the PrintrBot Simple have opened up 3D printing to a whole new host of people who either couldn’t afford or didn’t want to invest in a more expensive machine. Prices will continue to drop and cheaper 3D printers will perform better with each new generation released. Consumer level SLA printers will become more widespread in the industry and the expiration of key patents surrounding printing technology like selective laser sintering could bring about a whole new range of low cost 3D printers capable of making objects in a vast array of materials.

Advancements in Bio-printing will undoubtedly lead to development of 3D printable organs and tissue; however this could be years, if not decades away in the future. 3D printing will completely revolutionize the medical industry and the manufacturing technique is already being used widely in the Orthopaedic industry.

3D printing will undoubtedly benefit engineering projects both big and small. Companies like Ford and agencies like NASA are already using 3D printing to rapidly prototype many of the concepts they have. NASA has already been testing 3D printed rocket injectors and supercar manufacturer, Koenigsegg are printing turbo housings for their One:1 car. 3D printing of buildings or aspects of buildings could become common in the future and we may one day see a 3D printed moon base.